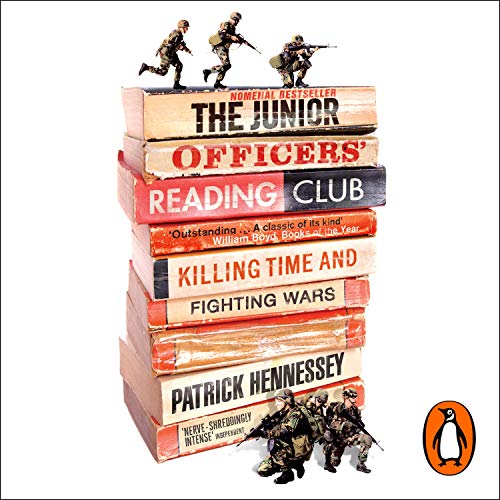 Patrick Hennessey is a graduate in his 20s. He reads Graham Greene, listens to early-90s house on his iPod and watches Vietnam movies. He has also, as an officer in the Grenadier Guards, fought in some of the most violent combat the British army has seen in a generation.

This is the story of how a modern soldier is made, from the testosterone-heavy breeding ground of Sandhurst to the nightmare of Iraq and Afghanistan. Showing war in all its terror, boredom, and exhilaration, The Junior Officers’ Reading Club is already being hailed as a modern classic.

What listeners say about The Junior Officer's Reading Club

This is a must.

As a former NCO, and subsequently commissioned Officern the British Army, this purchase was a no-brainer.

Patrick Hennessey delivers the book in such a beautifully 'Army' manner you could close your eyes and feel you are back in an 'O Group' (orders group).
His delivery is filled with charm and a boyish bounce which is often in stark contrast the the content.
You feel every ounce of his emotions, yet his stiff upper lip approach fills you with confidence that he is a good Infantry Officer. The type you'd fight for.

In contrast to your SAS war hero book, Hennessey delivers his heart in a way the kit monsters from the Regiment do not.
He would be a charming dinner and drinks companion and someone with whom you could chat away with for hours.

This is an absolute must.

Life on and off the 'Golden Square'

Excellent book, I would love to fault it but I cannot. Having attended RMAS at around this time I can recognise a lot of the individuals and the author has been true to their characters. The book was read in an easy, relaxed way which was great to listen to and one that brought it to life. Strongly recommended to any current serving officer or recently engaged, it will make you laugh, cringe and cry,a must buy if your about to go on tour as it will take you to a much nicer place.

Funny, sad, and most of all thought provoking.

From the heart of one of many brave men and women who serve our country. The ups and downs, highs and lows of what it means to be in the forces.

Why guilty? Because the author has the honesty to tell us the uncomfortable truth, that for some young men, there is nothing more exciting or exhilarating than killing.

This is a superb book about the rarefied world of British junior officers - Sandhurst and deployment, the whole "Rupert" experience. I'm not sure how much it can be taken as typical, but as a personal memoir of a short army career, it is excellent, and raises some important questions about both the army and society.

It is also very well written, cracking pace and structure. A book that will be added to the list of classic military memoirs.

A glimpse into the military subculture that is rare to get any insight into for those outside. At times exciting and very always easy to follow and with excellent narration. Do not expect an in depth exploration of the complex internal political forces of the region, but do expect a well told story and the occasional swashbuckling adventure.

A clear perspective of a Guard's officer

This was a well read piece which provided an interesting perspective from an officer's view point of the conflict in Afghanistan. The description of the training period rings true as does the time in Iraq and Afghanistan and what the lads have gone through out there. I have to confess the bits that I felt undermined the whole thing was the undertone of privilege that rings through and how the whole Oxbridge educated posh boy playing at soldiers for a while before going off to be something in the city does beginning to grate. I am probably being unfair and this probably reflects my own prejudice, further exacerbated by our current rulers who clearly know nor care what the rest of us go through on a daily basis, but I did find it a bit wearing in places. If he decides to come out if the army then it won't be a major life problem but for most of the lads who come back it will be much harder. On balance a good portrait of a Guards officer's time in a tough environment.

Would you consider the audio edition of The Junior Officer's Reading Club to be better than the print version?

I have not read the print version.

What was one of the most memorable moments of The Junior Officer's Reading Club?

The transition from the clarity and order of his early career in the UK, service in Iraq and first weeks in Afghanistan, to the intense fighting and raw emotions of the last few months.

Too many to choose from, and I'm not sure that 'enjoy' is the right word!

Excellent in all departments.

What was one of the most memorable moments of The Junior Officer's Reading Club?

When they ship out to AFG.

Hold on to your seats chaps!

Really interesting insight into the passage of officer, from recruit, through Officer training, to active service, culminating with time in Afghanistan. Reveals so much about the British Army, and the reasons why young men and women decide to commit themselves to army life. Highly recommended.

An enjoyable insight into Army life. I live near Sandhurst and its nice to hear of someone my own age reminiscing about our childhood era. A very interesting read

If you have ever wondered what a contemporary soldier is like; what he does and why, this may provide some of the answers. It is detailed, personal, witty and highly listenable.

While the book takes a brief tour of Hennessey's other military experience, it focuses on his time in the Afghan war. I ended the book knowing a lot more about how contemporary wars are fought, and having enjoyed some very good storytelling.

The socio-political background is better explained in Patrick Bishop's 'Ground Truth,' but this first-hand account is unmissable.

The author reads it, and his ironic, dark, dry wit may be clearer here than in the printed version (online reviews suggest that some hard-copy readers can't tell when he is kidding and when he isn't). This is an example of a work that is probably stronger as an audiobook than in printed form.

The book shows how the weapons, navigation, logistics and communications technology of the ISAF (the Western coalition) make firefights very one-sided affairs. However, it also spells out how dangerous life can be on the ISAF side. The author claims that the casualty rate in UK frontline infantry is about one in three. Official ratios count personnel who are not in close contact with the enemy and are thus much lower.

I should mention that, in common with some other reviewers, I also ended the book with a powerful dislike for the author. I don't think he intends this, and in an odd way, it is actually one of the book's delights. In that respect, it has something in common with Toby Young's 'How to Lose Friends and Alienate People.'

You won't find much about the lives, characters, motivations, emotions and thoughts of the author's friends and colleagues. I got the impression that he sees the rest of the human race simply as scenery: a collection of good blokes, odd blokes, Afghans and girls; all of whom are adequately explained and described in a sentence each. Which is probably handy if your job involves shooting people, but I wouldn't want to listen to him in a pub. I would have expected a richer view than this from a man with a first-rate education and who has been around people in extremes of fear and danger.

Whatever you make of the previous two paragraphs, I do recommend the book, and after listening to it, you probably will too.

Really enjoyed this audiobook. It is a well written and well narrated account of life on the front line and of particular interest to me was the honest description of the conflicting emotions the author experienced before, during and after his involvement in war. It gives a different perspective which I found refreshing.