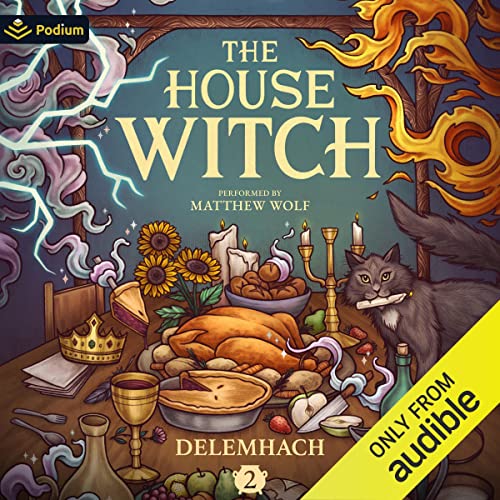 By: Delemhach
Narrated by: Matthew Wolf
Try for £0.00

House witch Finlay Ashowan must contend with matters of the heart, hearth, family, and kingdom in the second book of a whimsical and winning fantasy series

As a wielder of domestic magic, Finlay Ashowan likes to keep his affairs as neat and orderly as his kitchen. But between his work for the King and Queen of Daxaria and a new (secret) relationship with Lady Annika Jenoure, his life is anything but tidy.

For one thing, if Annika and Fin are to continue their romance, they’ll need to sort out the pesky issue of Fin’s being a commoner—before Annika is forced into a political marriage that interferes with her own carefully laid plans.

For another, pressure is mounting as the war with Troivack draws ever closer. When Fin requests time away from the castle to rest, the King agrees but under a very particular condition: Fin must brave the streets of Austice as a spy, sleuthing out the plans of the Troivackian troops allegedly hidden there.

Further complicating things, Fin’s estranged father is on his way to Daxaria, an unexpected and unappreciated arrival that’s bound to wreak even more havoc in his son’s life.

As Fin forges new friendships and alliances—magical and non-magical alike—he becomes even more enmeshed in courtly intrigues, old feuds, and very personal problems. And the more he tries to clean up the various messes in his life, the more apparent it becomes that his troubles are only just beginning...

The second volume of the hit romantic-fantasy series—with more than a million views on Royal Road—now available on Kindle, Kindle Unlimited, and Audible!

What listeners say about The House Witch 2

Not nearly as good as the first book

I loved the first book so much, I pre-ordered this one. The first book had its flaws, but I absolutely loved it, and hoped that like most new writers, the problems in their writing would improve with more experience. Unfortunately, I felt like the tiny tears in the first book have become huge, gaping holes in the second.

At the very least, what this book lacks entirely in logic and realisticity, it makes up for in entertainment. I don't remember the last time I've been so irritated at a writer and yet still enjoyed listening so much at the same time. Throughout this entire audiobook, I have found myself hitting pause near every ten minutes to yell at the narrator about how just about every detail of this story makes no sense whatsoever.

I can't help but feel like the writer wanted so badly to create a modernized fantasy setting in which their own fantasies could be lived out, and so attempted to stitch together a plot which would support that end. However, the stitches are loose, and the entire thing falls apart when you bring a single slice of logic to the threads. The characters are all unrealistic and their behavior is inconsistent across the board. Yet, they are so fun! As a listener, you want so badly for them to just be more polished because they *almost* work.

I can be as utterly incensed at Mr. Ashowan as the rest of the characters, and still somehow can't stop listening. Part of that is likely because of how much potential this story has; it's maddening. There is SO MUCH here that could have truly been GREAT. The characters all have a wonderful foundation. The plot lines could have worked had they not been rushed through so hurriedly. It felt to me like the writer didn't want to do the hard work of writing the challenging bits, and so just decided to skip them in favor of making the whole story light and fun. Which could be it's own virtue, I suppose, were it not wholly unsatisfying.

I think what's most frustrating about this book is that it feels like the author *almost* truly made something magical. If they could have just made some of the pieces more realistic and believable, it would have made those moments where we cheer and cry feel less hollow (because there are those moments, and that is what makes the story endearing!) Yet it never seems like we *earn* any of the rewards that this writer actually does a pretty wonderful job of writing. Solutions are not worked for, they are bumbled into and they fall in the lead character's lap like a set of deus ex machina dominos all throughout the book.

To put it in terms Finley might relate to: it's like the story is 10% hearty meal and 90% dessert. One needs plenty savory and substantial food to digest first in order to fully appreciate and savor the sweet and decadent. The writer might think we can live off of dessert alone, but eventually it will make us all diabetic.

In spite of my irritation, I'm giving this book higher marks simply because of the things I enjoyed in it and also (yes) because of what I *wanted* it to be. The potential is here! The writer just needs to take their time and really think things through logically and make the characters actually WORK for the payoff in the future. Also, I know it is a series meant to hook you into reading the next, but I'd like to see the next book's ending not fall so flat as this one did. The first book at least had a semblance of temporary resolution, whereas this one ended squarely in the midst of events with almost nothing tied up at all. The last 25 minutes of the book felt like they should have been the start of the next one, and treated with much more care.

The characters are witty and the situations get absolutely ridiculous and you're pulled in by the relationship and fear, and simple daily life of the characters. Finn is annoying yet sweet, his mother and her new beau , not to mention the deadly but beautiful Annika!

Made it through 3-4 hours trying desperately to get over my frustration at the protagonist and anything involving antagonists feels like they never get the payback they deserve. I wish this had maintained the promise of the first book.

I laughed, cried, and smiled.

I loved this book just as much as the first. The narrator is extremely talented and gave just the right tone to all the characters. The story was built well, dragging me in and making me hungry (no pun intended) for more. This is a book I’ll buy a copy of and read over and over again. It’s that good.

One of the few preordered audios. I was hooked from book one and book 2 was even better! Good narration and great characters. Looking forward to the next installment!!!!

This is such a well written and narrated series. I am really excited for the next one. I had to pause it in the middle of the work day to keep from crying or else my coworkers would be worried.

I laughed I cried I enjoyed

Like the title says I laughed and cried and throughly enjoyed this book and have preordered the next!

Fin definitely has more lives than his cat, and creates more uneasiness for all others.

for a book that frames itself as so progressive, there sure is some staggering transphobia, ableism, white savior antics

As for the reading, why do characters turn black when they are aggressive?