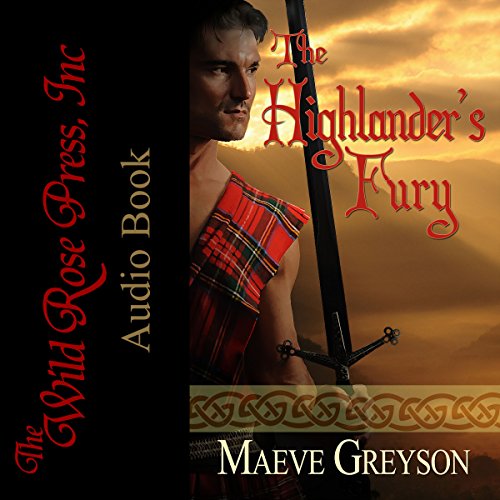 By: Maeve Greyson
Narrated by: Rebecca McKernan
Try for £0.00

Ciara, Immortal Fury, spends her days locating evil and administering justice. When her goddess mothers inform her they need a gifted child, Ciara agrees to their plan. She will swap places with Faolan MacKay's shy bride long enough to conceive, bear, and train a child in the old ways, before resuming her duties as avenger of wickedness.

Laird Faolan MacKay's advisers are pushing him to wed. Faolan has lost everyone he's ever loved and would rather travel to hell than down the aisle. To silence his advisers, Faolan chooses a woman rumored to be meek and easy to ignore. One problem: Nobody ignores Ciara. Against his will, he's enthralled with his new wife - to Ciara's surprise, the mortal affliction called love burns hotter than her hunger for vengeance. But when their time is up and Ciara must leave, can the bond of love overcome the edict of the ultimate powers?

This is a new release of a previously published edition.

What listeners say about The Highlander's Fury

What would you give up for love? I enjoyed listening to this story as I found out what Ciara and Faolan were willing to do. Secrets make this a good read as these two learn about faith and love. The characters are strong, yet accepting of change. The narrator, Rebecca McKernan, made the story come alive and entertaining. I recommend the story.

I received a copy of this audiobook as a gift, and this is my unsolicited review.

Faolan MacKay has turned away from magic and love, vowing to never love anyone again the pain of their loss is too great. After his parents died he declared that he would never love again nor would he use his mystical gifts. His advisors keep harassing him to marry dragging prospects from across the Highlands. He settle on a Sinclair lass, one who is “touched” and totally innocent and would be the perfect wife for him. Ciara, on the other hand is an immortal whose been sent to seduce a brooding mortal and bear the man a gifted child and after seven years disappear from their lives. Therein lies the problem, Faolan doesn’t want to be seduced and have a wife, especially the seductress he envisions Ciara to be. Nobody ignores Ciara and against his better judgment, he’s becomes enthralled with the woman. This is a story is enchanting to see these two strong and powerful personalities interact with each other, we watch as their love blooms in this story filled with mystery and romance, but is it a love to last a lifetime? This is my honest opinions after I voluntarily read a copy of this book that was provided to me with no requirements for a review.