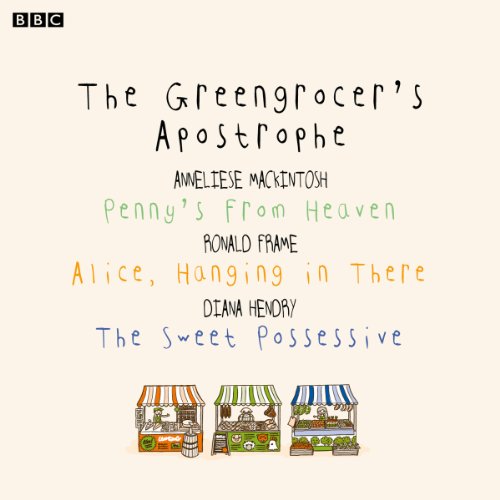 By: Eilidh McCreadie
Narrated by: James Anthony Pearson
Try for £0.00

A collection of three comic tales from BBC Radio 4.

‘The Greengrocer’s Apostrophe’ was inspired by those hand-written signs offering ‘Apple's and Banana's’, which can be found in every town in Britain. Originally broadcast in the Afternoon Reading slots from 28-30 September 2010.

‘Penny's from Heaven’, by Anneliese Mackintosh: James Anthony Pearson reads a quirky story about the apostrophe that ends a relationship. Produced by Eilidh McCreadie.

‘Alice, Hanging in There’, by Ronald Frame: When Alice's high-flying career stalls, she finds a novel way to occupy her time. Armed only with a balaclava and a pot of paint, she starts to vent her anger on sloppy punctuation. Read by Tracy Wiles. Produced by Eilidh McCreadie.

‘The Sweet Possessive´, by Diana Hendry: Distracted by an apostrophe obsession, a woman fails to notice that her lover is not all that he seems. Read by Monica Gibb. Produced by Eilidh McCreadie.

What listeners say about The Greengrocer's Apostrophe: Penny's from Heaven, Alice, Hanging in There, The Sweet Possessive (BBC Radio 4: Afternoon Reading)