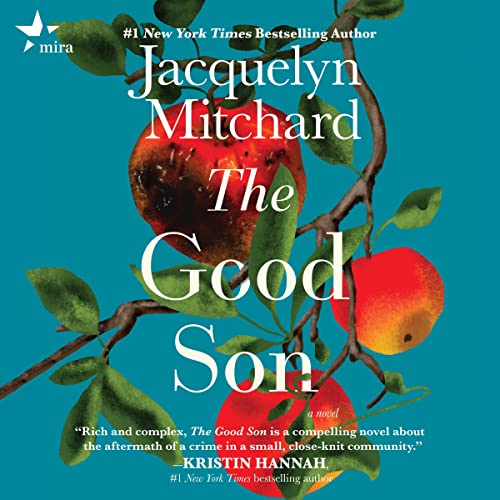 By: Jacquelyn Mitchard
Narrated by: Vivienne Leheny
Try for £0.00

“Rich and complex, The Good Son is a compelling novel about the aftermath of a crime in a small, close-knit community.” (Kristin Hannah, New York Times best-selling author)

From number one New York Times best-selling author Jacquelyn Mitchard comes the gripping, emotionally charged novel of a mother who must help her son after he is convicted of a devastating crime.

What do you do when the person you love best becomes unrecognizable to you? For Thea Demetriou, the answer is both simple and agonizing: You keep loving him somehow.

Stefan was just 17 when he went to prison for the drug-fueled murder of his girlfriend, Belinda. Three years later, he’s released to a world that refuses to let him move on. Belinda’s mother, once Thea’s good friend, galvanizes the community to rally against him to protest in her daughter’s memory. The media paints Stefan as a symbol of white privilege and indifferent justice. Neighbors, employers, even some members of Thea's own family turn away.

Meanwhile, Thea struggles to understand her son. At times, he is still the sweet boy he has always been; at others, he is a young man tormented by guilt and almost broken by his time in prison. But as his efforts to make amends meet escalating resistance and threats, Thea suspects more forces are at play than just community outrage. And if there is so much she never knew about her own son, what other secrets has she yet to uncover—especially about the night Belinda died?

What listeners say about The Good Son

I enjoyed the plot twist of understanding the ramifications of a crime on the perpetrator and his family more so than on the victim and the victim’s family although that was also depicted well. All of the narrator’s personas were so well spoken; the son’s soft voice assisted in showing him as a sympathetic character trying to make something of his life after his release from prison. His mother is a particularly fierce protector and supporter. The last quarter of the book veered into the thriller genre a bit too much but that is just my opinion since I don’t generally gravitate to thrillers. But overall this was such an excellent story that was quite beautifully written.

I'd like to start by saying this narrator? Oh... OH we love her. A great book can be ruined by a bad narrator. Vivienne Leheny? Great narrator. Already got another book read by her in the library.

Now onto the book. The idea of hearing what happens to the family and people surrounding the not victim made me intrigued. I enjoy hearing all sides of things. This was right up my alley. It gripped me from the beginning, and I couldn't put it down. However, it ended up being a "I've come this far. I have to finish it to see what happens" book. The twists and turns were very easy to figure out. I had the ending figured out, just the wrong person. By the end of it, I had said, out loud, "omg you're such an idiot. You're the dumbest person alive" or some reiteration of that statement FOUR times at least. Particularly in the scene where the narrator is talking to the cop when the narrator incredulously says "(Name) is the person in the hoodie!" and the cop said "Yeah I had a feeling it was" and the narrator says "WHAT?! HOW?!?" and I said, out loud, "Because the space between his ears has functioning brain matter and he's been paying attention for 5 seconds!" ...so there's that.

Some parts of this book were droned on about for far too long and others that NEEDED to be droned on about were quickly dealt with. I don't know if that's an editing or writing issue, but this being the first Mitchard book I've read, I am skeptical to read another. And that makes me sad. I love being an author collector. This idea was great. The suspense/thrill was ruined by overwriting and things being obvious. If these obvious things ended up being a distraction and the twist was mind blowing? 20/10 for this book. Alas, they were not. Maybe I'm too used to Jodi Picoult twists. I dunno.

Also, the life after prison for Stefan, no matter how short of a sentence it was, was laden in privilege. Anyone who knows someone with as much money as his aunt would do well, I suppose, but other than the "standard" ostracized life of a newly free prisoner/felon, SO much good happened to him because of privilege. Started to lose me when the FRESH out of jail felon was getting business left and right when everyone was supposed to hate him? Real world says that is a lie. Don't get me wrong, though. Being successful after prison is obviously great, but he just... fell into it with almost no push back from the small town community. Real world says...that is also a lie.

Anyway... if this book goes on sale or you can get it for free in a 2 for 1 sale, I suggest it. I don't regret using a credit on it but I wouldn't have someone else do it.

I have enjoyed other Jacquelyn Mitchard novels, but this one was excruciating to get through. It was more like a documentary than a novel and just didn't ring true for me.

Don’t waste your money. It’s not a thriller just annoying. The book goes off track, main character is gullible and can’t be that stupid. Not interested in this author or the writing style.

I really enjoyed this book. The performance was good. The story was good. Been thinking about this book even when I wasn't listening to it.

Powerful fiction, at its best

Great story. Didn’t see that ending coming! If you appreciate books that help you get into somebody else’s shoes, this is it. I loved it.

Well written and very thoughtful. Another subject thoroughly analyzed and presented by the excellent author.

If this had been a movie I would have fast forwarded some parts. I felt there was a lot of extra shared that almost bored me, but was glad to hang in through the end. By the time it got to the end I was like I thought so. I really wanted the boys mom to give the other mom a good exchange of words or smack at least. I get forgiveness but I’m not sure this is the route of choice.

Thea’s son is released from prison, having served time for killing his girlfriend in a drug-induced rage for which he has no memory yet takes responsibility. THE GOOD SON is a tale of a family trying to rebuild their lives.

Told through Thea’s eyes she wants her life back and also wants her son’s crime to be erased. At times THE GOOD SON moves slowly and my attention started drifting from the audiobook.

The resolution of THE GOOD SON, the weakest part of the story was a huge letdown and made little sense.

I don’t think I would have enjoyed reading THE GOOD SON, but as an audiobook it’s enjoyable.