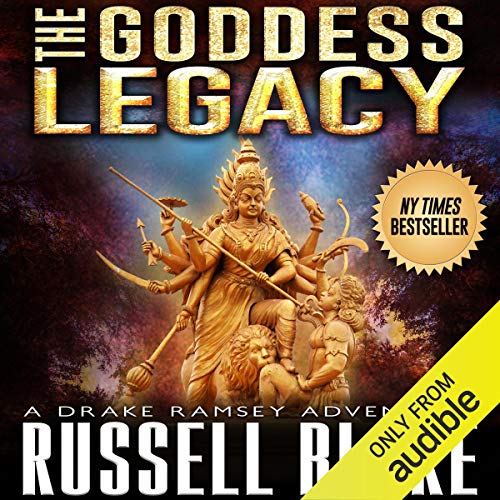 By: Russell Blake
Narrated by: Ray Porter
Try for £0.00

When Drake Ramsey gets an invitation he can't refuse to embark on a treasure hunt in India, little does he know that it will be a headlong rush into danger that will require all his wits to survive.

A breakout novel in the tradition of Raise the Titanic and Raiders of the Lost Ark. Adventure listeners are sure to enjoy the third volume in the adventures of Drake Ramsey, written by a NY Times and USA Today best seller.

What listeners say about The Goddess Legacy

I thoroughly enjoyed listening to the story and can't wait for the next one. A good narrator too. I would recommend.

Can't get over the plagiarism...

I'm a fan of this series, and Ray Porter is one of my favorite narrators. Unfortunately, this time the story was a big departure from the previous books. The story just Doesn't flow well and I couldn't get past the fact that these people seemed to struggle with very basic tasks. There is a scene where they are trying to read sandscrit letters and are actually in an Internet cafe yet they can't seem to figure out how to translate them. 3 grown educated adults have to be told to "Google it" by the waitress. Really???

The real problem is that this book is a poor rewrite of Indiana Jones and the Temple of Doom . 3 main characters (a treasure hunter, a beautiful woman and a military man) on the run from police and a cult leader in India. Trying to uncover a hidden relic and treasure only to stumble into a hidden temple and I kid you not an underground mine with generations of slaves and Chali/ Sheba cult worshippers. One character is even named Indiana Singh. I was just waiting for them to pick up an Indian street kid named "short round". I just couldn't get over how much this matched the movie. They say imitation is the sincerest form of flattery, but not in this case.

The series has shifted back to it’s treasure-hunting roots and it’s a relief to have the political/intrigue content of the 2nd book gone. Instead, this book has an entirely different problem – the story and setting instantly bring to mind Indiana Jones and the Temple of Doom, so much so that I’ve seen accusations of plagiarism. It’s a bizarre choice for the author to make, why not use another story that won’t immediately remind readers of an incredibly popular movie series whose imagery is the first you picture when you hear about Kali worshippers with mines and slaves? So there’s an entire storyline here that feels completely unoriginal, and the only thing that saves it is the modern setting. Of all the stories the author could have told, why such a cliché one?

Drake and Ally are a mess as characters. I already noticed it in book 2, but Drake seems to be becoming more and more immature with each book. He’s gone from a character I liked, to one that vaguely annoys me. He reminds me more and more of a stereotypical surfer dude instead of an intelligent, methodical treasure hunter. His ‘ability’ to connect information that was cool in the first book, disappeared in book 2, never to be mentioned again. His constant and rather pathetic attempts to romance Ally are getting annoying at this point. There’s zero chemistry between them so I have no interest whatsoever in their relationship: the whole relationship ends up feeling like a required element for the genre, and not something the author thought was important.

I was already troubled by Ally in book 2 but here she has deteriorated to a meaningless filler character with no personality other than obnoxious naivete. Her being an archaeologist is just a word now, it means nothing at all since she never uses any of her so-called knowledge, and her almost complete ignorance of the subject matter means it would have been better just to have her just as Drake’s girlfriend, rather than set her up in the laughable position of being their ‘expert’. She had such potential in the first book - sassy, smart and charming - but the author has done nothing with her, and the interesting girl I cared about is completely gone. Now she’s just there as Drake’s love interest, and even that is so insipid you wonder why the author even bothered.

Spencer is the only character who has completely remained intact and consistent and is a constant relief from Drake and Ally. There was so much potential in the first two books for Drake and Spencer to become real partners: Drake’s intelligence with Spencer’s military training and instincts, but it has never really come to fruition.

The reader makes this book worth listening to – he’s been a constant delight through all three books and his astonishing variety of believable and immersive accents really makes up for the shortcomings in the book.

This series started out so strong but the author has made some strange choices – book 2 was an entire genre shift into a political thriller with almost no treasure hunting, and book 3 has a large chunk of the story which is so uncomfortably familiar that it’s off-putting. I’m getting the distinct feeling the author doesn’t know what type of genre he wants to write, so is fumbling around trying to figure it out. I did mostly enjoy it but the experience is soured. It’s a disappointment when I loved the first book so much – I would have loved more of that, but unfortunately, the second and third books have been completely out of step. I would definitely read more in the series but the author needs to figure out what story he’s trying to tell, because right now, it’s coming across as confused and he’s losing control of his characters – the book feels lazy, from the cliché storyline to the bland, almost unrecognisable characters, the author needs to sort his vision out. I don’t want to do such a negative review but this book has serious issues and I’m very disappointed by that, the first book was great and I wanted more just like that. The second book was also excellent, if a weirdly different genre, so this book is a disappointment.

Let me be clear – I didn’t dislike it and would read more of the series without hesitation, there’s a lot of great stuff in here and the author creates some exciting sequences, but it definitely needs work if it’s to get back on track.

I noticed several negative reveiws of this book and therefore was tempted not to get it. However, I so much enjoyed the first two books in the series I thought it was worth a chance. Glad I did! Fascinating story. Certainly not plagiarism...in fact refreshingly original. The references to Indiana Jones are tonque in cheek; and the author makes this clear. This is a book about treasure hunters, but not the old-fashioned kind of treasure hunters. The author is a great writer. The story moved along fast, never boring. The main characters are not your standard action heroes and that even makes it more interesting. I am ready and waiting for the next volume in the series!

Drake Ramsey and company go after another treasure

This is the third in the Drake Ramsey series and takes place only days after the conclusion of the second novel.

Treasure hunting is a tough business. But this novel is less about treasure hunting and more about avoiding getting arrested in the (mostly) slums of India. The crew is in Delhi India for most of the book and avoiding the authorities because Spenser is suspected of murder. Throw in shady government operatives, lots of sketchy locals, and the usual -what the heck is going on here - attitude by the main characters, and you get an idea of the book.

There is conspicuously less actual treasure hunting and more sneaking around than typical in this series, and personally, I think the story suffers a bit for it.

The book is the third in a trilogy (so far anyway). Not sure if that is meant as an end point or not, but there is ample space for another chapter to the team's story. I personally found this to be the least of the three novels, but still a decent listen. If there is another volume added, I believe I will be getting that to see where things proceed.

Not sure when the three main characters became annoying morons, but that kind of happened on this book. Porter did a great job, but the story here was pretty bad. Save your credit

Not as good as the first two.

This book was OK, but not nearly as good as the first two. I would definitely read or listen to the first book in the series again, but would have no interest in listening to this one again.

Russell Blake is a great stroy teller and Ray Porter makes his stories literally come alive. It is a true delight listening to a book narrated by him. His ability to immitate every single accent so precisely is remarkable. He is by far the best performer I've encountered on Audible.

Top of my head, Ray Porter is an Audible god, no one is better (see his Marlow in the Chandler series). And this has been a very entertaining action-packed adventure series. Here our intrepid heroes seek treasure in the ugly bowels of India and a lark turns into a dangerous pursuit of long-hidden secrets. Enjoyed it a lot.

Don't waste your money on this series.

I've never submitted a review but this book pushed me to it. First book in the series had promise, second one wasn't great and the last book was a total waste of time. Kept hoping it would get better right down to the last chapter, it didn't.

A great story and story teller, my only wish is to have many more stories to be able to binge listen to these adventures by this writer and this story teller.