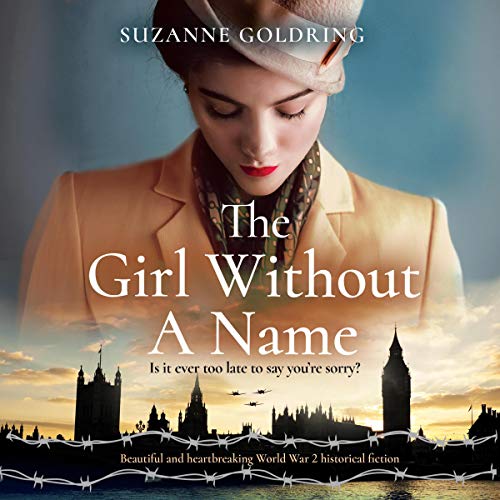 The Girl Without a Name

By: Suzanne Goldring
Narrated by: Lucia Young,Diana Croft
Try for £0.00

A secret wartime love affair. A girl nobody can find. Is it ever too late to say you’re sorry?

September 1940. As the bombs of the Blitz fall on London, Ruby and Stevie are falling in love. United by a shocking experience when they were evacuees, Ruby believes that she understands Stevie like nobody else can. But then Stevie is sent abroad into danger, and as Ruby waits desperately for letters with foreign stamps that never come, she begins to fear that he is lost forever. And when Stevie does return, he has changed, and Ruby faces a difficult choice.

August 2004. Billie has rushed to her father Dick’s hospital bedside. A terrible stroke has robbed him of his speech, and he is a shell of the man he was before. But when Billie finds a crumpled black-and-white photo in his wallet of a smiling, dark-haired girl she doesn’t recognize, Dick frantically tries to talk. Billie knows that he is trying to tell her something important, and she must ask the questions her father cannot. All she has to go on is the name he is just able to mumble: Ruby.

As Billie uncovers Ruby’s tragic story, she is determined to find out what happened to the girl who went away for a weekend with the man she loved and never came home. Why did nobody miss her? And how is she connected to Billie’s beloved father? Can Billie lay the ghosts of the past to rest, even if it means revealing the darkest secrets of her father’s life and breaking her own heart?

A story of the bravery and courage of a young woman in wartime and another woman’s quest to put things right. Fans of The Letter and The Nightingale will be hooked on The Girl Without a Name.

What listeners say about The Girl Without a Name

Totally absorbing and for me so compelling as we are local to Lynmouth, living at Minehead. We were obviously very aware of the Lynmouth flood disaster but this novel made it so much more personal for me.

Very well done. Excellent change in voices and characters. Able to clearly follow the stories with its changes in time. A love story! Then the twist !!