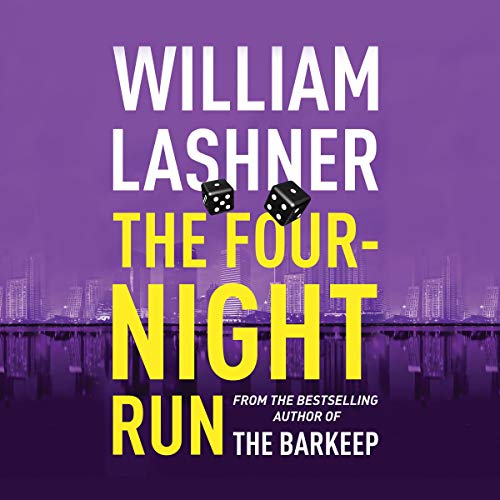 By: William Lashner
Narrated by: Peter Berkrot
Try for £0.00

J.D. Scrbacek has just won the biggest trial of his career, but even as he crows to the press, his entire life blows sky-high. Was the bomb meant for him, or for his mobster client? In this seaside casino town where the tables run hot and the tensions run high, the odds say the attorney is a marked man.

Alone and on the run, Scrbacek flees into the city's forgotten underbelly, a ruined corridor called Crapstown, where he is forced to confront the ghosts of his past, his present, and his future. Somewhere in the sordid stream of his own existence lie the answers he needs. But in order to emerge from the depths of Crapstown, Scrbacek must argue for his life before a jury of the forgotten and the damned. Is he lawyer enough to save his own skin?

From the bestselling author of The Barkeep comes a raucous tale of reckoning, racketeering, and revenge.

What listeners say about The Four-Night Run

William Lashner is much better than this!

Welcome to Crapstown. That's the poor section of the casino town to which three nipple lawyer J.D. Scrbacek escapes to escape the threats to his life. This novel may be intended as humor; if so it's not funny. Maybe it's supposed to be suspense; if so, I missed the suspense. The Four Night Run is not for me. I got about 4 hours into the book and gave up. This may be the worst audiobook I have ever tried to listen to. The narrator is very good with different voices.

I just can’t listen to the rest of this book. Which is a shame because I really loved the last two books I read by this author. The storyline is not what I thought it would be according to what was written about the book and the narrators voice is just irritating to my ear. What a waste of money.

A major disappointment for Lashner fans

Unlike Victor, the main character in this novel is the sleaziest of lawyers with no redeeming qualities. As he runs for his life from real and imagined attackers into the mean streets of Crapstown, I found myself wishing someone would hurry up and kill him so I could be rid of this boring novel and get on to the next one. I'm still a Lashner fan so I guess every writer has a right to produce a stinker occasionally. Even Stephen King had his "Rose Madder."