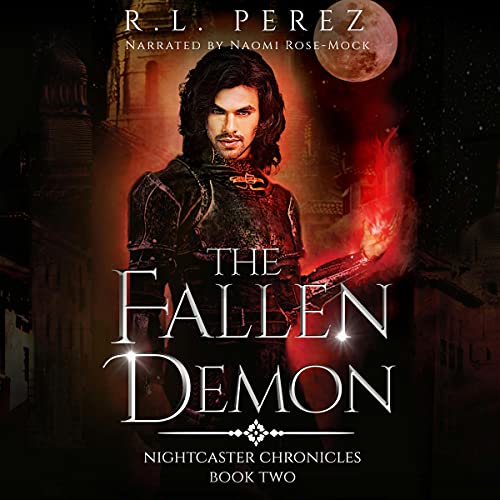 Leo Serrano, shape-shifting vampire and coven leader, knows something dark is approaching his city. To uncover the threat, he works alongside Brielle, a frustratingly stubborn witch who plays by her own rules. As his feelings for Brielle burn hotter, Leo discovers Brielle holds a fiery new power that threatens to consume them both.

A pack of werewolves arrives, intent on taking down the coven. But as Leo digs deeper, he finds a darker presence is pulling the strings. And he becomes the target of Lilith, queen of the Underworld.

War breaks out. Lives are at stake. And Leo will do anything to protect his coven.

Even if it means paying the ultimate price.

This audiobook contains strong sexual content and ends on a cliff-hanger.

What listeners say about The Fallen Demon

Book 2 in The Night Caster Chronicles continues Brielle’s story, Lilith has disappeared following the battle, but nobody is fooled into thinking she has been banished for good. Brielle’s phoenix seems to have gone dormant again, and Brielle and her family live along side Leo’s coven in the village. Though it is not easy and certainly not helped by the growing feelings they both deny and try to fight.
Soon enough trouble turns up in form of a werewolf called Benny and his pack and Lillith makes her presence felt again.

True to form R.L. Perez weaves an action packed tale of romance and betrayal, and fierce foes engaging in magical and physical battles.

I am pleased to find that Naomi Rose-Mock, from the first Time Caster novel, narrates the second book in the series, keeping it consistent and again she very successfully gives the characters from various countries the inflections or accents from their native language.

I received this book in audio book format free from the author and am leaving this review of my own volition.

Brielle isn’t sure who to trust anymore as Lilith seems to be taking over so many people. Her involvement with Leo seems to be getting off the ground now they’ve both accepted their feelings.

Who to trust, and secret deals made.

Holy smoke, that was absolutely fantastic. The intense storyline had me holding my breath more times than I could count, Leo is an incredible character. I loved him pretty much from the first book, his personality is complex and sometimes a little possessive. He holds loyalty above just about everything, becoming dangerous if you break his trust. He leads his coven with a firm, but fair hand. Brielle is strong even though she is barely an adult, not yet 18. She's rash and jumps into things without any real plan most of the time, but she's also determined and stubborn which sometimes her mouth lands her in trouble. My favourite thing about this book, is the switching between both Leo and Brielle's perspectives. It gives you a really good look at each character's thoughts and feelings, giving the story a much deeper emotional connection. The book was so fascinating I simply couldn't put it down, the narration is done really well. I love her accent when portraying Leo, then upping her pitch slightly for Brielle. This series is a 3 book trilogy, and this is the second book. It's also the very first series I bought on kindle which drew me to the author, I love R.L. Perez's writing. It's filled with magic, amazing and descriptive fight scenes, and whirlwind romances that never run smoothly. The intensity and emotion in her books practically floor you, I highly recommend reading any of her books they will blow your mind.

Book 2 continues this fast paced series. It is told by 2 POV's which brings an extra dimension to the story. I like that in this installment we get to know other characters better. The narrator is fantastic at bringing the story and character to life. I look forward to more in the series and by this author.

Oh my! This book was magnificent. I am in love with Leo and Brielle. They have this amazing chemistry and personalities that blend together so well. I love their banter and at times their fights. This book in the series is jammed packed full with action, drama, suspense, and mystery. It pulled me in and didn’t let go. It had me on the edge of my seat with anticipation and wonder. I love that we get to see more of Desi and Oliver this book. They added so much more depth to the story. This is one stunning story that does not disappoint. It will draw you in and have you so engaged in the story. Yes, it does end in a cliffhanger and I can’t wait to see what happens next. Naomi Rose-Mock was excellent. The narrative was engaging with clear and precise speaking. I love how well it was narrated. This is an absolute must read and listen to.

another excellent addition it definitely holds your attention throughout and draws you into wanting the next book as the way the ending was. I would recommend listening to.

I actually couldn't wait for the third audiobook I had to finish the series it was really good the author's imagination along with the narration just takes you to the story and brings you through it. you actually feel like you're there experiencing everything that the characters are experiencing. I also suggest the blood caster series

Narrator does a really good job. She fits the characters well; she does a good job on the male voice as well! Quality performance.

Entertaining characters and action! Enjoy the witch and vampire magic aspects! Witch Brielle and Vampire Leo must team up to defeat Lilith before she takes over and kills many. Unfortunately, the team work isn’t reaching the level it needs to, so there’s problems all over. There’s also a bit of a connection between Leo and Brielle, but both are trying to deny it. I still really hate that Leo sleeps with his donor; especially since it’s not necessary for him to feed, but I do think Leo and Brielle have a sweet connection. I think there needed to be more time showing them growing together, but they’re cute. I wasn’t a fan of the characters so easily giving into/falling for whatever the bad guys want; some of the choices made by Brielle and especially Leo were just the worst, but I do appreciate Brielle’s tenacity. Looking forward to reading how these characters end up; this one has a major cliffhanger. Overall, an entertaining read with an interesting premise!

This trilogy has caught me hook, line, and sinker. I have totally become invested in the characters of Leo and Brielle. Leo is especially my favorite as he’s a coven leader that is both fair and dangerous. The romantic tug of war between Leo and Brielle is quite amusing since even though Brielle is 18, her clueless romantic thought process seems to be closer to a 14 year old. This being book two of the series, this book delves into more of the dangerous threat that has been building. I absolutely can’t wait to listen to the concluding book three of this series as the cliffhanger ending of this book is very intriguing. R.L. Perez, is an excellent author, and I highly recommend her books. The narrator for this story was very good, and I thoroughly enjoyed listening to her bring this book to life. I received a free review copy of this book from the author and am voluntarily leaving review.