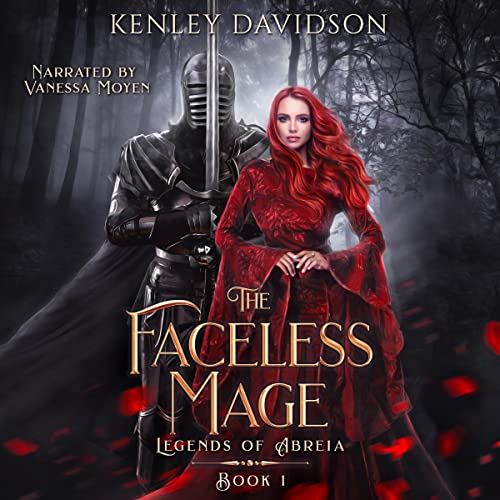 By: Kenley Davidson
Narrated by: Vanessa Moyen
Try for £0.00

He’ll protect her with his last breath....
Until she becomes his next target.

Leisa’s ambitions used to be simple. Guard the princess. Hide her magic. Wait for her family to return.

But all of that changes when her king demands that she use her unique abilities to spy on the rival kingdom of Garimore.

Alone, far from home, and living a lie that grows more perilous by the day, Leisa’s task is complicated by her most dangerous enemy yet—the masked assassin known only as the Raven.

Everyone in the Five Thrones knows to fear him, but the Raven is not what Leisa expected. As silent as he is lethal, he provokes her curiosity as much as her fear, and hides secrets she’s determined to learn.

When her already precarious mission takes a deadly turn, Leisa must evade the Raven himself if she is to succeed. It’s never been done before, but Leisa is nothing if not stubborn. And if she doesn’t become the first to escape his blade, her entire kingdom will pay the price—in blood.

If you love adventure, mystery, and slow-burn enemies-to-lovers romance, discover the Legends of Abreia, a new romantic fantasy series for fans of Elise Kova, Sylvia Mercedes, and Shari L. Tapscott!

What listeners say about The Faceless Mage

Faceless dangers, but who's the real enemy.

Wow... what an incredible story, everything felt almost climactic. With every single chapter I felt more pulled into the book, the mystery and intrigue as strange as it sounds, is mouth-watering. Many of the descriptions of some characters, were definitely drool worthy. Of course the faceless bodyguard is the most delicious character in my opinion, I'm rather jealous of Leisa. So much scheming and back biting, it was like been subjected to a pack of vultures. Yet Leisa seemed to handle herself unexpectedly well, possibility surprising even herself. I loved how she could appear fragile and skittish one minute, then strong and fiery the next. She's such a fantastic main character, and there were many other characters i loved too. The betrothed Prince I actually like, he's an unknown throughout book 1. I honestly can't wait to find out more about him, he's such a flippant character. This is definitely going to be a noteworthy series, and extremely enjoyable.

I love Kenley Davidson's stories. This series has me gripped in a full-bodied world with wonderful characters. I read this book in one day while I was on set. I couldn't put it down. (Boy, did I get a stiff neck! LOL) Really looking forward to all coming books. I will be buying everything written by Kenley.

Vanessa's style is compelling and dramatic, but it is too fast. It doesn't allow the listener to digest what has just happened or been said. Plus her pronunciation of some words is really weird and inconsistent. Her dialects take some time to 'settle' and they are not internally consistent, either. Yes, this is another world with its own dialects, but her version of UK dialects is dreadful and makes me cringe. I wish Kenley had been able to stick with her previous narrator.

The sample made me concerned that the narrator might be a bit monotone, but I found it easy to distinguish voices. If anything, she hit some of the consonants pretty hard, but I adjusted to that pretty quickly. I did find her reading level too fast for my comfort. At 90% it was just right.

The story itself is original in design. While the MCs ability to talk to each other takes a while to develop, we get dual POV, so we still know what everyone is thinking. Leisa is an intelligent and honorable character who takes necessary risks without being foolish. The Raven is trapped in armor that enslaves him to a Very Bad King. Leisa attempts to save her kingdom, and, if possible, free The Raven from his compulsion spell.

It is the first book in a series I binge read when I first found it on Kindle.

Love this book! It was so emotionally charged.

Leisa and Keiren's story is emotional and deep! I was definitely drawn into their world and rooting for their happy ending. They will have to wait a bit for that, but the book left you in a good place. The narrator was engaging and emotive. I can't wait to listen to the next one.