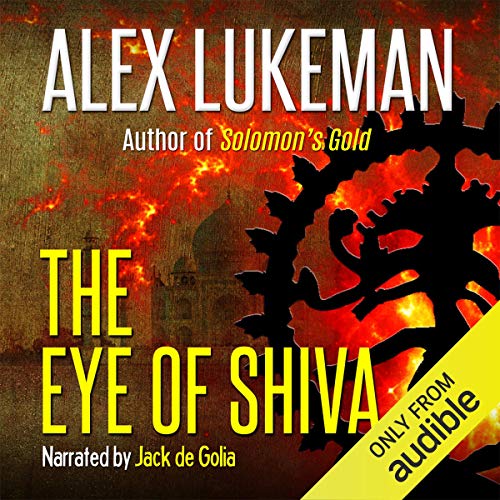 The Eye of Shiva

On a mission to the Philippines Nick Carter of the Project finds ancient gold coins in a terrorist stronghold. The terrorists have been using the gold to buy weapons. Where did the coins come from? The discovery sets the Project team on a collision course with a ruthless terrorist who dreams of an Islamic Caliphate in India and a dying spy from India's CIA seeking revenge for the murder of his wife and son. All the while, a secret global conspiracy is manipulating events from behind the scenes. The conspirators want to provoke war between Pakistan and India and launch a nuclear missile at China.

Clues hint that the gold coins are part of a legendary treasure looted from India in the 18th century by a Persian King. Among the stolen artifacts is a mystical jewel known as the Eye of Shiva. One man is obsessed with finding it and fulfilling a prophecy predicting the destruction of India's enemies.

Nick and his lover Selena struggle with their doubts about each other even as they risk their lives against murderous enemies. As the war drums grow louder and tensions rise on the sub-continent, Nick and Selena are caught in a race against time to stop a nuclear war that will devastate China, Pakistan and India.

The Eye of Shiva is a fast moving story of love, revenge and intrigue, guaranteed to keep you turning pages.

What listeners say about The Eye of Shiva

There are terrorists, politics, and regions groups, that make up this plot, of adventure.when gold coins are found and what it will buy. Was this also part of the treasure from India and the Eye of Shiva .Good story with adventure. Given audio for my voluntary review and my honest opinion

This author never disappoints. From the first page to the last there is non-stop action! Every time you think you can take a breath, you are blindsided by something unexpected! When I think of action, this is the first author who comes to mind. Hello, Hollywood, here's your next blockbuster series!

I have recommended The Project Series to several friends, and The Eye of Shiva is no exception. Non-stop action from the first chapter!

The setting -- learning about Manilla, Pakistan and India, and of course, Jack's great capture of the characters, both the new and old alike

When the lost treasure was uncovered

Yes, and I almost got through it in one setting. I was sitting in the car in the garage, not wanting to come in the house until it was finished, but alas, I had an hour left to listen to.

Jack does such a fantastic job capturing the essence of the characters and bringing them to life. He is my favorite narrator, and I've listened to a lot of audible books.

The Eye of Shiva

This was another great adventure with Nick and Selena.Will they buy a ring?Will they save the world? Jack de Golia was a terrific narrator.I was given this free review copy audiobook at my request and have voluntarily left this review.

The book kept my interest while working out. Would recommend for others to listen to.

A relatively good story but the performance was really bad. Like listening to a dad reading a fairy story to a child.

What in the world WAS this?

Would you try another book from Alex Lukeman and/or Jack de Golia?

I guess I got into something that I did not understand. I get now that it is part of a series of chapters. Aside from that the writing was stilted and cliched, not a good listen. Add to that the narrator's attempts at different voices and it was one of my worst listens in awhile. I recommend neither the author nor the narrator.

Something by Harlan Coben

Would you be willing to try another one of Jack de Golia’s performances?

Doubtful, but with an author that I respect, perhaps.

I did appreciate the give and take between the two protagonists.

On a mission in the Philippines, Nick finds some odd gold coins and brings one back for Selena to look at, and with this Nick and the team are thrown in the sights of a terrorist group and a dying spy. The terrorist wants to start a war between Pakistan and India, and the spy wants to return the Eye of Shiva to the rightful owners. All the while Nick and Selena are still struggling with their relationship.

This is another wonderful project book by Alex Lukeman. This is a series I am enjoying a lot and do not want to end! Hear that Mr. Lukeman, please keep on writing. I love the characters, at least the good guys. The plots are strong and the scenes are not outrageous like some action books, also the facts are checked well.

I usually get the audiobooks and can not say enough about narrator Jack de Golia he is wonderful and he does the character voices so well, that you just get lost in the book like you are there and part of the team. it is awesome and I can't wait for the next one.