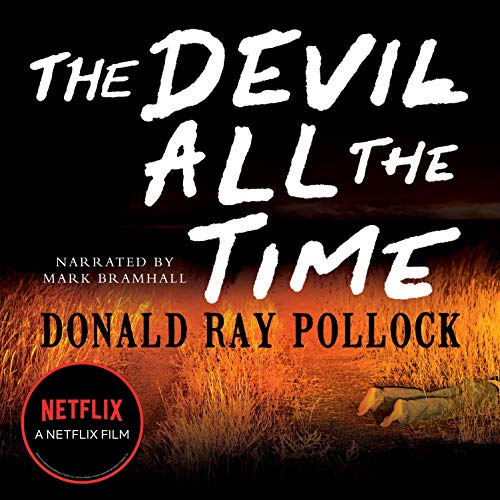 The Devil All the Time

By: Donald Ray Pollock
Narrated by: Mark Bramhall
Try for £0.00

Willard is a tormented veteran of the carnage in the South Pacific who can't save his beautiful wife, Charlotte, from a slow death by cancer no matter how much sacrificial blood he pours on his 'prayer log'.

The spider-handling preacher Roy and his crippled virtuoso-guitar-playing sidekick are running from the law. And caught in the middle of all this is Arvin, Willard and Charlotte's orphaned son, who grows up to be a good but also violent man in his own right.

A dark and riveting vision of America from the award-winning author of Knockemstiff.

"Donald Ray Pollock redefines the term 'American Gothic' in his debut novel, taking Flannery O'Connor and William Faulkner and turning them up to 11.... The Devil All the Time is a very dark slice of Americana." (The Herald)

"An extraordinarily brutal yet tender insight into the lives of his characters. Superb." (The Times)

"Like being dragged backwards through a briar patch by William Faulkner and Flannery O'Connor while Nick Cave howls hosannahs at a blood-black moon... Spider-gobbling revivalists, kick-back sheriffs, sideshow freaks, perfidious preachers - all are present and most incorrect....You can taste the metal in the water and the tang of decay in the fetid air." (Time Out)

What listeners say about The Devil All the Time

All roads lead to a sad depressing ending.

Seen through the lives of various people from the rural farmlands of Ohio, the devil is partly the quagmire of their circumstances and partly just the depravity of the human soul. The narrator does a great job with the rural mid western accent, giving each character a personality, pulling the listener into each of the stories. Made me want to read the book once again. Definitely not for the soft of hearts that believe in good things happening to good people!!!

This book isn’t a walk in the park and it’s not full of puppies and kittens either! It’s down right nasty. With a hotch potch of characters which aren’t that likeable to begin with including serial killers and child molesters it’s amazing that there’s anything which redeems this book but believe me there is!

A story which flows and kept me glued to my buds narrated masterfully ...oh how I wish I was starting this book for the first time... no spoilers from me.

Just spend a credit and discover it for yourself.

If the Coen Brothers did an episode of The Waltons

What a story. Great characters. This is a dark book. Probably the best narrator I have listened to. He really makes the characters come to life. Highly recommended.

Absolutely Brilliant All the Time!

I’ve not read any of Donald Ray Pollock’s books before and only grabbed this one because I like the look of the Netflix movie (which I’ll be amazed if it lives up to this!).

I’m not going to give you any spoilers: the book dips into the lives of a boy, a preacher and a photographer and follows them along their life’s journey. There’s very little to smile about, it’s grim at the best of times, horrific at the worst… but rest assured this is one that’s well worth reading. I can’t recommend it enough and will be hunting out more of Pollock’s work.

There's dark, and there's this. The book seemingly meanders through the grim lives of a cast of characters in the southern States, but in an atmospheric and fascinating fashion. Richly detailed and performed, 10/10

Disturbing characters in the best Ame
ricana. A great tale entertaining throughout with the darkest subjects entwined in an unforgiving and desperate world.

Unremittingly grim, I loved it

Great narration of a gothic, utterly macabre story. I could see all the places, faces and blood.....

Fantastic narrator who breathes life in every character and makes them feel alive. Immersive book and deeply sad story.

gripping, gritty and horrifying. a must listen

I came because of Netflix. But I stayed for the brilliant story and narration. 10 out of 10. dark and brooding southern gothic. If only there where more of his books recorded!

The best audiobook I have ever listened to

Mark Bramhall's voice fits the story and characters perfectly, he was born to narrate this book.