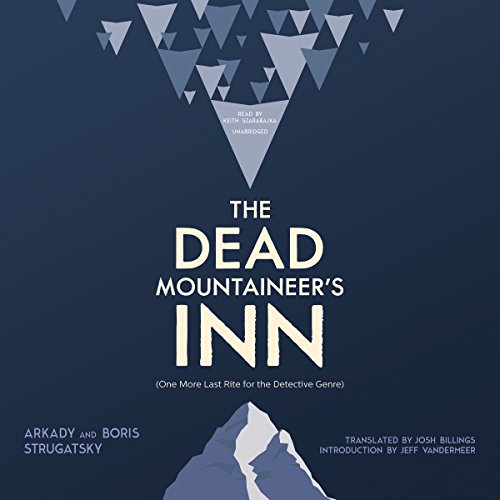 By: Arkady Strugatsky,Boris Strugatsky
Narrated by: Keith Szarabajka
Try for £0.00

From the Russian masters of sci-fi comes The Dead Mountaineer's Inn, a hilarious spoof on the classic country-house murder mystery.

When Inspector Peter Glebsky arrives at a remote ski chalet on vacation, the last thing he intends to do is get involved in any police work. He's there to ski, drink brandy, and loaf around in blissful solitude. But he hadn't counted on the other vacationers, an eccentric bunch, including a famous hypnotist, a physicist with a penchant for gymnastic feats, a sulky teenager of indeterminate gender, and the mysterious Mr. and Mrs. Moses. And as the chalet fills up, strange things start happening - things that seem to indicate the presence of another, unseen guest. Is there a ghost on the premises? A prankster? Something more sinister?

When an avalanche blocks the mountain pass and traps everyone in the chalet, the corpse is finally discovered. Glebsky's vacation is over, and he's embarked on the most unusual investigation he's ever been involved with. In fact the further he looks into it, the more Glebsky realizes that the victim may not even be human.

In this late novel from the legendary Russian sci-fi duo - here in its first-ever English translation - the Strugatskys gleefully upend the plot of many an Hercule Poirot mystery - and the result is much funnier and much stranger than anything Agatha Christie ever wrote.

What listeners say about The Dead Mountaineer's Inn

interesting and addictive. listened to it in a day. well worth a listen A±+++

the is a peculiar if not entertaining listen, with what seems a normal detective caper ending in anything but a normal date time caper.

Good, but poor in the end.

The ending of this novel was not exactly on parr with the rest of the book. As the mystery progresses you are takin in, making guesses of your own, wild interpretations of what the clues really meant, and then everything is wrong and just twisted and stupid. I won’t spoil anything of course but the ending does not make it not worth a read if you like Russian science fiction.

SKIP THE INTRODUCTION IF YOU’VE NEVER READ THIS BOOK

I’ve never read a Strugatsky brothers book before but I enjoyed The Dead Mountaineer’s Inn once I got an ear for the pacing and dialogue. The book is full of odd non-sequiturs, mostly in the dialogue, but I imagine most of those arise from cultural differences as well as from the difference between modern, Western writing and the writing style of mid 1900’s Russia. However, by the time I’d finished the book, the quaint, oddball characters had become old friends and I look forward to listening to the book again in the future.
My main complaint was the translator’s wholly unnecessary and (I felt) rather masturbatory introduction, which contained spoiler-filled overviews of the major characters and plot line. It would not have been out of place at the end of the book, but listening to it at the beginning almost caused me to return the book before I’d even made it to the story itself. Even having finished the book now, I feel as if my view of the characters is still tainted by the translator’s opinions of them. Save the introduction for the end if you wish to go into the story with a fresh, unsullied perspective.

I think that the introduction overplays the "abstract" nature of the story. It is strange, but doesn't dwell on its own strangeness very long. It's interesting how two Cold War Russian writers imagined aliens and detective novels.

Road side picnic was better. This one is odd and you should try it out.

Worth a read if you're into the genre. It gets better as it goes along and gets really weird by the end.

once again the Strugatsky's have amazed me with their incredible emersive story telling. A recommendation for any lover of literature.

Spoof of the murder mystery genre!

Russian brothers Arkady and Boris Strugatsky released this humor novel in 1970 and it was released in English 12 years later. It is actually quite funny as they imitate classic murder mystery novels quite well. Narration is outstanding.

What can I say

I find this really hard to review, I do not know if I really understood this book. It had a hypnotic quality so I finished it, I liked the setting and the feel of it. But am totally confused by the story.

Narrator made this more interesting than it was.

The story started out interesting, the climax was okay, but the relationships between two characters made the ending worthwhile. It's a hard thing to do, but the narrator made it entertaining.

I guess I don't really need aliens to spice up my mystery reads. Science fiction fans would probably get a kick out of this.

Murder on the Mountain

Very interesting in that it is well written but is hard to categorize. It’s sort of science fiction, but not really. It’s a detective story, but more than that. It is reminiscent of “Murder on the Orient Express” in that a police detective is trying to take a holiday and then gets stuck in a situation where there is a murder and it has to be one of a small group of disparate people. However, the detective is not a murder detective but a white-collar crime detective used to finding criminals by examining financial statements, etc. On arriving at the Dead Mountaineer’s Hotel, a secluded resort in an alpine valley only accessible by one road through the gap, he finds that some things seem strange. There’s a rich and eccentric old man and his beautiful wife, a famous illusionist and his niece, a physicist, an attorney, and a few others. Then, late at night, an avalanche blocks the one road and they are trapped. However, not only is there a murder to investigate, the policeman begins to realize that the guests are not what they seem to be. This book was written in Russian and translated into English and is also known as “Inspector Glebsky’s Puzzle.” It was also made into a video game. This was just fun to read.