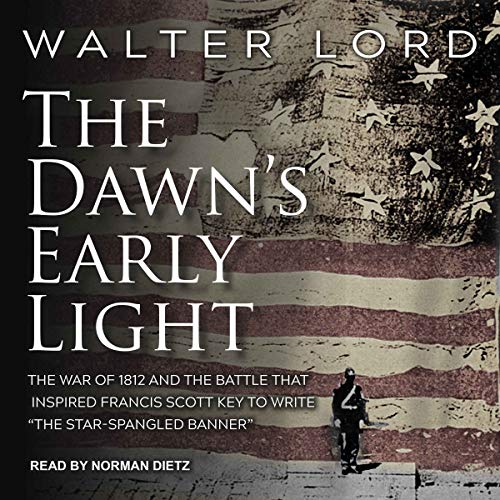 By: Walter Lord
Narrated by: Norman Dietz
Try for £0.00

It took more than a revolution to win true independence: The story of the War of 1812, the United State's second war on England, by a New York Times best-selling historian.

At the dawn of the 19th century, the great powers of Western Europe treated the United States like a disobedient child. Great Britain blocked American trade, seized its vessels, and impressed its sailors to serve in the Royal Navy. America's complaints were ignored, and the humiliation continued until James Madison, the country's fourth president, declared a second war on Great Britain.

British forces would descend on the young United States, shattering its armies and burning its capital, but America rallied, and survived the conflict with its sovereignty intact. With stunning detail on land and naval battles, the role Native Americans played in the hostilities, and the larger backdrop of the Napoleonic Wars, this is the story of the turning points of this strange conflict, which inspired Francis Scott Key to write "The Star-Spangled Banner" and led to the Era of Good Feelings that all but erased partisan politics in America for almost a decade. It was in 1812 that America found its identity and first assumed its place on the world stage.

"[Lord uses] a kind of literary pointillism, the arrangement of contrasting bits of fact and emotion in such a fashion that a vividly real impression of an event is conveyed to the reader." (New York Herald Tribune)

What listeners say about The Dawn's Early Light

Lord's narrative of the late stages of the War of 1812 shines a light on both British and American motives and actions as th conflict reached its climax. It paints a picture of conflicting ambitions that ultimately led to a new chapter in North American history as the US emerged as the undisputed master of the East, and soon the West central continent.

The person reading it was so dull. I tried but could not handle it. I have listened to over 300 books bit this tied for the worst performance next to all of Scott Bricks.

I really wanted to love this but it just didn’t happen. There was a lot of scholarly detail told in a non-riveting way.

The narration is tensions at regular speed, but I put it up to 1.3 and it sounds wonderful at that rate. Excellent story, very well written, with a perfect balance of event detail and time progression.

This was an interesting book, I never knew much about the war of 1812 but this seems to have enlightened me on this subject. It is slightly comical how the combatants are described as being so gentlemanly to one another, those days are gone!

Every American should know these stories. The bravery, the mistakes, the stratagems and the total luck, the chaos and the poetry. Appreciating the complexity of what transpired through Walter Lord’s “you were there” signature style brings an essential understanding of the potential variabilities in outcome and impact. Thank you for a great presentation of this material!