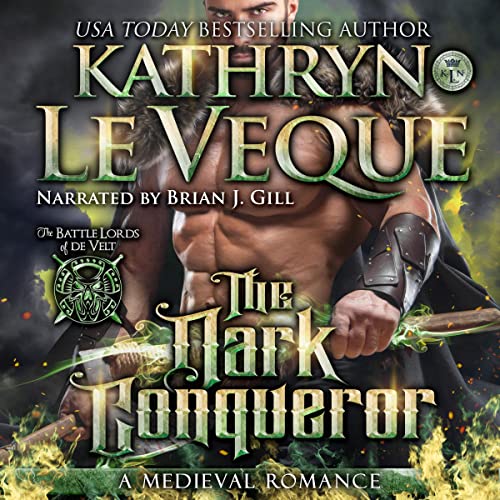 Cassian de Velt came to foster with Christopher de Lohr at a young age. From nearly the first day he arrived at Lioncross Abbey Castle, his gaze was drawn to Brielle de Lohr, Christopher’s second eldest daughter. As children, they shared a friendship that was strong and innocent—enjoying the same things, having the same sense of humor. All of the things that made a strong friendship develop into a love that could not be broken.

Unfortunately, they were only teenagers when Cassian asked Brielle to run away with him so they could be married. That lapse in judgement brought the wrath of Brielle’s father and Cassian was banished. Ashamed and angered, Cassian refused to return home to his family, instead, finding a lucrative position with the elderly Earl of Colchester. When the earl suffers a reversal of fortune at the hands of the king, Cassian is out of a job.

He finds his calling—and his fortune—on the tournament circuit as the knight known as The Dark Conqueror.

Cassian always hoped to build his fortune, and his reputation, and return for Brielle. That has been his one goal. Ten years later, he returns for her, rich and powerful. Brielle is thrilled to see him again, for in all those years, she never married. She refused to entertain suitors. But Cassian returns with a secret, something he won’t speak of, something Brielle only becomes aware of through his odd behavior. When Brielle’s sister, a former spy for William Marshal, begins to probe, an astonishing story begins to emerge. What was thought to be a secret is really, in truth, a duty.

Will Cassian’s duty to one woman be enough to prevent the marriage to the only woman he’s ever loved?

What listeners say about The Dark Conqueror