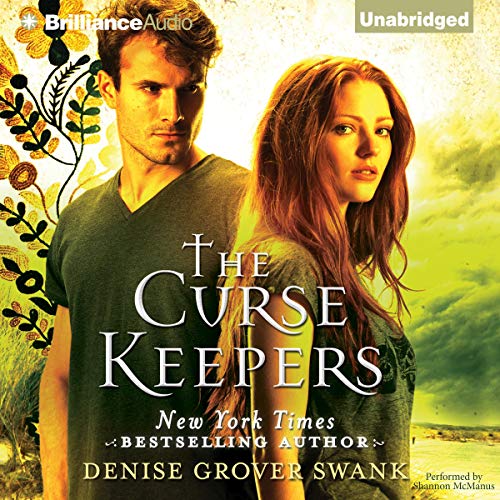 The wall between our world and that of vengeful spirits has protected humanity for more than 400 years. It's about to come crashing down.

Ellie Lancaster has lived her whole life by the site of the mysterious Lost Colony of Roanoke, the Virginia settlement that vanished without a trace around 1590. Ellie is a Curse Keeper, the direct descendant of one of the two men who banished the spirits of a warring tribe from the material realm. The story goes that if the two Curse Keepers ever meet again, the countdown to the death of the curse will begin, the gate will open, and the raging Native American spirits will be unleashed to seek their revenge.

Ellie has always taken the legend for a harmless fairy tale. Until she meets the darkly handsome, but downright infuriating, Collin Dailey and realizes that he is the other Curse Keeper. The prophecy is coming true. Now Ellie and Collin must battle supernatural forces and their loathing - and passion - for each other to set things right.

What listeners say about The Curse Keepers

Great paranormal romance made even better by fantastic performance. I loved the Roanoke setting and the laid back small town vibe. In typical fashion the two protagonists fight against their mutual attraction with lots of wise cracks before finally coming to their senses. The twist in the ending means I have to get the rest of the series to find out what happens next.

I'd recommend the story, but not this recording

Recording was tinny throughout & ruined the enjoyment of the story. The voice she used for Ellie sounded bored throughout.

omg this book is amazing i loved it

The narrator is incredible. It's just a shame about the story, buried beneath insisting the hero is sexy instead of belittling, just down right rude and derogatory toward the protagonist. It probably lost my last shred of true interest when the protagonist made Collin pretend to be a gay man to "insult" him and Collin did, indeed, take offence.

Where does The Curse Keepers rank among all the audiobooks you’ve listened to so far?

It's my first audible experience and this was just amazing! I've read the book and because it's one of my favorites I wanted to listen to it on audible as well. I'm glad I did it!

The story line with so many twists and characters written well I love them!

What does Shannon McManus bring to the story that you wouldn’t experience if you had only read the book?

Shannon McMannus is amazing! I love her voice! She brings all to story even more alive than I could imagine. Perfect addition! Now I can't imagine this book without her voice! LOVE!

I'm so not fan about films after I've read a book because no film compares the book, most of them are 10 times worse than book because they change even story lines...

Couldn't really decide if I liked this or not. It's okay but not brilliant. The main character is big on self-pity which got annoying very quickly, and the main male character isn't particularly likeable either. The narrator wasn't great. Her voice is quite monotone, and she doesn't put much expression into her reading.

Overall this was a something of nothing book. I might get the next one to see if the story or characters improve, but I won't hold my breath.

Great story but not well executed

I really liked the story and the idea. Narrator was great. But I could not get over the weak main character. She was not very likeabke. She was very slow to figure things out (like dumb) and wined repeatedly about the same things. If she was really supposed to save the world, then we would be doomed. She was doing her laundry the last day???? Priorities.... Ugh I really wanted to like it but I won't be reading the next ones.

The beginning could of been stronger.

That it actually turned out good. I about gave up in the beginning because it seem like a young reader kind of book.

This book starts off seeming like a young teen read and grows into something way more than that. Stick with the book through the rough start because it gets much better. At times this book is heavy on the foal language. The story is actually pretty decent about to start the second book.

Trite and overdone despite interesting premise...

There are three things good about this book:

1. I got to listen to in through Kindle Unlimited for free, i.e. I didn't have to pay for this.

2. I listened to it rather than read it so I mostly avoided any grammatical errors that I might have focused on instead of the story.

This book had so much promise in the beginning. The introduction of the characters, the setting, the mythology are all the reasons why I picked up the book in the first place.


Then, the author seems to have given up and just gone through every romance and soft core erotica written since the seventies and used every single cliché in and out of the book.

The characters do not grow with the experience. They only wobble about in their contrived scenes. Ellie goes from responsible, boring, predictable to sexually driven waif in less than two chapters.

You'll like it if you skim through the contrived scenes and focus on the fictional mythology.

You won't like it if your tastes are a bit more demanding, if you understand that the changes in character come slowly as people learn, if at all.

The ABSOLUTE WORST book I've EVER spent a dime on! Horrible storyline, narrator, characters. I wanted my money back immediately! DON'T WASTE YOUR TIME OR MONEY!

Great story idea... but a lot of issues. Not her best layout. Ellie wasn't Swank's best female either, it was like she was aiming for strong and edgy and missed the mark with crude and overly insecure. (spoiler alerts ahead) Collin's romance could have been better developed to make his connection more believable, rather than all at once. The story didn't really convey the gravity of his actions at the end in such a way that I empathized with Ellie's reaction. Or is the reader supposed to be left disagreeing with the heroine?

I felt like a lot of the curse words were unnecessary. To me, it took interest away from the story.

this was an awful story for me. it was so boring.

I didn't like anything about it. it kept me hanging just enough to want to see what happens in the end til I got a past half way. then I just went to the last chapter and tag the ending. wish I would've done it earlier.

The story was very good and the preformance was great but way too many f _ _ _ s inserted. Would have been much better with out it.

wow. I wasn't not expecting this to be good.

I loved it. I first downloaded this book thinking it would be a good book to keep me entertained while I wait at the doctors office or before bed...but I was hooked! It had a few cheese moments but it's very fast moving. I couldn't put it down.

What would have made The Curse Keepers better?

The story lacked a full plot, plenty of dialogue but no bones behind the words. Tons of unanswered questions. Narration was very nasal and boring, but then again she didn't have much to work with. This story is also written for a 17 year old and belongs in the teen romance/mystical section

Would you ever listen to anything by Denise Grover Swank again?

too nasal and her characters voices sound very similar, lots of valley girl meets west Virginia. I lived in Kill Devil Hills, I did not hear accents like that

boring, I tried to return it all together but Audible didn't allow the return