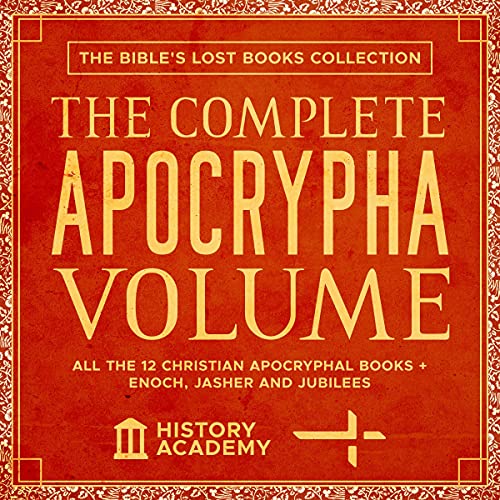 Etymologically, the word "apocrypha" means "things that are hidden", but why they were hidden is not clear.

This is the only modern translation of the complete collection of deuterocanonical books known popularly as "The Apocrypha" that also includes Enoch, Jasher, and Jubilees. The Literal Standard Version (LSV) is a modern translation that stays true to the original manuscripts.

These ancient texts provide commentators’ valuable insight into what many ancient Jews and early Christians believed when, “God, who at sundry times and in divers manners spake in time past unto the fathers by the prophets” (Heb. 1:1).

The number of books in the Bible depends on which Bible is being referenced. Protestant and Catholic churches recognize 27 New Testament books. Protestants recognize 39 books of the Jewish canon in the Old Testament. Roman Catholics hold 46 books of the Old Testament as canon, along with expanded versions of Esther and Daniel. In addition to the 73 books of the Catholic Bible, the Orthodox Church adds three more books to their canon. By far, the largest canon of all is found in the Ethiopic Church, whose Bible totals 81 books. This Apocryphal volume contains the books of the Catholic, Orthodox, and Ethiopic Bibles.

The Books of Enoch, Jubilees, and Jasher together in one volume:

Enoch is derived from the R.H. Charles translation of The Book of Enoch reprinted and published under that name in 1917 with reworked verse numbers (usually at sentence beginnings) for a more uniform pattern and more fluent reading experience.

Jubilees is derived from the R.H. Charles translation of The Book of Jubilees, or the Little Genesis reprinted and published under that name in 1917 excluding the [Anno Mundi] date stamps, for a more uniform pattern and more fluent reading experience.

Jasher is derived from the texts of The Book of Jasher published by J.H. Parry & Company 1887. The translator of the text is unknown to the editor.

The texts were carefully reformatted and reproduced to provide the listener with a comprehensive collection of the most critical lost, rejected, and forgotten books of the Bible. In an effort to build an all-in-one volume of these texts; we present to you the The Apocrypha Collection.

With new texts, updated introductions, a glossary of terms, and other new additions, this will become the definitive translation of the Dead Sea Scrolls.

History Academy represents a global bookshelf of the best works throughout history and across genres and disciplines.

What listeners say about The Complete Apocrypha Volume

If you love the word, this is for you!

I just finished this audio-book a couple of days ago and it has a lot of pertinent information that everyone needs to know when it comes to eternal salvation, how to treat one another, what do and not do, obey the commandments of El Elohim and so much more.

Admittedly, I am still trying to get through this. The first book sounds like you are listen to a poorly automated response from a call center. The incorrect emPHAsis on the wrong syllAHble. Exactly the same pause lengths. Currently on the Book of Jasper, but really struggling with the narration albeit far better. A huge improvement but still a C-. Will update if I can get through it.

Worst narration ever. Way too many miss pronounced names of places. Drawl and slow. Almost turned the book off five times. Only the content me going. Out of 172 books in my library, some of which are college lectures and physics books. None so poorly narrated as this.

A classic must have

I can now see why some books weren't canonized. The church would lose control of its flock. Hollywood would portray the Bible as a science fiction novel. It did, however, fill in some of the gaps about the existence of Enoch and his son. As well as, expanding the role of Ezra and, the understanding of Jubilees for the Jewish people and their culture.
Loved this audio book.

I am so happy to get to know The Most High on a whole other level because of this audio-book. Thank you for sharing hidden knowledge with us to draw nearer to our father In heaven!

I am interested in exploring all ancient text that I have not previously been exposed to but have heard about.
Fascinating and a audio-book.

Much more in-depth than anticipated

Probably twice as many informative as we expected, and much more in-depth than we anticipated.
I would recommend this audio book to all.

Get the whole story!

This fills in chunks Biblical history that is left out of many modern bibles. Very informative.

The book starts with some guy speculating about the meaning behind the book of Enoch which was a total waste of time. After he's done the books proceeds with the actual texts (in large). if the commentary was not included this would be a 5/5 instead of a 4/5.

Excellent compilation of the Apocrypha audiobook