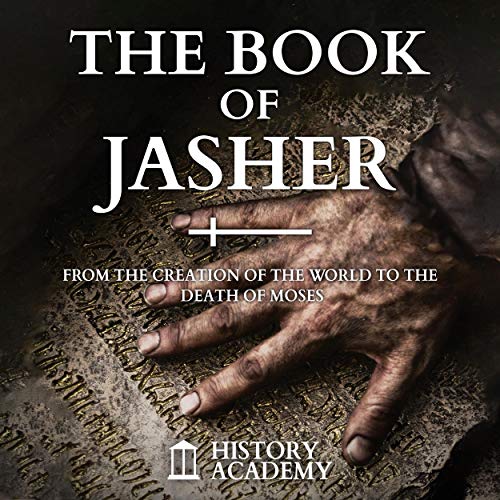 The Book of Jasher

By: History Academy,Paul Chaney
Narrated by: Leanne Bennet
Try for £0.00

There are 13 ancient history books that are mentioned and recommended by the Bible. The Ancient Book of Jasher is the only one of the 13 that still exists.

The Book of Jasher covers the Mosaic period of the Bible presented in Genesis, Exodus, Numbers, Deuteronomy, and Joshua in greater detail and with explanations not found in the present Old Testament documents. This apocryphal book of the Bible has been considered by some to be the original beginning to the Bible and is referenced in both the Book of Joshua and the Second Book of Samuel.

One of the non-canonical books referenced in the Bible, The Book of Jasher spans the Bible books of Genesis through Joshua. For many, this ancient manuscript fills in blanks left by some biblical accounts - including the stories of Adam and Eve, Noah, and the Tower of Babel. The Book of Jasher provides readers with interesting, important, and perhaps otherwise ignored insights into the first 2,000 years of biblical history.

This work has been selected by scholars as being culturally important, and is part of the knowledge base of civilization as we know it. This work was reproduced from the original artifact.

History Academy strives to present Kindle, paperback, and audiobook versions of authentic, unabridged historical texts from prior eras which contain a variety of points of view.

The Book of Jashar was compiled from the Babylonian Talmud and other Jewish sources, and intermixed with Arabic legends and passages of the Bible.

The Book of Jashar is the normal English name (used by e.g., the King James Bible) of a work known in the original Hebrew as Sefer haYashar. It is the best known of several "lost books of the Old Testament", books referenced in the Hebrew Bible of which no copies are known to exist. The original Hebrew translates as "Book of the Upright". The translation "Book of the Just Man" is the traditional Greek and Latin translation, while the transliterated form "Jasher" is found in the King James Bible, 1611.

This title was misread as 'Jasher', and at some point Jasher was treated as a proper name; however the pronoun 'the' (hebrew 'ha') never preceeds proper names.

The Bible has a few books in the Old Testament mentioning books that were considered lost, among them is the book of Jasher. This particular extracanonical book was originally written and printed in Hebrew in 1552, and later in Venice in 1625. Even though most skeptics don’t consider it authentic because no copy older than the 1625 Hebrew edition is found today, there is a similar passage in this Book of Jasher and the Genesis Apocryphon found among the Dead Sea Scrolls in 1947, which could lead us to think that maybe the Book of Jasher is really at least 2000 years old.

What listeners say about The Book of Jasher

I downloaded several audible versions of The Book of Jasher since there are numerous free versions. The problem was the narration was simply not good on any of the ones I checked. This narration is actually quite good and easy to listen to. Perhaps narrator is a matter of personal preference but for me, this narrator stood out.

I think the story was very insightful and gave a lot of great perspective. I would recommend it highly.

Wow this was truly exciting for me I’ve read the Bible several times but this audiobook makes Genesis come alive to see how important Fathers to sons relationships are to God also how Faithful Men of God can rock the World literally!

I really enjoyed this audiobook, it gives a more detailed account of the story of Joshua.

It should've remained in the HOLY BIBLE...! I chose this book as ONE of my FIRST earned credits. Because I didn't think there was a better choice , other than the other books of the Apocrophies.. I believe ANYONE who loves New refreshing HOLY Spirit experiences, then here is your book..!!!

ANOTHER MISSING LINK TO GOD'S TRUTH..!!

I'm so happy and blessed with this AUDIOBOOK.. I'M so thankful and blessed by & with every chapter and verse... This is an excellent & Holy BOOK...!!

There is so much old testament explained in this audiobook so that many generations come together in my understanding. Thank you.

Finally!!! I have been waiting on this audiobook. Wonderful!!!! I am so pleased!!! Thank you so much

This audiobook perfectly parallels scriptures a hidden gem for our times, so glad to find it.