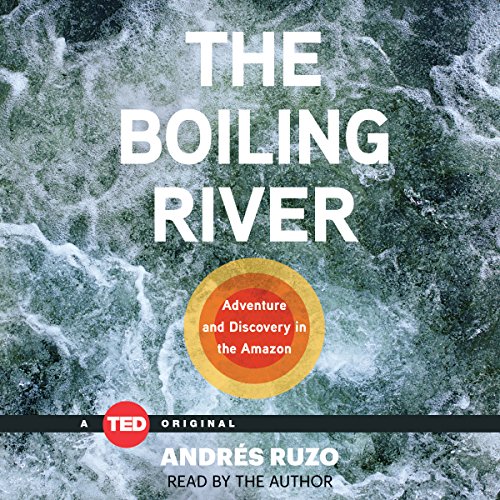 In this exciting adventure mixed with amazing scientific study, a young, exuberant explorer and geoscientist journeys deep into the Amazon - where rivers boil and legends come to life.

When Andrés Ruzo was just a small boy in Peru, his grandfather told him the story of a mysterious legend: There is a river, deep in the Amazon, that boils as if a fire burns below it. Twelve years later, Ruzo - now a geoscientist - hears his aunt mention that she herself had visited this strange river.

Determined to discover if the boiling river is real, Ruzo sets out on a journey deep into the Amazon. What he finds astounds him: In this long, wide, and winding river, the waters run so hot that locals brew tea in them; small animals that fall in are instantly cooked. As he studies the river, Ruzo faces challenges more complex than he had ever imaged.

The Boiling River follows this young explorer as he navigates a tangle of competing interests - local shamans, illegal cattle farmers and loggers, and oil companies. This true account reads like a modern-day adventure, complete with extraordinary characters, captivating plot twists, and jaw-dropping details - including a never-before-published account about this incredible natural wonder. Ultimately, though, The Boiling River is about a man trying to understand the moral obligation that comes with scientific discovery - to protect a sacred site from misuse, neglect, and even from his own discovery.

What listeners say about The Boiling River

Fantastic story about the Peruvian Amazon.

Every once in a while the right person arrives at the right time. Bravo Andrés!

The modern and the ancient

A very nicely done combination of personal discovery, scientific discovery and scientific field work. These are combined with a powerful message of preservation of the unique Amazon ecology which is under continuous and voracious attack by both poachers and modernity. The audio book is read by the author who is quite skilled at this and the personal inflections are a valuable contribution to the impact of the story. Get the Kindle book and follow along for both the place names and for the well chosen images in each chapter.

Ruzo tells the true story of finding the mythical Amazonian boiling river. He couches the story in myth, history, culture, geography, and geology arguing the importance of saving natural resources. His excitement about the topic is contagious.

You can hear his passion in his voice, and the whole thing embodies a lot of hope.

I've always been interested in Peru, every since I was little I wanted to climb to Machu Pichu. Now I have another reason to go! Thank you Adres Ruzo!