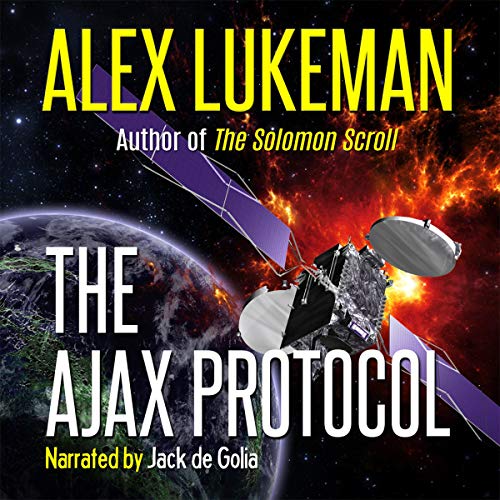 The Project is a Black Ops intelligence unit reporting only to the president of the United States. When an assassination attempt takes the president out of commission, the Project is caught up in a conspiracy that threatens to spark a world war and runs a lot deeper than just trying to kill the leader of the free world.

Led by Director Elizabeth Harker, the Project team discovers a cold-hearted plot to turn America into a totalitarian police state. Betrayed by powerful enemies at home and forced to rely on doubtful allies abroad, Harker and her team are driven underground. With time running out, they must stop the conspirators before they destroy everything America stands for.

At the same time, team leader Nick Carter and his lover Selena Connor struggle to commit to each other in a covert world where love and compassion are in short supply and enemies lie in wait at every turn.

The Ajax Protocol could be taken from tomorrow's headlines. It will disturb you and keep you listening to the end.

What listeners say about The Ajax Protocol

Nick and the team are back but they have been forced into hiding after a assassination attempt on the PONTUS puts him out of commission and the Vice President tries to shut down the Project not knowing he is but a pawn in a bigger conspiracy to destroy everything America stands for.

I loved this book just as much as I loved the six books before it. They have all been action packed and exciting from start to finish. I have kept with the audible version of the series since narrator Jack de Golia is so good at all the characters and keeping the story so exciting, he keeps me on the edge of my seat just wondering what will happen to next to the team, sometimes I hate when I have to turn it off. Mr. de Golia has given these characters and stories their life and a real pulse, I have enjoyed it so much I will stick with the audios.

But whichever format you choose I think you will enjoy the Project series.

The Project series has me completely engrossed. Jack de Golia does a fantastic job making each of Lukeman's characters come to life. I have listened to all seven of the series, and enjoy the continuing plot line and the development of the characters.

Looking forward to book 8 in the series, and hoping that Lukeman and de Golia maintain their partnership.

This was a really good book.I like this series a lot! Jack de Golia was a terrific narrator.The President has had a heart attack,or is it something else?While he is laid up others are out to destroy the world.I was given this free review copy audiobook at my request and have voluntarily left this review

A plot to take out the president the team goes underground,.The conspiracy is far reaching and to stop. Good story and narration
Given audio for my voluntary review and my honest opinion

I knew you would give your seat, can't put the book down, I can keep you involved all the way through, no no dead spots in the storyline is consistent.