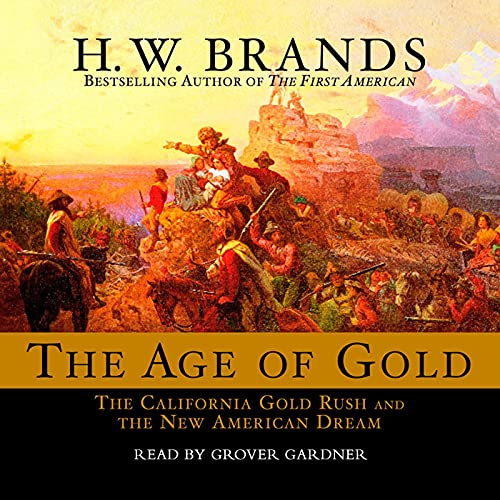 The Age of Gold

By the author of the best-selling Pulitzer Prize finalist

The first American - they went west to change their lives and in the bargain they changed the world. This is the extraordinary story of the men and women of the Gold Rush.

When gold was first discovered on the American River above Sutter's Fort in January 1848, California was sparsely populated frontier territory not yet ceded to the United States from Mexixo. The discovery triggered a massive influx as hundreds of thousands of people scrambled to California in search of riches, braving dangerous journeys across the Pacific, around Cape Horn, and through the Isthmus of Panama, as well as across America's vast, unsettled wilderness.

Cities sprang up overnight, in response to the demand for supplies and services of all kinds. By 1850, California had become a state - the fastest journey to statehood in US history. It had also become a symbol of what America stood for and of where it was going.

In The Age of Gold, H. W. Brands explores the far-reaching implications of this pivotal point in U.S. history, weaving the politics of the times with the gripping stories of individuals that displays both the best and the worse of the American character. He discusses the national issues that exploded around the ratification of California's statehood, hastening the clouds that would lead to the Civil War.

He tells the stories of the great fortunes made by such memorable figures as John and Jessie Fremont, Leland Stanford and George Hearst - and of great fortunes lost by hundreds now forgotten by history. And he reveals the profound effect of the Gold Rush on the way Americans viewed their destinies, as the Puritan ethic of hard work and the gradual accumulation of worldly riches gave way to the notion of getting rich quickly.

"With solid research and a sprightly narrative, Brands's portrait of the gold rush is an enlightening analysis of a transformative period for California and America." ( Publishers Weekly)
"Brands writes history as the art of storytelling that enthralls and informs the reader. Highly recommended." ( Library Journal)
"An important work of history." ( Booklist)
"Exuberant....Entertaining, lively....Brands [is] a wonderfully skilled narrative historian." ( Los Angeles Times)
"An engrossing, multifaceted history." ( The New York Times)

What listeners say about The Age of Gold

There is an abridged version of this title, and while I found the book interesting I wish I'd gone for the shorter version.

What will your next listen be?

Probably The end of an affair, by Graham Greene

Which character – as performed by Grover Gardner – was your favourite?

This is a factual history rather than a novel, but my favourite character was the San Franciso store keep who publicized the gold rush so as to make his fortune selling equipment to the prospectors.

Could you see The Age of Gold being made into a movie or a TV series? Who would the stars be?

Yes, though obviously there have been many documentaries made about the gold rush. This being the case it would be unlikely that named actors would be a requirement for the show

I really enjoyed this book but it was incredibly detailed to a point where the actual geological history of the gold's formation was discussed at some length. I have always been very interested in the subject of The Californian Gold rush but felt that this description took a lot of the exoticism out of the subject and was rather dry. Very interesting though for all that, and very engagingly read.

HW Brands is a master!

Brilliant book, eloquently written, giving the broad portrait of a world in which the 19th century gold rush had happened. But please, do fix the chapter divisions! The chapters of audiobook are by no means correlated with the actual chapters! Its infuriatingly difficult to go back to certain part of the book only to realise that chapter 12 starts 2 mins 46 seconds into chapter 17….🤦🏻‍♂️

I found this book to be a fascinating account of the California gold rush and what ensued. The audio version is split into three parts so I thought it might be a bit long and boring but it really wasn't. I feel it taught me a lot.

This book is well research and written. A good listen for those who love tails of the California gold Rush.

The recording of this book is a bit dated and could be better in my opinion.

I'm now about a third of the way through "The Age of Gold" and I'm hooked. It's a very interesting social history of the gold rush, and has certainly managed to increase yet further my interest in this period of history.

HW Brands shares the stories of a diverse range of people affected by the rush, and explains how they became united by the discovery of gold in California.

I was enthralled by the original testimonies of many of the gold hunters. Brands frequently quotes diaries and letters and these have given me a much deeper insight into the period - although I had known that the trip to California was far from easy, I've been shocked at quite how bad it was at times!

I would certainly recommend this to anyone with even a passing interest in the gold rush, or American history, society and culture. In my opinion, it's a fascinating story of a fascinating time and the only reason I haven't given it five stars is because this is my first Audible download, and so I don't yet have other books to which to compare it!

Again, the author brings history to life! A gripping telling of the stories behind the historical period.

A great slice of history

This is a another great slice of history that fills out the narrative of the American experience. H.W. Brands does an excellent job of tying together the east and west formation of our country. The age of gold is a world changing event that moved masses of people around the world and set an example the echoed through the ages. This book puts in context the human nature that drives humanity to seek at all costs the hope of sudden riches. It explanes much about our world and leaves the reader wiser for the time spent listening. Highly recommended. The reader is unobtrusive if not spectacular.

Gold Rush and beyond!

This is the most complete book I have ever read about the California Gold Rush! The book follows prospectors to California from all over the globe. How they fared and what happened after the Gold Rush of 49.

Besides the rush for gold The Age of Gold also does a good job with the histories of John C. Fremont. Leland Stanford, M. Vallejo, A. Sutter, and many many more. Also mentioned, in this book, is how the gold effected Later Day Saints, The Civil War, Transcon. Railroad, Pony Express, just to mention a few.

If you love history you will love this book!

Must listen to understand the West.

This book is really a "page turner". Grover Gardiner as always does a masterful job narrating. The cast of characters that made up early California is a who's who of personalities you'll all recognize. Part of the fun is hearing the names of people you know from other historical events being tied to California and the gold rush.

Very interesting but not riveting

interesting but would not read again

It was an interesting topic but somewhat disjointed I felt the last 1/3 was more organised.

A global perspective of the gold rush.

What does Grover Gardner bring to the story that you wouldn’t experience if you just read the book?

A bit disappointed that this wasn't a more detailed focus on the California gold rush. It was more of a global perspective which would have been fine if represented as such. In fact it also spent very little time on the actual day to day operations of a gold mine, and not enough detail as to the mechanics. It was okay.

What made the experience of listening to The Age of Gold the most enjoyable?

A broad scope coverage of the gold rush that becomes a riveting history of the settlement of the American west.

What was one of the most memorable moments of The Age of Gold?

The coverage of the suffering of those on the overland journey to California was quite good.

The Author weaves the history of California into a wonderful tail! My kids love this story! Although they have to listen to it in small chunks.