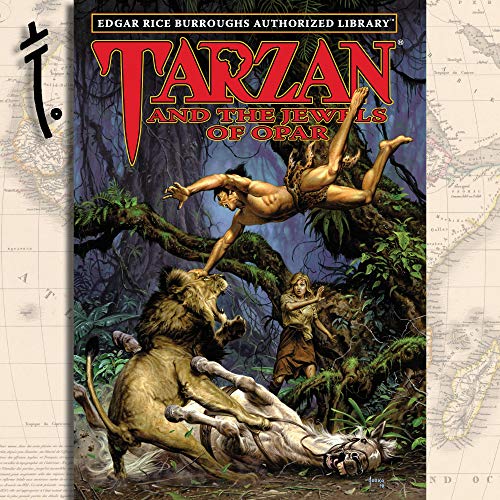 Tarzan and the Jewels of Opar

By: Edgar Rice Burroughs
Narrated by: Ben Dooley
Try for £0.00

Lieutenant Albert Werper had only the prestige of the name he had dishonored to thank for his narrow escape from being cashiered. At first he had been humbly thankful, too, that they had sent him to this Godforsaken Congo post instead of court-martialing him, as he had so justly deserved; but now six months of the monotony, the frightful isolation and the loneliness had wrought a change. The young man brooded continually over his fate. His days were filled with morbid self-pity, which eventually engendered in his weak and vacillating mind a hatred for those who had sent him here - for the very men he had at first inwardly thanked for saving him from the ignominy of degradation.

He regretted the gay life of Brussels as he never had regretted the sins which had snatched him from that gayest of capitals, and as the days passed he came to center his resentment upon the representative in Congo land of the authority which had exiled him - his captain and immediate superior.

This officer was a cold, taciturn man, inspiring little love in those directly beneath him, yet respected and feared by the black soldiers of his little command. Werper was accustomed to sit for hours glaring at his superior as the two sat upon the veranda of their common quarters, smoking their evening cigarettes in a silence which neither seemed desirous of breaking.

What listeners say about Tarzan and the Jewels of Opar