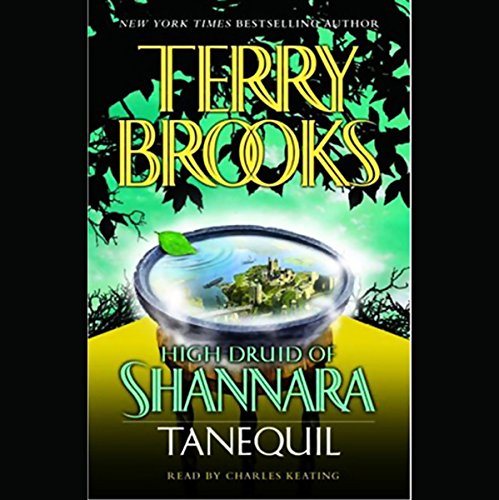 By: Terry Brooks
Narrated by: Charles Keating
Try for £0.00

Loyal to none but herself and lethal even to those closest to her, Shadea a'Ru now holds sway as High Druid of Paranor, her acension to power all but unchallenged in the wake of Grianne Ohmsford's sudden, mysterious vanishing. Only Shadea and her catspaw, the treacherous Prime Minister Sen Dunsidan, know the secret fate of the true Ard Rhys. And now Grianne languishes in the fearsome and inescapable netherworld called the Forbidding.

Their bloodless coup a success, the corrupt pair, and their confederates within the Druid Council, seek to make their dominion over the Four Lands absolute, with the aid of a devastating new weapon. But it could all be undone if Grianne's young nephew, Penderrin, succeeds in his frantic quest to rescue her.

To breach the Forbidding and bring Grianne back to the natural world means finding the fabled Tanequil. That means journeying into the Inkrim, a dreaded region thick with shadows and haunted by harrowing legends. It also means striking a bargain more dire than Pen could ever imagine. But there can be no turning back. For in her unearthly prison, the Ard Rhys faces a demonic plight too hideous to countenance.

What listeners say about Tanequil

Good but need the ending and beginning was much better then the midd of the secures.

Fast paced and constantly shifting in new directions. Taking you on a new adventure. What I like is the unpredictability of the story. You don't know what is coming and I like that.

wonderful narration! it being heavily abridged is something i would like to have known befire hand.