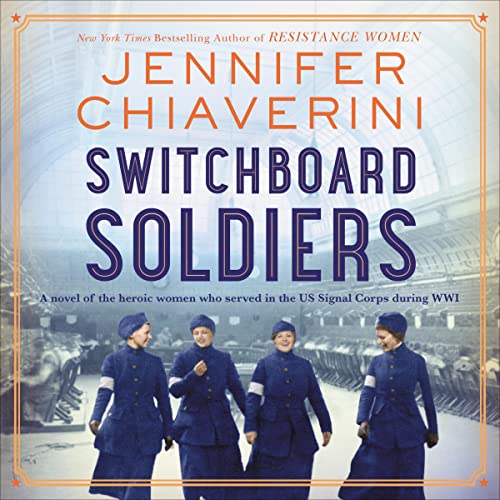 By: Jennifer Chiaverini
Narrated by: Saskia Maarleveld
Try for £0.00

From New York Times best-selling author Jennifer Chiaverini, a bold, revelatory novel about one of the great untold stories of World War I—the women of the US Army Signal Corps, who broke down gender barriers in the military, smashed the workplace glass ceiling, and battled a pandemic as they helped lead the Allies to victory.

In June 1917, General John Pershing arrived in France to establish American forces in Europe. He immediately found himself unable to communicate with troops in the field. Pershing needed operators who could swiftly and accurately connect multiple calls, speak fluent French and English, remain steady under fire, and be utterly discreet, since the calls often conveyed classified information.

At the time, nearly all well-trained American telephone operators were women—but women were not permitted to enlist, or even to vote in most states. Nevertheless, the US Army Signal Corps promptly began recruiting them.

More than 7,600 women responded, including Grace Banker of New Jersey, a switchboard instructor with AT&T and an alumna of Barnard College; Marie Miossec, a Frenchwoman and aspiring opera singer; and Valerie DeSmedt, a 20-year-old Pacific Telephone operator from Los Angeles, determined to strike a blow for her native Belgium.

They were among the first women sworn into the US Army under the Articles of War. The male soldiers they had replaced had needed one minute to connect each call. The switchboard soldiers could do it in ten seconds.

The risk of death was real—the women worked as bombs fell around them—as was the threat of a deadly new disease: the Spanish Flu. Not all of the telephone operators would survive.

Sometimes mocked as the “hello girls”, the women of the US Army Signal Corps served with honor and played an essential role in achieving the Allied victory. Their story has never been the focus of a novel...until now.

What listeners say about Switchboard Soldiers

Having lots of trouble with the narration

I have listened to a few hundred Audible books. I’ve listened to and read a lot of Chiaverini novels. A first for me, I may not be able to finish this book on Audible because of the narration. The narrator is speed reading monotone through the book to the point it’s hard to even follow what is going on. . It’s like an school assignment she wants to get done with. The voice changes from character to character are also overdone, and often substituting loud for voice changes.

Once again Jennifer introduces us to a group of women who played a major role in our history, but never appear in our history. Thanks

An interesting historical fiction of WWI that I had not learned. Well written and superb narration.

Another great example of women who served with no recognition. They were very brave indeed.

This book was informative and engaging. I learned a great deal highly recommend it wonderful

I loved this book and couldn’t stop listening, definitely a must read for anyone or a great pick for book club.

Never heard about the SWITCHBOARD SOLDIERS before. Thank you ladies for your service and sharing this history of our brave an honorable women.

Although my husband and I are longtime WW I buffs we learned much history from this spellbinding novel. In particular the author’s account of the Lost Battalion was as engaging and enlightening as we’d ever heard.

I was fully enraptured by the story and gained a better feel of the conditions of these locations during WWI.

As a fan of this author’s Elm Creek series, I was not sure how much I’d like this different direction. No worries. It was excellent.