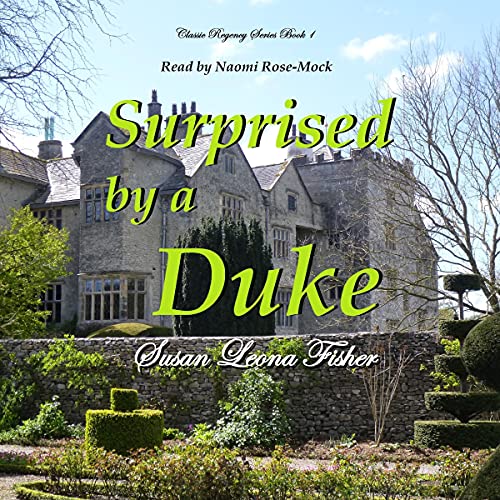 Surprised by a Duke: A Regency Romance

By: Susan Leona Fisher
Narrated by: Naomi Rose-Mock
Try for £0.00

Eighteen-year-old orphan Harriet Thomson has resided with a distant cousin’s aristocratic household since the age of five, first as companion to Prudence, the youngest daughter of house, later as carer of Pru’s ailing father. When he dies, she has to make her own way in the world and finds work as companion to the elderly Countess Arden, who resides in the Dower House on the Hertfordshire estate of the dashingly handsome Duke of Fairbridge.

She realizes at once that he is the same man who helped her save Pru from an embarrassing moment at a Children’s Ball held by his mother six years earlier. He clearly doesn’t remember her, but nevertheless vows to help her uncover the truth about her parents’ deaths.

Meanwhile, as she falls deeper in love with him, she has to watch hopelessly as his mother undertakes her campaign to find him a suitable wife among the haut ton.

What listeners say about Surprised by a Duke: A Regency Romance

I really enjoyed the thoughtful romance between Harriet and Nicholas. I thought the story of how they met and then reconnected years later to be very sweet. I loved how Nicholas was always looking out for her even if he doesn’t understand why he feels drawn to do so. This is another entertaining narration by Naomi Rose-Mock. Her voice always draws me into the story. I would definitely listen to this again.

I loved this book ! A perfect read

Loved the story and characters and how Harriet meets him in the library when 12 and then years later and he doesn’t recognize her. This is a fabulous read and the narrator is really good too. I Would listen to it again.