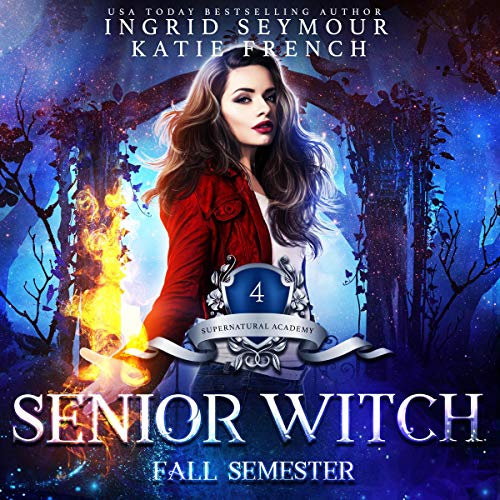 By: Ingrid Seymour,Katie French
Narrated by: Kasi Hollowell
Try for £0.00

The Academy has been taken over by a mass murderer and no one knows but me.

Last year, I fought Regent Nyquist and the forces that sought to destroy everything we hold dear....

This year, I’ve agreed to be a spy, a double agent who aligns herself with the very person who killed people I care about and banished others.

And it sucks worse than the domestic grout cleaning spells we’re now forced to learn.

How long can I pretend to be a good little girl while ancient, crusty old men run this academy into the ground? Long enough to learn exactly what Nyquist is planning and figure out a way to stop him. He can’t get away with this. I will fight him as long as it takes, even if it kills me.

You will love the continuation of this magical academy series with kick-ass action, hot romance, and earth-shattering magic that will make you tingle in all the right places.

What listeners say about Supernatural Academy

Following the events of Book 3, and finding out that Dean McIntosh is actually still alive, Charlie is asked to return to the Academy (which has now fallen under the control of the Regents), and be a student under Nyquist, and see if she can remain close to him, discover his plans, and look for an opportunity to try and help bring him down.
Charlie of course, jumps at the opportunity, never one to turn away from the selfless act of helping others, regardless of the danger to herself. And so she returns to the Supernatural Academy, which is now under the rule of Nyquist and his cronies.
This book is rather a fascinating look at culture, and how much things have changed over the last 50+yrs, as Nyquist quickly makes the Academy something that is straight out of the 50s or 60s, in which Men are of a higher standard, do the proper classes, have the better accommodations, are looked after better, and do not have to follow the rules. Whereas women, (notice I use a lower case on the word ‘women’ to denote their lower class in this setting, since according to Nyquist and his mob, they are good for making dinner and that’s about it), are given the poorest of accommodation (some bunks in the worst of the buildings), they take classes on how to look after their Men and the Men’s homes – how to clean, cook, and do ‘Women’s Work’ – but they do no courses (not even history), that would pass as being real magic. Whilst it is almost amusing in the book, as Disha, Bridget and Charlie get angry, and the rest of the girls almost riot over the new state of affairs, it is worth noting that this is how things used to be. It just shows how much things have changed in cultural evolution and how backward things used to be (and how backward some people still are in that there are those that would still prefer to see this sort of thing even now).
Equality has come a long way, but it has been a ridiculous struggle, and in this book, the Authors make it clear that this is no small feat for the girls as they battle the powers that be in their fight for equality in this setting to.
The Authors do an exceptional job in creating this almost time-warp of a 1950s education facility, as well as some very devious and cruel Males that run the show.
Charlie’s character is just outstanding in this particular evolution of the story, as she not only has to deal with Nyquist, but all of the other women in the Academy hating her for becoming the person she is, not knowing her true mission.
I don’t want to give away spoilers, but again, there are a couple of really funny characters in this book (because that has been one of the really fantastic things in this series, Seymour and French have written a really gritty and emotive story, that at times is incredibly powerful – but, they have this streak of humour running through it that keeps it light-hearted enough that the story does not tip over into something totally dark and depressing), along with Lawson, there is Cruise Knightley – who, starts out to be a bit of a ‘punching bag’ for the girls as he is a total moron – but later in the book shows that he actually has a bit more depth than the average wading pool, and it is some of these surprises that really keep you on your toes in this book.
There are some elements in this story that kind of reminded me of the 5th Harry Potter Movie, in which the Evil Teachers come to Hogwarts, except in this version, it is not about funny jokes, and kids getting back at pink buffoons, instead, it is quite dark. Nyquist and the Regents have nothing to hold them back, and thus their quest for power falls to the dark side very quickly.
This is a really intelligent Urban Fantasy, in that the story has been well thought out to cover aspects (such as other major characters on the run, so unable to help those at the Academy), using some fun characters to stop it going to dark and making it almost gloomy, whereas this has some hilarious moments still, and most of all, there is still some great Character development.
This series continues to be spell binding (I’m sorry, I couldn’t resist!), and is a Fantastic read, not only if you love Urban Fantasy, but a good Thriller, a bit of Rom, well actually, there is quite a bit of Romance, but not enough to overwhelm the story, just enough to make it interesting, and there is enough Spells, Combat and Action to keep you turning pages late into the night. Fall Semester, which is Part 1 of Senior Witch, is a brilliant addition to the series, and I can’t wait to read the conclusion!!
Kasi Hollowell continues to provide outstanding Narration, with the perfect voice for the young, vivacious Charlie, who is always in the thick of things, whether it be trouble, action or Rowan. Hollowell captures this with consummate ease, letting us hear the emotion in her voice whether than be fear for her friends or her situation, anger at something, or pure lust at wanting to jump Rowan. She does a wonderful job with other characters to, both male and female, capturing Rowan from angry Vampire, to love-sick, lustful boyfriend, no one can do the excitable Disha like Hollowell.
The Narration is just outstanding, bringing this series to life in a way that you just don’t get from reading the books, and I strongly recommend that you listen to this series rather than read it, the Narration is so good!!