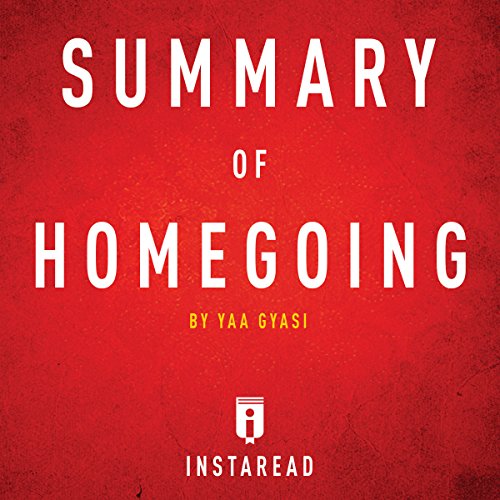 By: Instaread
Narrated by: Kristi Burns
Try for £0.00

Please note: This is summary and analysis of the book and not the original book.

Homegoing by Yaa Gyasi is a novel in stories about the Atlantic slave trade and its aftermath. The novel begins with the stories of two African half-sisters of the Fante and Asante tribes: Effia and Esi. Effia is born in the late 18th century in Fanteland on Africa's Gold Coast, on the night of a devastating fire near her father's compound. Her adoptive mother, Baaba, immediately resents her, because Effia is the daughter of her father Cobbe's house girl.

In 1775, when Effia is young, British soldiers from the Cape Coast Castle come to the village. Effia wants to marry Abeeku Badu, who is in line to be chief. But to prevent Effia from marrying him, Baaba tells Effia that she must hide the blood from her first period. She knows that as long as people think Effia is premenstrual, she won't be permitted to marry a Fante man, per tribal customs.

Inside this Instaread summary of Homegoing:

The summary explains the landmark themes of this journey. One would be helped to listen to the summary before listening to the book so one would not get lost among the vast cast of characters, settings, and periods.

Informative Aid to Understanding the Book

What made the experience of listening to Summary of Homegoing by Yaa Gyasi | Includes Analysis the most enjoyable?

The most enjoyable aspects of listening to the Summary of Homegoing by Yaa Gyasi was the analysis of the themes. They are explained with clarity in a way I had felt but missed when I listened to the book. Often, one rushes while listening to an audiobook without paying too much attention to the larger themes. The summary explains the landmark themes of this journey. One would be helped to listen to the summary before listening to the book so one would not get lost among the vast cast of characters, settings, and periods.

It’s important to get names right.

The reader mispronounced every African name. Sure, it’s just a summary and it’s only 30ish minutes long, but imagine using this as an actual resource for “Homegoing” and the reader didn’t even think to ask if she’s properly pronouncing the names of the characters or even the author. Especially after reading the book, it’s annoying that people don’t find getting actual identities right. It’s literally a line in the book “I don’t have anything, but I do have my name.” And that sentiment is repeated later by another character, and here, the names are freaking BUTCHERED over and over till the summary’s end. I don’t like that. Do better for your ethnic titles, characters and listeners. It’s a very ironic slap in the face with the sort of book that “Homegoing” was. I’m actually mad. Over all I guess the summary is cool- but one star for the read. Did she even try and who signed off on this?

Very good representation of the book.

I read the book and I loved it. The reading of the book left me a little less satisfied. As the listener, I kept wondering if the narrator had spent any time with Yaa personally or viewed any of her youtube videos. The pronunciation of a few of the names really bothered me. It shouldn't have, but it did. It didn't take away from the story, but it contributed to my score for performance.

This was a nice accompaniment to the book, it filled in a few things that I missed.