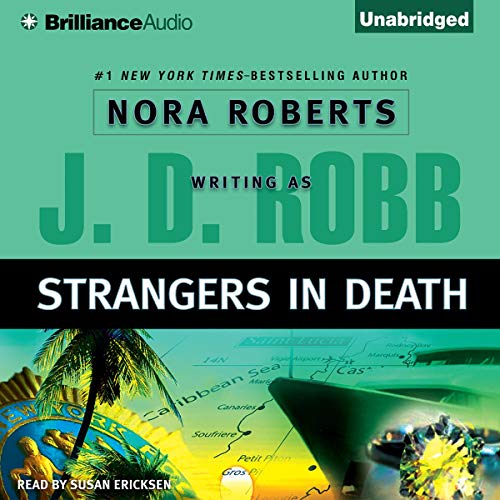 Technology may be different in 2060 New York, yet the city is still a place of many cultures and great divides. And as ever, some murders receive more attention than others - especially those in which the victim is a prominent businessman found in his Park Avenue apartment tied to the bed - and strangled - with cords of black velvet.

It doesn't surprise Lieutenant Eve Dallas that Thomas Anders' scandalous death is a source of titillation and speculation for the public - and humiliation for his family. While everyone else in the city is talking about it, those close to Anders aren't so anxious to do so. Fortunately, because Dallas' billionaire husband, Roarke, happens to own the prime real estate where Anders's sporting-goods firm was headquartered, she has some help with access.

Before long, she's knocking on doors - or barging through them - to look for the answers she needs. But the facts don't add up. Physical evidence suggests that the victim didn't struggle. The security breach in the highly fortified apartment indicates that the killer was someone close to Anders, but everyone's alibi checks out, from the wife who was off in the tropics to the loving nephew who stands to inherit millions. Was this a crime of passion - or a carefully planned execution?

It's up to Dallas to solve a sensational case where all involved guard secrets from one another - and strangers may be connected in unexpected and deadly ways.

"Concisely narrated with verve and humor by Susan Ericksen.... Her Irish accent for Roarke is uncannily believable as is the voice of a character who is suffering from a terrible cold. The production is engaging, and Ericksen's verbal nuances add drama to the novel." (AudioFile)

What listeners say about Strangers in Death

Practically right from the start Eve knew who did it but the book was taken up with the twists and turns that come with trying to prove it. There was nothing about the murderer that you could say was likeable in fact she was a grade A bitch but what an actress. The twists and turns we take and at the end when I must admit I just didn't work out how it was done was genius. JD has got a brilliant imagination this series where by now you think it would be stale just gets better and better.

I picked this series up at about book 5 and it didn't take long to get me hooked. I have read many police procedural book series and this series ranks up there with the best of them. Sometimes it's kind of hard to understand some of the futuristic technology, but what sci-fi/futuristic type novel isn't nowadays? It is full of Nora Roberts' trademark steamy romance scenes and humor, but that only adds to the drama and intrigue of this series. Eve Dallas and her partner Roarke make an excellent pair in solving the many mysterious and action-packed cases they encounter. There is also lots of memorable characters as well. I never miss a book. There is not a bad book in this series. I say sit back, relax, and enjoy one of the best narrators in the business take you through a police adventure that will have you wanting more once it ends. And there are a lot of books to enjoy in this series. Read them all. You will not be able to get enough!!!

I dont agree that this was boring. I would say it was too long breaking down the why and how, since Eve already knew the who. I loved getting an update on Charles and Louise and the jokes and banter between the characters alwasy make me laugh out loud as if they are really chating and I am involved. To me these stories are real and easy to get your self wrapped up in. The story was interesing and murderer is easy to dislike from the beggining (very annyoying and mean).
Happy reading. On to Book 27...

Its often been said in many reviews that to start at the begiing and just keep going is the way to go. ABSOLUTLY. The background characters and their stories are as much a part of this series as the actual gruesome deaths and although each book can each be listened to individually to get the most out of it I feel you need the whole lot. Excellant narration, geat job Susan even though you did have a hiccup with Peabody at one stage. Only 2 to go and I have caught up here's hoping J D Robb has another about to go.

Years ago I got hooked on Eve Dallas' personality and the characters she deals with while on the job in 2060 New York. Then I put the series away and went on to listen to others. On a whim, I started again at book one and have gone straight thru to book 40. Wonderful summer escape. Susan Erickson IS Eve Dallas. She has infused each character with a distinctive voice and personality. I hope there is another 40 books and my friend Eve is forever.

Peabody. Yes, Eve Dallas is a wonderful, flawed personality, but Peabody is a joy. She is always good for a laugh.

Susan Ericksen is an exceptional performer! Her voices throughout this series are consistent, it is such a joy listening to them. You really a find yourself lost in each story and as soon as one book is finished I can't wait to start the next. I wish more audio books would be performed as this. However good some narrators are I still find its hard to distinguish one character from the next in audio, but not with Susan. You won't be disappointed, but start the series from the beginning.

Loved this book, but wanted to hear Ava get hers!

I can't put these books down. They are like candy so I can't wait for the next one!

How could this one be nearly 5 stars?

I adore this series and have been listening from the very first book. But this one was simple not good.

The mystery of the case was, for lack of a better word, boring, because there was no mystery. Eve knew from close to the beginning who did it and pretty much why. The only question was basically how, and to be honest, it was not nearly exciting enough for me to care.

I kept waiting for something to happen in this story and nothing did. There was basically no action the case lacked any of the usual twists and turns and danger that the previous books have had.

The only highlights were a few peripheral stories of Eve's friends, but frankly I rather wished I had saved my money on this one and skipped it all together. How very disappointing.

Another home run in the Eve Dallas series

If you could sum up Strangers in Death in three words, what would they be?

I thoroughly enjoyed the story arc, the villain and of course the consistently excellent elements of the series: the witty banter and relationship development of our Merry Cast of Regulars. And of course there's the steam. Not that I noticed. I've also mentioned before that I'm thinking we are beginning to get more peeks into Rourke's thoughts and those of the other characters. Either I just didn't notice it before (entirely possible) or it's a minor tweak in the usual narrative. I choose to think I've noticed a subtle nuance in the evolution of the series. So there.

Everything. The characters are clearly defined, we always know who is speaking. I cannot imagine anyone else being able to capture Dallas, Rourke, Peabody, McNab, Feeney, Dr. Mira and the rest of the Wacky Gang in the simply outstanding way Susan Ericksen gives them voice. She rocks.

It's almost that good, but no. Frankly, there have only been one or two books I've ever encountered that fall in that category and this is not one of them. But that doesn't mean this isn't one of my favorite series of all time. It's still outstanding. Just not bleary-eyed, marathon, binge-listen worthy.

I'm a Libra. I like mystery and procedural cop novels - and anything else that makes me chuckle. In the literary sense. Get your mind out of the gutter. Sheesh.

I love these characters and this story used the twists and intricacy's of the characters past and connections so well. My new favorite of this series!

Another great listen "in death"

This is a great series. Can't believe I'm already on book 26 in the series.

Lt. Eve Dallas has her work cut out for her with all the crazy homicides she encounters in this series. Each story follows several core characters while introducing new murder victims and killers. Can't get enough and hope new ones come out before I get to the end of the series.