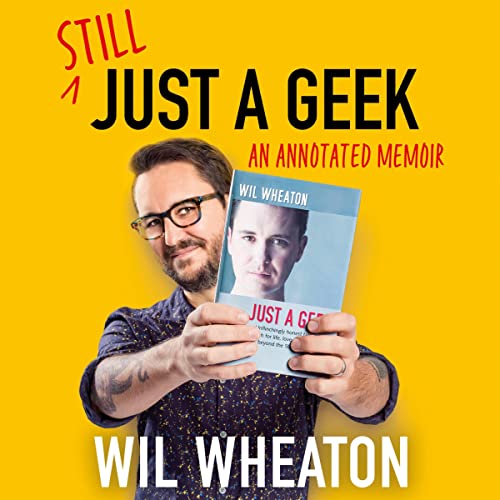 Celebrated actor, personality and all-around nerd Wil Wheaton updates his memoir of collected blog posts with all new material and annotations as he re-examines one of the most interesting lives in Hollywood and fandom!

Ideally, this is what everyone does. But most of us don’t do it in front of millions of people. Wil was a very famous kid—right up until he wasn’t. After that, he wasn’t sure who he was at all.

So, in 2001, he started a blog. It was less about being a famous child than about being a not-so-famous grown-up. He wrote about his pets and his hobbies, punk rock and parenting, board games and birthdays and (most importantly) burritos.

He thought he was writing for an audience of one: himself. To be fair, he was only off by about three million people. In Still Just a Geek, an older, somewhat wiser Wil revisits Just a Geek, his 2004 collection of posts from that blog, with all-new reflections on nerd culture, fame, love, trauma, tragedy and confronting the worst parts of yourself.

Equal parts funny and poignant, Still Just a Geek explores the folly of youth and the pain of experience—and all the strange, awful, beautiful adventures in between.

What listeners say about Still Just a Geek

Not what I expected.

I've not finished the audiobook and am about to return it. It seems clear from the introduction that this book will be one big apology and a bit of a self-cancel of things he has previously said.
I am a massive fan of Will's narration in various audiobooks and will continue to seek out his narration in other stories. However listening to someone try to justify himself to a previously offended audience (that doesn't include me) is not something I'm going to waste 20 hours on.
if that's your kind of thing then it could be great.

An Actor moaning about being an Actor

Couldn’t get past the third chapter, Wills endless apologies about being a entitled person and the approach of just changing the tone of his voice to denote the era or age of himself is just unbearable. It’s a very irritating thing to listen to a celeb moaning about being a celeb and then endlessly apologising for his behaviour in the past is not worth a credit.. a hard pass.

Great listen and really insightful. Loved getting to know Wil Wheaton!! Recommended for nerds like me!!!

I couldn’t stop listening to Wil talk about his whole life! The heartache listening to him struggle with past traumas. Hearing him giggle at recalled events. Feeling annoyed at Jimmy Kibble’s cousin!

This was very well written deeply interesting and incredibly moving.
I suffer from the same diagnosed metal illnesses as will and seeing him truthfully talk so openly about it was very important for me to read as well as very hard and triggering at points .
the unique approach from my experience of this book of him reading and talking about this previous book is really interesting and shows not just his life and amazing story's in shows but also his growth as a write and human .
Brilliant and really interesting human.
His performance in this is so real and raw and brilliant.
Thanks for making me cry Will .

To get to know Wil Wheaton

With Wil Wheaton I cringed, laughed, cried and cringed again. Not always easy material to get through and at times quite uncomfortable, but it is his story, and thus necessary.
I enjoy Wils' narrating in general, but hearing him read his own words with his very real reactions, is something that would be completely absent in any other format.
Thank you Wil for your audio book, it has helped me.

Another case of never meet your heroes

If you are a fan of Wesley Crusher, Gordie Lachance or Will Wheaton in TBBT, then don't buy this book! It will destroy the great memories you have of each of these characters and you will regret reading it. I genuinely wanted to like it, but I couldn't even finish it.

It's whiny, self-centred and filled with chapters of waffle. It jumps around so much it's jarring to listen to. I didn't even like his reading style, it's way too animated and over the top and just comes across false, particular his "apologies".

Interesting reveal of the background hidden struggle of perental exploitation without being at all trivial.

Contrary to some other commenters...

I get the sense that people who describe the book as whiny and apologetic or entitled and woke have little understanding or empathy for the kind struggles described here. This says more about the commenter than the author whose writing is both introspective and self-reflecting in a way that more people should aid to be. I saw myself in-between the lines of the book and heard my voice told through the narration of the Author as he challenged old writings and established a new sense of self-worth and awareness throughout 'Still Just a Geek'. I wish for all to find the patience and kindness in themselves to not judge anyone with similar struggles just because you didn't experience them.

My husband and myself have just finished listening to the audio version of Wil Wheaton’s Still Just a Geek. I am so glad we decided to get the audio as it’s been done a such a genius way! He tells his story in such a way you feel like he’s sat in the room having a chat with you and you get details that are not in the book

Wil wrote his book Just a Geek in 2004, however reading back through it felt that some of the content needed readdressing so reannotated his book into what is now ‘Still Just a Geek’.

In my opinion having the audiobook allows you to have a closer connection to the story and not just understand but feel the trauma and emotions that would have been felt at the time of the original posts.

It is quite honestly the most heartfelt, honest recount of autobiography I have ever read or listened to. Wil apologises for his actions and words said back in his teens/ early adulthood in the hundreds! I found myself shouting at my Alexa ‘It’s you that’s owed the apology’ so many times!

You do not need to be a Star Trek fan to enjoy this book/audio or indeed know who Wil is to enjoy the story. Obviously being a fan and knowing of his work will help you understand the many jokes told throughout but it is most definitely not essential.

For me as a Trek and Wil fan it left me feeling empowered because of the blunt honesty conversations about struggling with mental health and family/work conflicts. I have nothing but the upmost respect for Wil for what he has been through and being so brave to share it with the world.

Give it a read or a listen I most highly recommend! Thank you for a most enjoyable 20+ hours!