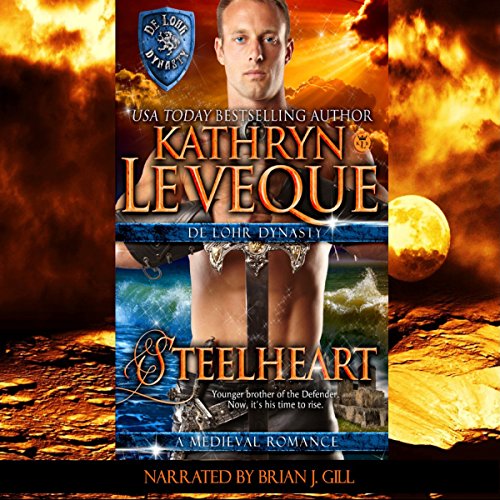 1192 AD - David de Lohr, the younger brother of the great Christopher de Lohr (Rise of the Defender), is a man who has lived his entire life in his prestigious older brother's shadow. While his brother was nicknamed "The Lion's Claw" as the right hand of Richard the Lionheart, David was nicknamed "The Lion Cub" because of his youth.

But David is a force to be reckoned with. Lightning-fast with a sword, he is a knight of the highest order and worthy of his own great legacy. And so, the story of David de Lohr, the knight with the heart of steel, begins.

Frustrated that he is living in the shadow of his older brother, politics and personal differences with his brother see David strike out on his own, finding his way in a world wrought with danger. At a grand feast given at Windsor Castle, David meets the daughter of the Earl of Canterbury. Emilie de Nerra Hampton is a lovely slip of a woman with flashing blue eyes and hair the color of spun gold. David is smitten with her but he's not the only one. He has competition, a man from another very fine house, the legendary House of Hage, the ancient rulers of the Southern Mercia.

Separated from his brother, and pursuing Emilie, David uncovers a plot that could destroy the entire kingdom, including his brother. He finds himself forming a strange alliance with the House of Hage in order to uncover the plot and stop it before it's too late, but his distraction with Emilie and her rambunctious sisters prove to be a great distraction. It's politics, mystery, passion, and chaos for David and Emilie as they try to find their way in a world that would see the two lovers torn apart.

What listeners say about Steelheart

very good as usual but there is lots from the previous book , but enjoyed

After listening to the first book about Christopher David’s brother I had high hope for David’s story only to find it was pretty much a repeat of the same story. David’s life could’ve been woven in to the one book. Also in Christopher’s story the Prince escaped but the Sheriff was killed by Chris. In David’s story the Sheriff escaped with the Prince. There was one other discrepancy but it’s not coming to me.

This is filled with so much emotion that I cried, laughed and everything in between. I love Kathryn Le Veque. What a brain that woman has. So well written. The Narriator did a great job with the exception of a couple of places that were repeated. It did not take away from the story.

Boring. Nearly a carbon copy of the first book in the series. There are whole chapters that were the first book verbatim. Had to fast forward many times to stay awake.

Disappointing. This book was a repeat of the Rise of the Defender word for word.

Seeing same time, through a different set of eyes

This is David de Lohr and Emilie's story.
Although there is some overlap between the previous episode, this is, for the majority, from David's perspective, where he meets and falls for Emilie, the Earl of Canterbury's first daughter.
It is a tale of loyalty, love and the passionate feelings of those that endure through very difficult times, and come out stronger.

This book was half written. half of the story came from the previous novel in the De Lohr series and the other half was actually written. im so disappointed that the author could not take the time to develp the characters more and instead relied on half of the story coming from another book. i had to fast forward so many parts bc I'd alread heaed them. Bad, Bad author. Very lazy indeed.

I do not like to leave bad reviews & choose my purchases very carefully. I have been a fan of Kathryn Leveque's medieval tales since I first discovered her writings. My enjoyment has doubled by acquiring many on Audible. The narrator did a fine job with the material, sadly that could not compensate for the poor story. I felt it was more a recap of Christopher's story, than one devoted to David. It was a struggle to become involved & immersed as usually happens with this author's tales.

l love the story. l love the narrator. But the production quality suffered some, to my thinking. Some moments were almost lost due to not being loud enough.