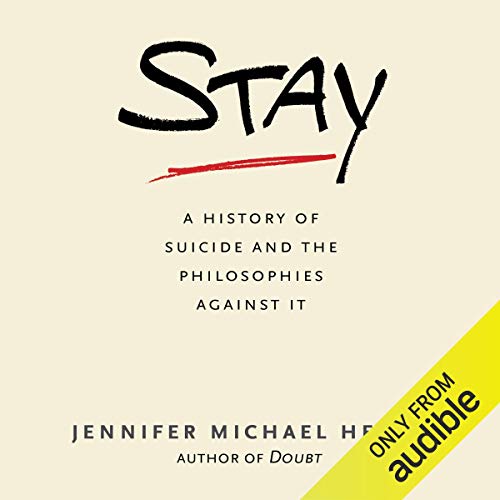 Worldwide, more people die by suicide than by murder, and many more are left behind to grieve. Despite distressing statistics that show suicide rates rising, the subject, long a taboo, is infrequently talked about. In this sweeping intellectual and cultural history, poet and historian Jennifer Michael Hecht channels her grief for two friends lost to suicide into a search for history’s most persuasive arguments against the irretrievable act, arguments she hopes to bring back into public consciousness.

From the Stoics and the Bible to Dante, Shakespeare, Wittgenstein, and such 20th-century writers as John Berryman, Hecht recasts the narrative of our “secular age” in new terms. She shows how religious prohibitions against self-killing were replaced by the Enlightenment’s insistence on the rights of the individual, even when those rights had troubling applications. This transition, she movingly argues, resulted in a profound cultural and moral loss: the loss of shared, secular, logical arguments against suicide. By examining how people in other times have found powerful reasons to stay alive when suicide seems a tempting choice, she makes a persuasive intellectual and moral case against suicide.

What listeners say about Stay

Very compelling and thoughtful book. Wide sources and well constructed. Recommended for any lovers of philosophy or the human condition ! Loved it.

One of the best books I've read. very moving. It was one of those books that you don't want to put down. Very enjoyable. Thanks

Interesting but not compelling

Fantastic narration by the author.

I was expecting the book to be solely an argument against suicide. However, the focus is more about the history of philosophers' arguments against suicide (which seems obvious now, looking at the. subtitle of the book). It's fine if that's what you're looking for, but I found that the book focused a little too much on the history without bringing these arguments together in a satisfactorily coherent and compelling way. I also couldn't figure out why the book was structured in the way it was - initially the chapters were in chronological order of the history of philosophy in suicide, but this changed later on.

In order to be most effective, I think the book would need to be more concise and place more emphasis on modern research on suicide contagion. This was the most compelling point for me, but received surprisingly little focus compared to the writings of ancient philosophers.

I return to this book again and again

Whenever I'm struggling, I come back to this book. There is always something new in it that strikes me, and gives me something to hold onto moving forward.

In the introduction to Stay, the author notes that she has lost several close friends and fellow writers to suicide. She then argues why we have an obligation to stay. Powerful stuff. What follows after though is an oddly dispassionate and encyclopedic progression through historical justifications for and mostly against suicide. Some of this is interesting from a philosophical and sociological perspective but neither is it necessarily very persuasive. What seemed lacking, given the intro and the author's firm belief that we owe it to ourselves and others to live, is that she fails to engage the reader at an emotional level by bringing in any contemporary or personal connections. Still, I would say that Stay is a worthwhile read but more for those with an interest in the evolution of western society's mores toward it than a book that will convince anyone to come down from the ledge.

What about Jennifer Michael Hecht’s performance did you like?

What made the experience of listening to Stay the most enjoyable?

At first I was fearful of getting this book from fear of it coming from a dark place than could be mood altering. That was not the case. The narrator voice is a pleasure to hear and yet captures the intensity that's needed for the subject manner.

What other book might you compare Stay to and why?

None I've had before.

Have you listened to any of Jennifer Michael Hecht’s other performances before? How does this one compare?

No I have not.

I didn't but it raised my awareness of an epidemic that I was completely unaware of.

No matter how determined you are to live until a greater being takes us away it is important to get this useful info that could possible help someone else's life. Provides a chronological picture of the evolution of suicide.

Definitely a must read for everyone.

Anyone who has lost some one or thought about suicide should really read this book.

Lots of info, life saving even

Very well researched and well done. Can get boring at times and tends to repeat. However is worth the listen especially if you find yourself in the position of champion of life. Good secular argument for staying alive.

A rational look at the philosophy of suicide, statistics; a well spoken, articulate, wise, and generous book for those who have contemplated suicide or have known someone who has committed suicide. This is not a sappy self-help book, but a philosophical survey and a brilliant, articulate plea for understanding the arguments--beautifully read by the author. I didn't think anyone could make me change my mind about this controversial topic, but Hecht's put a few holes in my thinking. This is an impressive and necessary work. There's nothing else like it out there.

Informative, useful for a depressive with a philosophical bent, but dry with a boring narration.

A compassionate secular view on suicide and a heart moving invitation to stay alive. I surely recommend it!

What would have made Stay better?

The narration is absolutely terrible in my opinion. She delivers the lines without any emotion or deflection in tone, leaving it very dry and dispassionate. I honestly became more depressed by listening to this book as the delivery is that melancholy.

What was most disappointing about Jennifer Michael Hecht’s story?

I was also let down by the story. As I was expecting a full spectrum history on suicide, it is more solely focused on BC and early AD times with the respective philosophers and religions of that era. Unfortunately, very little is left to describe any modern day history. Point being, other than a history lesson, the author provides no substance to help you understand the reasons behind modern day suicide.

I would say the best parts of the book are the beginning, and towards the end. The prequel provides the authors reason for writing the book which is heartfelt and passionate, helping you to identify with the story. Towards the end, the author offers some interesting statistics, not just standard numbers, but the actual effect that happens to those left behind after suicide.

I would not recommend this book.

My only quibble was that her prosody was irritating. As she reads, Hecht’s pitch and tone falls more often than not and I found myself wishing for a different reader. I suspect that she was reading as if she had written poetry and was fighting a tendency to raise the pitch and tone at the end of sentences and over corrected. I would listen to it again if it were read by a different narrator.