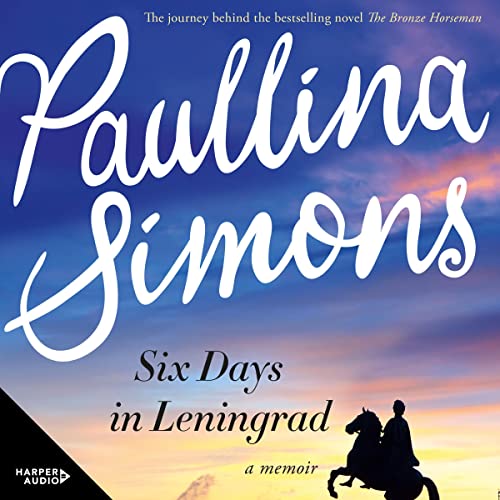 The never-before-told story of the journey behind The Bronze Horseman, now in audio for the first time.

From the author of the celebrated, internationally best-selling The Bronze Horseman saga comes a glimpse into the private life of its much loved creator and the real story behind the epic novels. Paullina Simons gives us a work of nonfiction as captivating and heartwrenching as the lives of Tatiana and Alexander.

Only a few chapters into writing her first story set in Russia, her mother country, Paullina Simons traveled to Leningrad (now St. Petersburg) with her beloved Papa. What began as a research trip turned into six days that forever changed her life, the course of her family, and the novel that became The Bronze Horseman. After a quarter-century away from her native land, Paullina and her father found a world trapped in yesteryear, with crumbling stucco buildings, entire families living in seven-square-meter communal apartments, and barren fields bombed so badly that nothing would grow there even 50 years later. And yet there were the spectacular white nights, the warm hospitality of family friends, and, of course, the pelmeni and caviar.

At times poignant, at times inspiring and funny, this is both a fascinating glimpse into the inspiration behind the epic saga and a touching story of a family's history, a father and a daughter, and the fate of a nation.

What listeners say about Six Days in Leningrad

This is what every fam of the bronze horseman series needs. As if the magic of Tatiana and Alexander weren’t enough, Paulina gives us first hand insight on why this series is more magical and close to her heart than we could ever have imagined. Thank you. I treasure your experience and the new outlook you have given me.

Paulina Simons is Russian to the core of her heart. And she is American, Six Days in Leningrad is her moving story of leaving her Texas home, husband, children and life to travel to Leningrad and meet up with her father for only six days, to research the places of her childhood for her book, The Bronze Horseman. But what awaited her was much less research, and much more an immersion of emotion so intense that those six days became a lifetime of memories, conflict, guilt, thanksgiving, sadness, appreciation and self-reflection.

The people, the places, the events of the book, her family’s experience, her father’s heart, the war, the poverty, the joys, the food,, and even the smells, toilets and all, will also creep into you, the reader, and, perhaps tug and your own life and heart as few reads/listens can.

It took me a bit to accustom myself to the author’s narration, because her New York accent was so present. But as the story and her deep feeling began to take over, I accepted that I wouldn’t have been able to understand Russian.

Please carve out some undisturbed listening or reading time to allow the full impact of her return to a Russian experience to experience it, yourself, in a small, but powerful way. Let it move you.