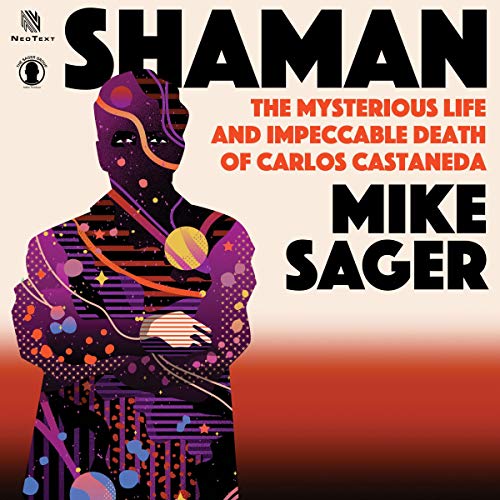 By: Mike Sager
Narrated by: George Orlando
Try for £0.00

Some say he was a breakthrough academic and visionary shaman. Others say he was a sham. Either way, Carlos Castaneda shaped a generation of mystical thinkers and magic mushroom eaters.

In 1968, at the height of the psychedelic age, Castaneda published The Teachings of Don Juan: A Yaqui Way of Knowledge, the first of 12 books describing his apprenticeship to an Indian shaman, and his journeys to the “separate reality” of the sorcerers’ worlds.

Like Herman Hesse’s Steppenwolf and Aldous Huxley’s The Doors of Perception, The Teachings of Don Juan and its sequels became essential reading for legions of truth seekers. Castaneda himself became a cult figure — seldom seen, nearly mythological, a cross between Timothy Leary and L. Ron Hubbard: a short, dapper, Buddha-with-an-attitude who likened his own appearance to that of a “Mexican bellhop”.

Though Castaneda had more than 10 million books in print in 17 languages, he lived in wily anonymity for nearly 30 years, doing his best, in his own words, to become “as inaccessible as possible”. Most people figured he had a house somewhere in the Sonoran Desert, where he’d studied with his own teacher, a leathery old Indian brujo named Don Juan Matus.

In truth, Castaneda lived and wrote for most of that time in Westwood Village, a neighborhood of students and professors in Los Angeles, not far from UCLA and Beverly Hills. Upon his death in 1998, things became even murkier.

The audio version of the year-long investigation into the mysterious life and impeccable death of Carlos Castaneda, as told by his wife, his adopted son, his mistresses, and his followers.

What listeners say about Shaman

Weird, a bit pointless and quite fun

Not a lot to be said about what not a lot is known. I listened to this purely because of how fascinating I found Carlos Castaneda to be. Having read some of his work and having found it incredibly compelling and then finding out that he had made it all up I wanted to see whether there was more to be known. I mean clearly his work could not have come from a complete layman. Shaman sets it all out, but contains little which cannot be found with a quick Internet search. Personally, I have made the decision to remain grateful to the magic contained in Castaneda's work without allowing myself to become enraptured. An enigma built on fibs. There is wisdom there, but also plenty of falsehood...

Nothing to read here

Nothing to read and or learn here. Pointless and left me thinking what was this for?

I grew up hearing about Carlos Castaneda and the Teachings of Don Juan. Now that I've listened to this incredible story, I am sure Carlos had a huge impact on my father, who in many ways reminded me of him. and, in a roundabout way, influenced me!
a story doesn't have to be true to make its mark.