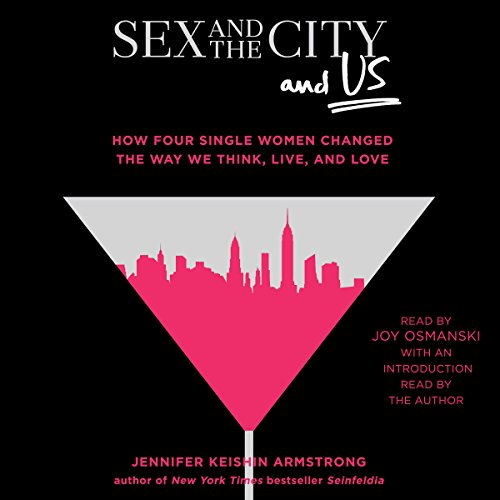 Sex and the City and Us

By: Jennifer Keishin Armstrong
Narrated by: Joy Osmanski
Try for £0.00

By the bestselling author of Seinfeldia, a fascinating retrospective of the iconic and award-winning television series, Sex and the City, to coincide with the show’s 20th anniversary.

When Candace Bushnell started writing her Sex and the City column for the New York Observer, she didn't think anyone beyond the Upper East Side would care about her adventures among the Hamptons-hopping media elite. But her struggles with singlehood struck a chord, making her a citywide - and soon nationwide - sensation.

Beverly Hills, 90210 creator Darren Star brought Bushnell’s vision to an even wider audience when he adapted the column for an HBO series. His four main characters: Carrie, Charlotte, Miranda, and Samantha, forever branded the actresses that took on the roles, redefined women's relationship to sex, and elevated the perception of singlehood. With their fashion-forward lifestyle, they launched a barrage of trends, from fabric flower accessories to Manolo Blahnik shoes to Cosmopolitan cocktails.

Sex and the City and Us is the story of how a columnist, two gay men - Darren Star and fellow executive producer Michael Patrick King - and a writers' room full of women used their own poignant, hilarious, and humiliating stories to launch a cultural phenomenon, pushing the boundaries of television and ignited a national conversation about single women and sex in the process. While the show’s feminist merits continue to fuel debate, it taught viewers - male and female, gay and straight - about sex, and demonstrated that single women could support each other through life’s tribulations, even as men came and went.

Featuring exclusive new interviews with the cast and writers, including star Sarah Jessica Parker, creator Darren Star, executive producer Michael Patrick King, and author Candace Bushnell, Sex and the City and Us brings us behind-the-scenes for a nostalgic look at a TV series that changed the way women everywhere see themselves.

What listeners say about Sex and the City and Us

Loved it - but the sample has a different voice

I really loved this book. As a big SATC fan, it was everything I would have hoped for; it validated every thought I've had about the cultural significance of SATC, and justified why it shouldn't be dismissed as 'chick-flick' series. It's definitely worth purchasing if you're also a superfan of the show, but it's probably worth noting that the voice in the sample audio isn't the voice of the majority of the audiobook, just the introduction read by the author. (The content in the sample also isn't really what the majority of the text is like as the actual bulk of the book is a lot more objective information, rather than the author's personal narrative.) The actual voice is a little more monotone but I quickly got used to it and ended up liking it a lot by the end.