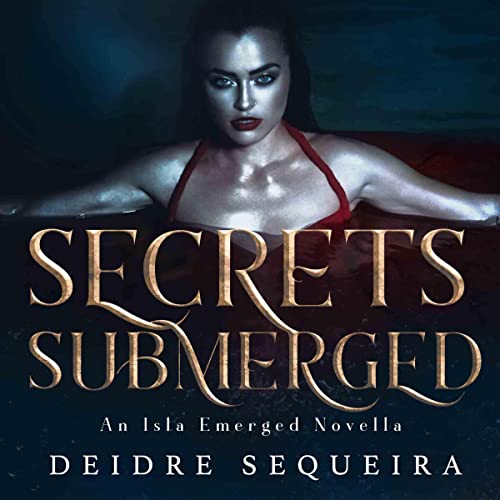 By: Deidre Sequeira
Narrated by: Talon David
Try for £0.00

Eleven months ago, Isla became the matriarch of her merfolk kingdom. Unfortunately, transitioning from being an exiled princess to being a queen is tougher than she anticipated. Isla is haunted by the trauma her mistakes have left behind, the sacrifice her father made, and the glimpse Anita gave her at a secret that had been buried for nearly 30 years. Only Anita and the secret she holds close to her heart can give Isla any measure of closure and make the road ahead clearer for Isla to grow as Queen. But, much like the young mermaid, Anita is wracked by guilt because of her past complacency, the lies she believed, and the damage that was done. Do they dare risk their friendship—and Isla’s fragile sanity—by exposing a truth that could change everything?

This novella bridges the gap between the series' first book, Isla Emerged, and the full length sequel.

What listeners say about Secrets Submerged

A great story. The 3 characters were interesting, and flowed well. It was an intriguing plot, and moving. I will look for some more by this author, and this series.

This Novel is Very well Done

This short Novel continues where book 1 left off in Isla's books. I love getting the background story about Anita and her time with Kaya. There was so much love and respect between the two woman human and Mermaid. Once again the Narrator did a splendid job with Characters voices and the Storyline. looking forward to the next Audible book.

Great story that shows what happened before from the previous book. Narrator does a great job.

You did it once again!!

Absolutely floored to have yet another wonderful book, amazingly written. Characters you love to hate, others you hate to love, and a plot that just shows the past can help with the future! I am absolutely in awe, and I couldn't stop listening to this book, I shall have to wait until I can get the next one as well! I'm excited to see more of Isla, and everyone else, and where the next book will take us!

okay this pretty good. Good back story about her mom and lady. I actually liked it very much. was a bit sad but it was good.

The author does a great job with character development and world building.  The narrator did a fantastic job with the differentiation and acting skills.

Great Narration to a Wonderful Story

I am really enjoying my re-read of the Isla Emerged Series, even more so since I am listening to them. I can't say enough how wonderful this narrator is. I seriously love when a favorite series is even better the next time around.

Throwback Review (6/12/2020): Anita played a huge part in the take down of The Order. Who is she though and why was she willing to help Isla, a mermaid? How is it that she knew Eira, Isla's mother? It's time for her story.

This is why I love Novellas. Insight into other characters is something I crave when the main story captivates me. Learning who Anita was and became was heartbreaking at times and inspiring at others. She befriends her "enemy" and learns that everything she knew about merfolk was a lie. For her to see the wrong in what The Order does and realize she needed to change is inspiring. Change from within is powerful.

For Isla..she gets to know a little of her mother's story and finds the peace she craves which only strengthens her resolve to be a good ruler. She is more her mother's child than she believed.

This is in the novella category (being a shorter read) but it in no way is it less enjoyable than the first book. I love that this picks up pretty quickly where the first book left off. We get to see a new side of Isla and then we get to explore some of her family's past. It really was a great story and I am truly looking forward to the next book.

Parents- PG13 good for middle grade readers to adults
Language- not a lot, much less then Harry Potter and no f-bombs
Violence- normal to genre, violent murders but nothing too graphic
Sexual Content- it's really pretty clean other then a few alluded to discussions.

The narrator did a fantastic job with the differentiation and acting skills. I did like it better at 1.2x speed but I do tend to listen to many books a bit faster.

—I was given this free review copy audiobook at my request and have voluntarily left this review.

A great novella book to go with the book! I loved this one just as much. The story was awesome and the narrator did a wonderful job.

THIS STORY IS CLEAN, FUN AND NOT FILLED WITH ROMANCE! THE NARRATOR IS DYNAMIC. AND I CANNOT WAIT FOR MORE!

STORY IS REALLY WELL WRITTEN AND EASY TO FOLLOW.

STORY HAS THE FEEL OF A PRE-QUIL WHILE IT COMPLETES BOOK 1 WELL.

ACCEPTABLE FOR TEENS AUDIENCES AND OLDER.