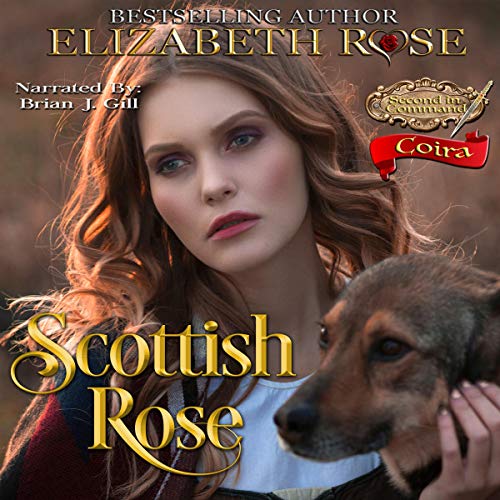 Coira MacDuff has lived a hard life. Once a prisoner of the English and held captive in a hanging cage, she is hesitant to marry an Englishman. Still, she does so for alliance purposes. But never does she expect to be brought back to Liddel Castle, the place that still haunts her dreams.

Sir Lance de Selby manages to secure a border castle to impress his new Scottish bride. However, the girl seems spooked and wants nothing more than to flee and go back to Scotland. All his attempts to make her accept him as her husband have failed.

Will past memories haunt a new marriage? Or will a love between enemies turn nightmares into bliss?

Loved every minute of it. This is the 2nd book of Second in Command, but I listened to it before Summers story the 2nd book of Seasons of Fortitude. As I am listening to them according to the year the story starts at. The next I am going to listen to is Tristan which is from the new series as it is a follow up of Pirate in the Mist. Then I will listen to Summers story next. The narrator is very good. This book is definitely worth a credit, as well as all the others before it.

This story is beautiful. Coira eventually finds love. She had such A hard childhood. Her parents were both dead and she had been raised by her sister and some gypsy people who had helped in the lives of the sisters. Coira had been kidnapped and imprisoned in a cage on the outside walls of a castle.. Then her sister who had come to help her, ended up in the next cage to her. They were eventually freed. By the mad men Mackeef who they were friends with. Now in this book Coira was married and was taken back to the Castle and she was terrified.
Her husband’s awful Uncle arrived and caused lots of problems. Coira and her ladies maid ended up in the cages again. Coira saw how the Uncle treated her husband so she threw her dagger at him and killed him. The narration of this book was fantastic and Miss Rose has blessed us with this book, the story is beautiful.

Elizabeth has a plan to make us smile with her stories. She did just that!
Brian has a lovely accent. He is a wonderful narrator for her Scottish tales.

Another 5 star romance for Ms Rose

Elizabeth Rose thank you for another great book!

Cora and Lance an English Knight marry to help
an alliance! Little did Lance know that his Scottish
Rose had been held prisoner in his castle!
Get ready for betrayal, love and family!

Enemies to lovers. This story is full of betrayal and love, distrust and romance. Another entrancing book by Ms Rose!

Lance and Coira (Effies sister from bk2 Madman Mackeefe series)
I enjoyed reading/listening to this captivating marriage fir alliance romance story that is well written with wonderful characters. Their story has a loving HEA!.
Narrated by Brian J Gill who did a wonderful job of telling the story!

Coira is a good story

I enjoyed it a lot.
a beautiful and sexy hero make a story you won't want to turn off.
the problems that they gave will keep you listening.
Brian J. Gill is good as the narrator.

this was my first audible. It was a good listen. recomend this audible to friends