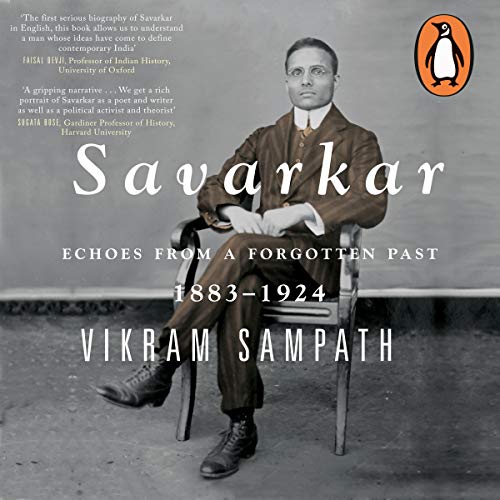 Savarkar: Echoes of a Forgotton Past, Vol. 1: Part 1

By: Vikram Sampath
Narrated by: Pratik Sharma
Try for £0.00

As the intellectual fountainhead of the ideology of Hindutva, which is in political ascendancy in India today, Vinayak Damodar Savarkar is undoubtedly one of the most contentious political thinkers and leaders of the 20th century.

Accounts of his eventful and stormy life have oscillated from eulogizing hagiographies to disparaging demonization. The truth, as always, lies somewhere in between and has unfortunately never been brought to light. Savarkar and his ideology stood as one of the strongest and most virulent opponents of Gandhi, his pacifist philosophy, and the Indian National Congress.

An alleged atheist and a staunch rationalist who opposed orthodox Hindu beliefs, encouraged inter-caste marriage and dining, and dismissed cow worship as mere superstition, Savarkar was, arguably, the most vocal political voice for the Hindu community through the entire course of India's freedom struggle. From the heady days of revolution and generating international support for the cause of India's freedom as a law student in London, Savarkar found himself arrested, unfairly tried for sedition, transported and incarcerated at the Cellular Jail, in the Andamans, for more than a decade, where he underwent unimaginable torture.

From being an optimistic advocate of Hindu-Muslim unity in his treatise on the 1857 War of Independence, what was it that transformed him in the Cellular Jail to a proponent of "Hindutva", which viewed Muslims with suspicion?

Drawing from a vast range of original archival documents across India and abroad, this biography in two parts - the first focusing on the years leading up to his incarceration and eventual release from the Kalapani - puts Savarkar, his life, and his philosophy in a new perspective and looks at the man with all his achievements and failings.

"Vikram Sampath has written the finest biography.... This will restore the right balance to the story of one of the revolutionaries of modern India." (Meghnad Desai, eminent author and columnist, professor emeritus at the London School of Economics)

"Vikram's writing skills and his penchant for description, especially of the inhuman torture that the prisoners had to undergo...make the text both heart-wrenching as also very readable." (Tathagata Roy, governor of Meghalaya)

What listeners say about Savarkar: Echoes of a Forgotton Past, Vol. 1: Part 1

It’s such ha shame that such a good book is read by someone whose diction and pronunciation of Marathi English and French were terrible.

One hopes that the part 2 has a better story teller

This book captures the early life of Savarkar until he is transported to Andaman for solitary confinement. It’s written in a biographical style with plenty of facts. But it nonetheless breaks the heart of the true patriots. A country that forgets its martyrs is bound to pay a high price for its freedom.

Takes me to that time

So much sacrifice so much love for the nation. How lucky we are to have had such great men born in our country . Book was very gripping and I just could not stop listening . Very impressive and the performances by narrater were excellent . Can’t wait to get hold of the second part.

Swatantrya Veer Savarkar is undoubtedly one of the tallest, and arguably the most maligned, sons of India. For a long, long time his true life story not only remained unknown to the masses but was deliberately twisted for cynical, narrow-minded interests. The young and brilliant Dr. Sampath deserves the kudos for bringing the real life of the protagonist in front of the world via this lucid and authentic Savarkar biography. Dr. Sampath's copious and meticulous research is evident in the minutest and little-known details covered throughout the work. The gravity of his efforts to research and get all the facts straight can only be appreciated when you factor the 3 monumental challenges in this specific subject matter:
1. Savarkar's very active, turbulent political and personal life spans ~7 decades, 3 continents, and countless events and personalities with its lasting effects on the Indian subcontinent.
2. Equally active and nefarious natures of his adversaries — first, the colonial masters and then his domestic political opponents and the successive early governments of the very nation he gave up everything to serve!
3. And, finally, and partly because of the two above, his own very secretive and covert modus operandi.

Equally crucial and praiseworthy is the author's painstaking effort to stay neutral while caricaturing this stellar and rational, but extremely polarizing, personality that adorned the Indian freedom struggle and political stage for over half a century. This by itself is an extremely difficult task given the pulls in either direction, and Dr. Sampath has done an excellent job in achieving the necessary balance.

At the same time, I'd be remiss if I didn’t mention my extreme disappointment with the audio version of the book. It's pathetic in both, the narrator's abilities as well as editorial checks and quality. The narrator, Pratik Sharma, has done an allaround dismal job in bringing this work to the Audible audience in its innate glory. Here's why I say this:

1. There are innumerable unnecessary, jarring pauses mid-sentence that bewilder the listener. It gives me a sense that Mr. Sharma was either unsure of what follows: the terms, words, pronunciations, context, etc.; or, simply, needed to take a breather. Either way, a sensible editorial quality check would have led to re-recording of the portion before publishing it.

2. On the other hand, right pauses are conspicuously missing where needed — where a reader actually truly expects and needs one. For example, once the a chapter ends and a new one begins. But, in those cases, the narrator just ploughs through without even a semblance of a break leading to a pathetic experience. Mr. Sharma's voice and style also comes across as fake, overly dramatic, and worst, full of errors (See 3 below).

3. Finally, and perhaps most importantly, the narrator seems to have taken ZERO effort in learning the even basic pronunciations of Marathi words, surnames, names of the places, etc. What makes it almost insulting to the protagonist and the readers is the fact that Savarkar also happens to be one of the greatest Marathi litterateurs; and, Mr. Sharma butchers parts of his Marathi poetry, paragraphs, and quotations throughout his reading without any qualms.

This book starts in late 19th century, and is replete with references going back to the 17th century Maharashtra, its history, Marathi language, people, and most importantly, Savarkar's very own monumental literature in Marathi. Given all this, why fluency in Marathi wasn’t the most basic criterion for narrator selection is beyond me. It is also shocking how Dr. Sampath allowed this narration to be published in this form — provided, of course, he had the awareness of and any control over it. I'd really like to understand what Audible process to select a narrator is. Quite frankly, I cannot imagine the repercussions of selecting an Audible narrator for, say, a Charles de Gaulle biography who has no knowledge of basic French! So, to me, it's as much an Audible quality check failure as it is Mr. Sharma's personal illpreparedness.

So, overall, a stellar literary work ruined by jarring, error-filled auditory experience is my vote.

Since the book is based on Marathi personality it would have been just to the language to have native speaker. Lot of butchery of Marathi words through out distracting the listener from the story.

Vikram Sampaath is masterful in his curation of the history of one of India’s foremost freedom fighters.

My only peeve is around the incorrect pronunciations of the names of some of Savarkar’s Indian contemporaries. The narrator seems to have taken the effort on the right pronunciations of French characters. I wish the same was done some of the Indian last names like Patankar and Karve that are incorrectly pronounced throughout the narration.

Enjoyed Vikram Sampath’s vol 1 part 1. Looking forward to part 2. Wish narrator had spent some time with a Marathi speaker to understand pronunciations, but otherwise has done excellent job too.

This book is what you need to read to know about the great Savarkar. The narration though is butchered when it comes to Marathi words.

the British went beyond all forms of savagery and barbarity. I hope they rot in hell

A book that will make you cry..

Do read, this book will make you cry..

Beware! This book will awaken you.

Engaging, dense and moving literary work about Indias biggest intellectual giant in last 100yrs. Must read for whoever considers history as their interest.