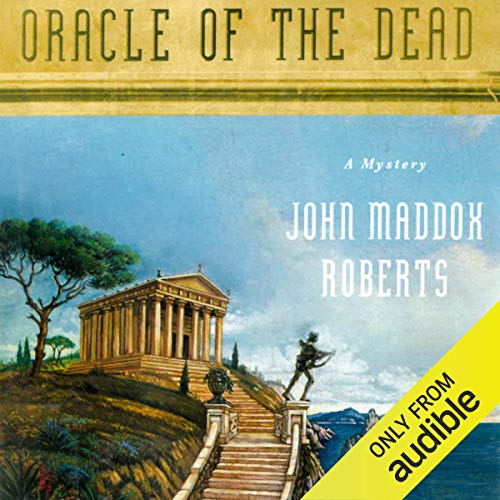 SPQR XII: Oracle of the Dead

Decius Caecilius Metellus, this year's magistrate for cases involving foreigners, is living the good life in southern Italy, happy to be away from Rome, a city suffering war jitters over Caesar's impending actions. He thinks he is merely visiting one of the local sights when he takes a party to visit the Oracle of the Dead, a pre-Roman cult site located at the end of a tunnel dug beneath a temple of Apollo. He quickly learns that there is a bitter rivalry between the priests of Apollo and those of Hecate, who guard the oracle.

When the priests of Apollo are all killed, the countryside looks to explode in violence as Greeks, Romans, and native Italians of several conquered nations bring out old enmities. Decius is caught squarely in the middle, desperate to find a way out that will pacify the district and, incidentally, save his own skin.

What listeners say about SPQR XII: Oracle of the Dead

"Laugh at me would they? We'll see about that."

I would recommend this book to anyone who enjoys unusual murder mysteries, historical fiction and/or has any interest in the lives and society of Ancient Rome. It is full of interesting little tidbits about beliefs and customs at the end of the Republic and the characterisations, especially that of Decius himself, are excellent.

Which character – as performed by John Lee – was your favourite?

John Lee is the voice of Decius Caecillius Metellus, the somewhat self indulgent, superior but humerous Praetor still travelling in southern Italy who is the teller of this story. And Lee fulfills this role to perfection.

The intriguing deaths of the priests of Apollo - not only who did it but also how was it done? - combined with the fascinating insights into the Roman provincial lifestyles had me hanging on every word, resentful when I had to turn off my listening device.

This series is almost at an end and I have enjoyed it immensely. John Lee has, for me, become Metellus the younger, married to a niece of Julius Caesar, as he rises through the ranks of Roman society at the end of the Republican era, solving mysteries along the way. I will miss my adventures with him and the dazzling mental pictures of Ancient Rome and it's life, good and bad, which were so vividly conjured up by John Maddox Roberts. I wish that the eBooks were also available with Amazon.co.uk

I have read a lot of history and biographies about Ancient Rome. And as a result I like this mystery genre. The book is well written with lists of little historical factoids to pique my interest. The plot is well made and it comes to a satisfying conclusion.

And of course, John Lee as narrator cannot be surpasses.

So I highly recommend this book - my first in the series, although I did not feel I had missed anything by not starting with the first volume in the series.

Very well done. I'd listen to anything by this narrator. He really pulls you in.

Full of twists and turns. Ending not obvious. As always wonderfully evocative of Ancient Rome.

another really enjoyable tale. not as much fighting action in this one but still engaging and a captivating read. solid ending as always!

More Confusing Than the Rest

This book was more convoluted and complicated than the rest in the series. Still good info on Rome and its surrounding provinces. But the legal mystery was a bit confusing to follow. The narration was superb as usual.

This is one of my favorites of the series

This is an awesome book set in campania. I love the characters and the humor. The narration is superb