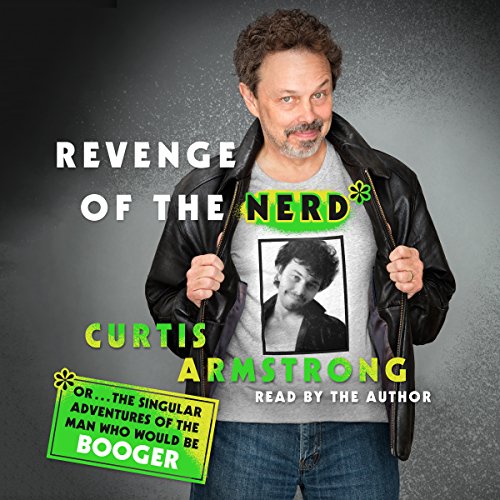 Revenge of the Nerd

This audiobook is read by the author.

Risky Business. Revenge of the Nerds. Better Off Dead. Moonlighting. Supernatural. American Dad. New Girl. What do all of these movies and television shows have in common?

A legendary comedic second banana to a litany of major stars, Curtis is forever cemented in the public imagination as Booger from Revenge of the Nerds. A classically trained actor, Curtis began his incredible 40-year career onstage but progressed rapidly to film and television. He was typecast early, and it proved to be the best thing that could have happened.

But there's more to Curtis' story than that.

Born and bred a nerd, he spent his early years between Detroit, a city so nerdy that the word was coined there in 1951, and, improbably, Geneva, Switzerland. His adolescence and early adulthood were spent primarily between the covers of a book and indulging his nerdy obsessions. It was only when he found his true calling, as an actor and unintentional nerd icon, that he found true happiness. With whip-smart, self-effacing humor, Armstrong takes us on a most unlikely journey - one nerd's hilarious, often touching rise to the middle. He started his life as an outcast and matured into...well, an older, slightly paunchier, hopefully wiser outcast.

In Hollywood, as in life, that counts as winning the game.

What listeners say about Revenge of the Nerd

Fantastic to have this memoir narrated by the author. Entertaining, intelligent, highly enjoyable and most definitely recommended!!

Revenge of the Nerd - not bad, could be better

Mr. Armstrong’s memoir is like a mass produced light beer, if you’re really looking for something to quench your thirst, I guess it’s not too bad, but it’s not particularly satisfying, especially in a world jam-packed with better offerings. In the first part of the book, Curtis describes his formidable years at a level of detail that is just too much; you may discover a level of boredom that borders on painful. Not a lot happens and you get to hear all about it. But do not abandon hope, because the second half of the book is a vast improvement over the first. You’ll know things have taken a turn for the better when he starts dishing the dirt on Tom Cruise and detailing his experiences on the set of Risky Business. The remainder of the book has lots of insights into the back door deals and shiny/smarmy environment that pretty much defines Hollywood. The nerd portions of the book seem pretty compartmentalized, For example, either he is a nerd, like in the Revenge of the Nerds chapter, or he isn’t, like when he discusses Moonlighting. There isn’t a lot of overlap. But overall, all of the dialog about show business is enjoyable.

The only time I rolled my eyes or felt some embarrassment is when Curtis discussed politics. There were multiple times he referred to himself as a feminist; it was like he was saying, “Look, I am one of the good ones!” This is especially poignant and sad when you consider the sycophantic climate that defines the current entertainment community. He, like so many others, was silent when terrible things were happening. He also beats up on a few show business individuals strictly based on their political leanings, which, in all honesty, seems to go against the whole nerd ideology, which adamantly rejects censuring and castigating someone based on who they are or what they believe. But, between these pages, you’ll see that he does just that.

Anyway, if you are a nerd, child of the 80’s, a fan of Supernatural, or you just love B-movie actors (I count myself as all of these things) and you are looking for something to occupy 10+ hours, you could do worse, but you could probably do better too.

If you could sum up Revenge of the Nerd in three words, what would they be?

Thorough coverage of a solid career

Curtis is sharp, articulate and I really enjoyed the book.

I suppose I'm like a great majority of folks that chose this book to listen to in that I was (and am) a big fan of Revenge of the Nerds and Better off dead. I was pleasantly surprised to learn that Curtis was a formally trained actor who came up through the theater. The stories of his youth and the details provided about each of the movies and tv appearances he was in were so interesting! Though I don't share his political viewpoints, I thought he presented them thoughtfully - for the most part. I've listened to a number of biographies and autobiographies on Audible, and so far, this falls in my top 3.

Curtis Armstrong has been one of my favorite actors since I first saw him as Booger. The writing is incredible, stories riveting and performance just perfect.

As an adult whose childhood was spent in the 70s and 80s I loved hearing about Armstrong's recollections of some of the most loved movies and tv shows of my childhood. Admittedly when I used to think of Armstrong, I only recalled "Booger" from Revenge of the Nerds...and had little memory of him in Moonlighting or Risky Business or even now-classic 80s fare Better off Dead and One Crazy Summer. Nope. He has always been "Booger." Even while binge-watching Supernatural, "hey! That's Booger as Metatron!" So finding out Curtis Armstrong is a classically trained stage actor was quite an eye-opener, but really, not a shock. Armstrong's precise articulation has always been one of his trademarks in my mind. I found this book by way of another audiobook narrated by him (Wild and Crazy Guys), and fell in love with his articulate, natural narration, and perfectly delivered funny lines. After that was finished, I looked up more books narrated by him and chose this as my next purchase. Worth every cent. He is smart, self-deprecating, witty, humble; he spills some tea without really lambasting anyone. I mean, he does call some actors and actresses out for their (some quite infamous) behavior, but somehow manages to be decent about it. As if he, we...the whole world...can just accept they were jerks, so lets get on with the story. This book prompted me to go out and watch some of his movies again, and this time I have watched them with newfound admiration. Well done Mr. Armstrong on your first writing foray. Looking forward to that PG Wodehouse expose and will definitely listen to pretty much any book he chooses to narrate. Nerds of the world, unite.

Booger, pro-abortion yet adores his daughter

Struggled with his leftist ideology in story. Met 2nd wife at Abortion rally. Funny book but over-shadowed by hypocrisy. Proud of drug use on Rev of Nerds shoot and other ventures. Took swipe a Director who was pro-Reagan on "Better off Dead"

I really enjoyed this book, It was a good story on Curtis and his adventures in life and really enjoyed the journey of his career with all films we love and candid moments. great listen for all Curtis Armstrong fans !

Curtis is amazing. I cried I laughed. I’ve watched him since I was a kid and his book is well written and wonderful. The audio of him reading his book himself is untouchable. Nerd for life. Thank you Curtis.

A strong passion for the theater. I was unaware. great job Curt!! much Love pal

Who is Booger? DeMarr? Viola? Metatron?....more importantly, who is Curtis Armstrong? A Wonderful journey on a long and storied career. Anecdotes about Cruise, Moore, Holland, Franklin, Cusack, Pinchot, and more. Well worth the read and a HUGE insight into the world of a working actor.

If there is only one criticism, it's that actors often wrote for people in the industry dropping a lot of names that appear once and are never said again, that show up like names in an Academy Award acceptance speech.

Regardless, it's a charming retrospective on a great career from a seasoned professional ... and nerd.