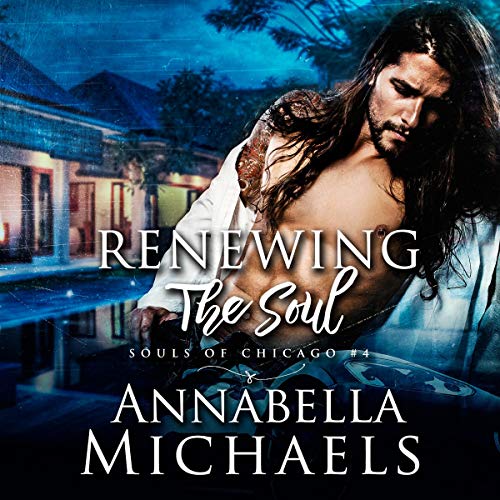 By: Annabella Michaels
Narrated by: Michael Pauley
Try for £0.00

Rocko earned and loved his reputation as the wild child of the rock band, Carter’s Creed. His bandmates dubbed him Animal, not only for his skills on the drums, but because he was always looking for the next thrill. Sex, drugs, and rock and roll were what he lived for. That was until one night when his wild ways nearly cost him his life.

As the owner of Golden Entertainment Studios, Lachlan Edwards had a vested interest in his newest clients, the members of the band, Carter’s Creed. He wasn’t surprised when they quickly rose to the top of the music charts, given their talent, but he was concerned with how their drummer, Rocko, seemed to be spiraling out of control. When Rocko seemingly hits rock bottom, Lachlan decides to step in and offer him a chance to recover.

Will Rocko accept Lachlan’s offer even if it means facing the past he’s tried so hard to run away from, or will it all prove to be too much and send him spinning out of control once again?

What listeners say about Renewing the Soul

Micheal Pauley did an amazing job as with this one. This series is one of my favourites and listening to the come to life is truly amazing and I cant wait for the next one.

This series just seems to get better as we go through it! Renewing the Soul focuses on Rocko who has always been the life of the party but came too close to the end and, after going through rehab, has been welcomed into the home of Lachlan, the owner of the music company Carter's Creed works for.
There is a lot to unpack for Rocko/Riley throughout the whole of this book as someone who deals with and recovers from addiction has many steps to work through. It's an emotional read in several places but has a lot of positivity when it comes to building a relationship with Lachlan. Lachlan is from a very different world to Rocko but there are a couple of occasions where they can commiserate with certain feelings or situations. It's kind of a slow burner as Lachlan is so respectful of Rocko and what he's going through. I really felt connected to these characters right from the start and was invested in the outcome, not just romantically but for Rocko to work his way back to being healthy and present in his life.
As ever, Michael Pauley does full justice to the story and characters of Renewing the Soul. He gives so much emotion where needed, for both men, but also there's heat and love, kindness and anger. Such range from a brilliant narrator. My one little critique, as someone living in England is his pronunciation of potatoes, I actually had to laugh when I heard it :-)
A definite recommended listen, to this book and the whole series. There are a couple of points that follow on throughout the series but otherwise I would say it can be read/heard as a standalone.

When I read this novel, I fell so hard for both Riley, aka Rocko and Lachlan, and this version only reminded me of how much I loved their story. The pain that Rocko weathers as he struggles to come clean, both physically and emotionally, is palpable and I feel for him as he figures out who he wants to be and how he wants to be with Lachlan. And Lachlan's acceptance of his growing feelings for Rocko is endearing. Watching these men fall for each other, dance around each other and fight against their feelings before finally caving in to them, despite the hurdles they must overcome, is still sweet to me. The performance was okay. Lachlan's English accent wasn't as well executed as I had expected it to be. And as I've found with this actor, his narration is sometimes too breathy and uncertain, The way his intonation too often doesn't manage to make sentences sound like they're complete is disconcerting to me every time, and takes away from the performance.

I love this series!! We need more Souls of Chicago on Audible!! Pretty please! :)

Loved It A Lot

I loved how it ended and can't wait to see what happens with Riley and Lachlan. I can't wait for the next book Morgan and Akio hoping it will be out on audible soon.

The Souls of Chicago series has action, romance, drama, and sweetness, but the books don’t shy away from angst. Renewing the Soul has angst in spades, but it’s also a book of hope and second chances. Writing about drug and alcohol addictions are not an easy feat, but Annabella Michaels takes care to really show the complexities and difficulties that surround addiction. Watching these two broken men heal and support each other was beautiful, and their romance was not only romantic, but extremely fulfilling to read about.

The audiobook was narrated by Michael Pauley who was the perfect choice for such a complex and sensitive subject. He embodied Rocko and Lachlan and brought them to life with care and tenderness, but also with intensity and confidence. The performance was spectacular.

Overall Rating: 5 Stars. The writing style of the book was lovely, and I loved how much care Annabella Michaels put into developing these characters. I was rooting for Lachlan and Rocko as they fell in love and rebuilt their lives with each other.

Once again the combination of Ms. Michaels writing and Michael Pauley’s narration has made this book come alive. This book was my favorite of the whole series. I loved it!

I really enjoyed reading this book and was so excited when it was finally released on audio. In this story we have Rocko and Lachlan. Rocko is the drummer for the band that is under contract to Lachlan’s entertainment company. The huge success of the band has come at a price for Rocko. His downward spiral of abusing alcohol and drugs almost killed him. Rocko commits to rehab to regain control of his life and not lose the best gig he’s ever had. As Rocko’s boss, Lachlan only wants to help Rocko re-acclimate to the world outside of rehab and rejoin the band. Lachlan has Rocko move in with him to continue his recovery. As Rocko’s recovery continues, he and Lachlan become closer. Have they found their soulmate? Will Rocko stay sober and not lose his role with the band? Will they have lots of sexy times? Well, you will have to listen to the book to find out.
The narrator for this series is Michael Pauley, who I just love. He does wonderful accents, especially his British accent for Lachlan – possibly swoon worthy 😊 Michael has this uncanny ability to draw you into the book and immerse you in the story. When listening to him, he fleshes out the story and doesn’t make you feel like he is just reading the words off the page. He brings it all to life.
Another five-star story and reading. Looking forward to the next one coming out on audio.

Amidst all the pain, you can find love....

Rocko has been in a never-ending party with booze and drugs for a long time. To keep the demons away, he felt he had to drink and drugged himself away. At the point of being kicked out of the band, he had to sober up and earn his friends’ and Lachlan’s trust again.

Lachlan is one of the richest man Rocko has ever met, and ever since meeting the members of the band, especially Rocko, he has felt this pull and attraction to the “bad boy” of the famous rock band.

Michael Pauley has done justice in voicing the different characters in the story, I love how Lachlan sounds, even the vulnerability of Rocko/Riley sounds sweet and adorable, and how Benjamin sounds so stuffy. Listening to a story in audio is a totally different experience, and I am loving it, Michael Pauley has made this story come alive with the different voices he used for each character. Congratulations Michael Pauley and Annabella Michaels! ⭐️⭐️⭐️⭐️⭐️

I loved listening to Michael Pauley bring Rocko and Lachlan to life so beautifully! This story is full of emotion and recovery and healing, and Michael does a fantastic job of conveying the emotions and feelings of each character. I quite enjoyed the evolution of Rocko and Lachlan’s relationship over the course of the book, though it isn’t easy for them. They truly have to work for their HEA, but the journey is well worth it. Definitely recommend both the story and audio, and the rest of the series too!

I've been loving the Souls of Chicago series and they just seem to pack that much more of an emotional punch in audio. Michael Pauley did an amazing job bringing Annabella's words to life. Rocco/Riley really pulled at my hear strings. He was such a lost soul, never feeling like he was good enough for anyone. Lachlan was just as much a lost soul with his own damaged heart from his loss of family. What I loved most about Lachlan was his dedication to everyone in his life. He truly put everyone before him. But, most of all I loved his honesty to Riley about his feelings, especially when he told him he loved him. He owned it, and went with it, and it was everything to Riley. Riley never having anyone tell him they loved him had me reaching for the tissues and pulling over from a case of the feels. This book pulled a lot of emotions out of me, and is another amazing story in the Souls of Chicago series.

As a side note, I couldn't help put love the mention of the groups and the photos! Haha!

This is the story that when I just reading was waiting for. I just wanted Rocko happy ending and Lachlan is just perfect for him. So if I love reading this story then listening to Michael Pauley is just absolutely perfection. Michael Pauley just pulls me in and I just can't stop listening. Love this so much!