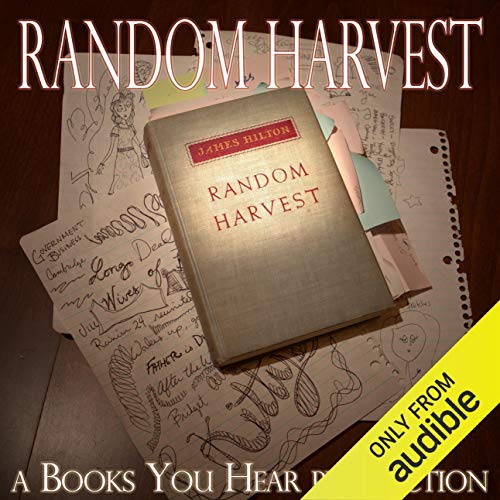 Books You Hear is genuinely proud to present Random Harvest by James Hilton. Though this story may be new to the post-WWII generations, it has an impressive history, making it, perhaps, the greatest story you’ve never heard of.

Published in 1941, Random Harvest was contemporary to its first audience, and is painted against the backdrop of the gathering storm in Europe. However, it doesn’t focus on military threats or political wrangling. Instead, it tells the very accessible story of a profoundly good man with normal aspirations who consistently put the needs of others first, and as a result, lived a life he never could have imagined.

In 1942, a feature film was made that significantly altered the narrative (and narrator) of this original story. It was also excellent and was nominated for the Best Picture Oscar. Ironically, it lost out to a film also written by James Hilton, and with the same lead actress, Greer Garson. However, in later years, it was Random Harvest that both Garson and her co-star, Ronald Colman recognized as the project in their careers that they most enjoyed.

The story is told in five parts, with each representing a significant period in the main character’s life - encompassing war, power, prestige, high finance, show business, and of course, deep and romantic love. Since the film focuses primarily on the love story, there is much that makes the book a new and deeply satisfying experience. And for those who haven’t seen the film yet, experience the book first. You will love the way Hilton educates and envelops you with this beautiful story, and leaves you so much better, and happier, for the journey.

What listeners say about Random Harvest

Wonderful book but the reading let it down

This is a wonderful book but the reading lets it down woefully. Americans tyring to sound English is just sad.

I'm on the look out for another audio edition, because the book is one of the all-time-greats.

It's a good story but I can't help thinking that it would have been so much better if Jeremy Irons had read it.

incredibly subtle and mesmerising, is there any s

Loved the story. Incredibly evocative of the time and perfect descriptions. Absolutely loved it. What spoiled it was the narration. The actors are clearly Americans putting on English upper class accents and there are so many mistakes. Surely there are English speaking actors available?

An all time classic !

After 75 years this is still a marvellous book - well worth the read - highly recommended !!

The story"s very good, and the narrator is fine, but it's slightly spoiled by the actors voicing the main parts. The female voices are particularly charmless and obviously American impersonations of an English accent

I had only ever watched the film, which I have always loved and wouldn’t tire of. To listen to the book then was quite interesting, to see the extent to which Hollywood had changed it.
I found myself getting irritated with Charles. He came across as a bit of a wimp. I also chuckled at the affected accents of the readers and found myself (a good Northern lass) attempting to take them off as I progressed on my daily walk (hoping no one would hear me) …. But it was still a weepy in the end and I did enjoy the performance …. It also made me look up James Hilton, only to discover that he was born in Lancashire too :-) … well worth the listen … Done Lost Horizon …. Goodbye Mr
Chips next I suppose :-)!

I first read this book as a pre-teen, and so much of it has stayed with me for over forty years...except for the title and the author! Recently, I finally got serious with Google, and was able to finally read it again here on Audible. How delightful to find that it was every bit as wonderful as I remembered, and to enjoy it in a very different way as an adult. If the violence and cruelty in so much of modern media has begun to weary you, this book might provide a respite.

My first James Hilton novel that I have read and thoroughly enjoyed.

The book is a beautifully structured story switching between first person and third, to tell the story of a WW1 shell shock victim who loses his memory (twice) and struggles to care about a world full of people who understand even less than he does. The way his life, and losses, are revealed is masterful and the author captures emotion in the most unsentimental yet effective ways. I guarantee the last page twist will make you bite back the tears.

It was a perfectly wonderful book! Since it was written in a different time..it takes you to another time another world

Much more than the Movie!

Loved this book. It was great to see all the fill in and back story, beyond the classic film. #Nostalgic #Tearjerker #UnlikelyHero #tagsgiving #sweepstakes

If you have not seen the movie, read the book first. The movie has been one of my favorites for years but the book tells the story in a completely different sequence and of course, is more in depth. Although the narration is great, I didn't think I was going to like it until about midway through and then I was hooked.. a great mystery and story.

James Holton makes you feel like a part of the story. He was a fabulous writer

Great listening to a great story. Wonderfully done. Locking forward to enjoying more like this.

What an amazing book!! I have recommended to everyone I can think of who loves historical fiction along with intrigue.

Slow, but it ends up paying off in the end

I enjoyed this. Halfway through listening I dubbed this book “one of the most slow/ boring books I’ve ever read.” It ended up redeeming itself by the ends I will think of it often, I believe…. Wondering how the characters fared after the end scene.

It did go on way too long (I felt) in places with the “gory details” of the family business and the stock market. Which wasn’t necessary to understand that Charles was taking over the family business. I listened to this book which is slower than reading it and you can’t skim past dull parts you think don’t love the story along.

There were other parts towards the end I felt the same but don’t want to give away the story. I felt the author didn’t develop a key relationship/ moment in time and instead talked about the politics of England before and after the war, etc

But overall. I really liked this story!

stands the test of time

I loved every minute of this amazing story. I highly recommend you read this. I listened to it while I did my work but I wish now I would of read it. However, the narrators were amazing.