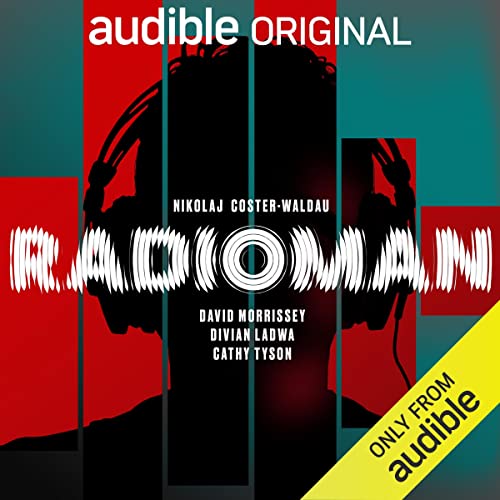 What listeners say about Radioman

Acting great but personally I found it hard to follow and somewhat confused at the end caused by the way it’s dramatised rather than written.

This podcast is addictive!

Becoming an expert of Northern accents!

Great podcast beautifully written by Joe Derrick! Brilliant alternation between the investigation line and personal storylines.
The original story was already great to start with but I also think all the subplots created keep the narration even more appealing and reletable to everyone. All the family dynamics are so on point and add to the story a pleasant genuineness.

Also, the atmoshpere of the place? Wow, it’s so tangible, the writing combined with the audio effects created such an intriguing world.
Two words about the Audio editing, sounds are crazy, so vivid and evocative. I suggest you to listen to it with headphones!
The cast is amazing, Nikolaj in particular! The performances are raw and intense!
Great job!

Kept me guessing until the end

Loved it. What you wish Radio 4 was doing. Intelligent, well-performed drama with a great, easily differentiated voice cast.

So incredibly well put together, it's literally like you're listening to a film. It keeps you guessing right up to the end and I don't think I've ever been more invested in a story. You can tell how much time and thought has gone into every aspect of this series, from the writing to the soundtrack and beyond and it makes for thoroughly immersive listening. And of course, its wonderful to hear Northern England as the centrepiece for the story. Excellent work by all involved!

I absolutely love this podcast, the story is exciting and interesting. I wish there were more episodes of this story or that there will be more podcast stories from Nikolaj and the team at Ill Kippers Productions.

Kinda of guessed it from the start, but had to keep going…..fab fab fab performances, Mr Coster-Waldau and Mr Morrissey..Just Yummy. Listened non stop for two days. Well done Joe Derrick and the rest of cast, TOPS!!

this is an excellent detector mystery book. well acted/read. loved the changing voices through out the story,.Was very suspendful loved to hear another

Whilst i thought the acting and production was excellent i cant help feeling that i have missed something in the story, because for the life of me i cannot work out what the old man, the cloud and the code were meant to signify because without them you basically did not need the entire last episode. Also some of the things that were put in the story, some might call them red herrings but i would call them fillers. Lets face it it was quite obvious who we were meant to believe was the killer so to me there were no twists, so as i said, is it me?...

Fabulous, like an insanely well made Radio 4 play on acid! Brilliant script, acting and sound design. This is the best audio film out there. Immerse yourself.

The story was something you'd expect from an amateur creative writing club. The only thing that takes it up a notch is the acting, but the actual story was boring, predictable and cringe.

This 10-part story had me guessing the whole time. I had an idea of who I thought it was and I was totally surprised when the culprit was someone else. Thinking back on it, the signs were there - which helps make it a clever mystery - but I went in knowing nothing about the real horror Radioman was based on. I listened as a fan of Nikolaj Coster-Waldau, not because I like crime stories! All the actors did a stellar job. I really felt for the sympathetic characters, really disliked the less friendly ones and was upset about the injustices that befell so many. The original soundtrack for the scenes fit well. I was impressed with the sound editing! I thought the family history of the wife was unnecessary, though, and didn't understand who the homeless man was and why he was used the way he was. He interacted with more than one person so if he is supposed to be imaginary, his presence didn't make sense to me. (Apologies for being cryptic - I AM trying not to spoil it!) Some of the ways certain parts were introduced were kind of clumsy, but most unfolded at just the right times to maximize big reveals., Overall Radioman is compelling and thought-provoking, as enjoyable as a murder mystery podcast could be!

Great story! Hard to follow at times - Background music congestion, noises, weaknesses in marration at times. Still, medium-to-fast paced story that improved with each episode, winding up in a shocking conclusion!

Worth hearing, in my opinion!

So good!! What a terrific cast, kept me guessing right to the end. Nikolaj Costner-Waldau is a treat.
More like this, please.

An original take on a well-established trope. The voice acting was really good! The story was interesting and kept you guessing.