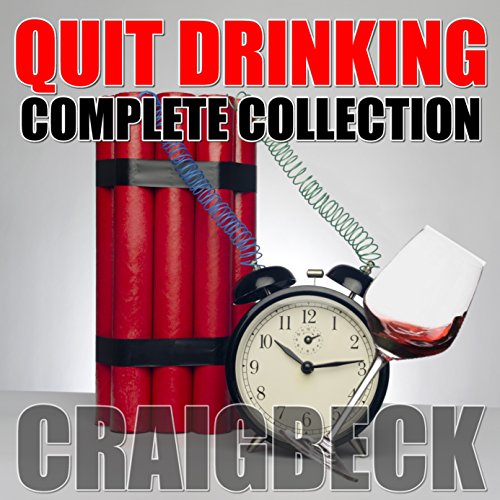 Alcohol Lied to Me

Craig Beck was a successful and functioning professional man in spite of a two-bottles-of-wine-a-night drinking habit. For 20 years he struggled with a drinking problem, all the time refusing to label himself an alcoholic because he did not think he met the stereotypical image that the word portrayed.

In this audiobook, he will lead you through the same amazing process he used. You can stop drinking today.... No need to declare yourself an alcoholic. No group meetings or expensive rehab. No humiliation, no pain, and no willpower required.

Alcohol Lied to Me has already helped thousands of people to escape from alcohol addiction. Newly updated, this third edition of the audiobook includes two new chapters.

Alcohol is a drug that has achieved the ultimate illusion. It has managed to convince the Western world that it isn't a drug at all but rather a harmless social pleasantry. A product that does none of the things that the marketing promises that it does and yet remains unchallenged for such false advertising.

Alcohol Lied to Me Again

Alcohol is the most devious and deceptive drug on planet Earth, and occasionally people fall back under its spell. This journey backward virtually always starts with the same sentence being uttered: "Surely just one drink won't hurt".

Just one drink...it seems such an innocuous action that it couldn't possibly cause any substantial drama. In reality it is the same hoping to take just one little step off a cliff. It's only one seemingly insignificant step, but the consequences are rapid, irreversible, and severe. Both events start off an unstoppable series of events.

That’s it for me!

I purchased this box set as I had decided to stop drinking for a number of reasons. Firstly my Mother passed away from cancer in September 2019 and my consumption of alcohol had increased dramatically over the last eighteen months since she was diagnosed. I had a constant aching below my stomach, my liver was not happy I presumed and a feeling of sadness and anxiety for no apparent reason, this had been going on for many many years, I am 54 and have been a regular drinker from my teenage years. I had already stopped drinking when I purchased this box set but I was struggling badly. Listening to these books explained the reasons I was feeling bad and also that things would get better, I now haven’t had a drink for over a month, I am taking the supplements that Craig recommended, I am now feeling better physically and mentally, the aching below my stomach is gone and I am happy for the first time in years. I would recommend this box set if you want to change your life and see alcohol in all its true light, thank you Craig. Regards Rob.

saved my family from my problem.

For the past 10 years my drinking habit has been getting worse especially in the last year. No longer was it was a social pleasantry but instead a lonely experience binging on neat spirits to get through the day. Enough was enough and funnily enough I had been targeted by Alcohol lied to you adverts on YouTube....

I finally had enough got the audioble subscription on downloaded the book. I have not had a drink since listening. Craig Becks work really is that powerful. If you have a drinking problem and you want to stop then this is a must have!

Simple as this
You know you want this devils drink out your life....ergo I say listen to this again and again.
Its 100% possible to stop... simple as that.

I would like to thank Craig Beck.. sincerely... I was at the end of the line.. my drinking had destroyed, relationships, my health and my mental health.. I was searching the Internet in a last ditched attempt at stopping drinking yet again.. and there he was.. Craig Beck.. I started the book with the usual scepticism.. but this quickly passed!! His approach is totally refreshing, he doesn't pull any punches and that's exactly what I needed!! Also the advice on supplements is great.. I have followed it to the letter and feel great.. life is good without the "attractively packaged poison" I see booze for what it is now.. I thank you Craig..x

Too dogmatic for me...

I abandoned this after a few hours, as I really didn’t like it. The tone was heavy, preachy and rather patronising. I also felt he concentrated too much on his own story. For something more informative, positive and encouraging on this subject I’d recommend The Naked Mind by Annie Grace.

good narrator, not much for me though

I think this would be good if you hadn't given much thought to your alcohol use or if you need convincing that alcohol is bad for you. wished there had been more content or direction to content that helped with stubborn behaviour patterns eg more hypnosis sessions

Down to earth practical advice on how and why to stop drinking without all the guilt and shame of AA.

Easy listening and engaging. Written from an experienced perspective, Craig hits on many things that are familiar to my struggle and so makes the book relatable.

I have taken useful tips and would recommend.

I've been listening to this whilst I try sleep at night, when I've fallen asleep I've left it on and hopefully taken it in. But I've got it to keep going back to to listen to and cant wait to try the supplements, I CAN do this!!!!!!!!
Thank you Craig you are a life saver.

I was a heavy drinker for over 20 years.

I didn't think I'd ever stop drinking. the last three years were very blurry.... drinking every day alone just kinda happened. If you searched for a way to cut down, quit or question if you are a problem drinker, then give this audio book a try. I've been alcohol free for 160 days. I have a new life.

A must read- life and game changer

This book ripped the lid off the alcohol myths I learned and believed. I now have the knowledge, the desire and the belief I can quit for good. Thank you!

I haven't read a lot of books about drinking. I enjoyed this series, found it helpful and somewhat entertaining

I loved it. The information about the supplements is widely overlooked by most and rarely addressed by AA.

opened my eyes... "once I was blind now I can see"

I never looked at my drinking problem the way this book explained..

this is the truth thank you

Listening to Craig tell his story, Is like listening to a good friend. We can all relate to what he is saying. It feels like he is in your corner, letting you know that he Knows how you feel and he’s not giving up on you. This book has given me confidence to continue my journey living alcohol free. Anytime I feel my mind is trying to trick me again I have this book in my tool box of resources that will help me get through that craving. The concepts in this book are truly life-changing.

Would you consider the audio edition of Quit Drinking Complete Collection: Stop Drinking Expert Box Set to be better than the print version?

I HAVE GONE BACK TO THESE BOOKS OVER AND OVER JUST TO KEEP ME IN FOCUS AND AWAY FROM PROBLEMS. THANK YOU CRAIG

What does Craig Beck bring to the story that you wouldn’t experience if you just read the book?

SOMETIMES I JUST NEED A QUICK FEW LINES FROM THESE BOOKS TO HELP ME OUT.

I felt as though for three books there were a lot of repeat information. Not a lot new from one Book to the next.

Finally a way out of the loop of addiction. Written very well with superb analogies. Highly recommend this to everyone! Wow have we been brainwashed. Thank you Mr. Beck 🙏☺️