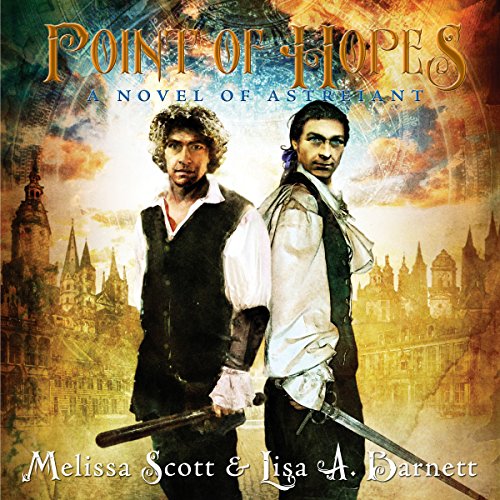 By: Melissa Scott,Lisa A. Barnett
Narrated by: Matt Leisy
Try for £0.00

Nicolas Rathe is a pointsman, a dedicated watchman in the great city of Astreiant. During the annual trade fair, with a city filled with travelers and merchants, someone is stealing children. The populace is getting angry and frightened and convinced that a foreigner must be to blame. Rathe calls on the aid of both an out-of-work soldier, the handsome Philip Eslingen, and the necromancer Istre b'Estorr.

The art of astrology is a very real power in the kingdom and plays as much a role in politics as greed and intrigue. Rathe finds himself struggling to find the children before a major astrological event brings about catastrophe.

The first in a series of fantasy novels filled with adventure, intrigue, and gay romance.

"Set in an alternative Middle Ages...this novel offers intriguing looks at guild interrelationships, the uses of hand-cranked printing presses and medieval attitudes toward magic. It also offers considerable delight to those who enjoy intellectual puzzles of the fantastic kind." ( Publishers Weekly)

What listeners say about Point of Hopes

I listened to this by way of rereading the series and it was very enjoyable. The story is fairly intricate and the worldbuilding rich and promising, but the budding friendship/romance between Rathe and Eslingen is terrific, cautious and intelligent just like them. The narrator is excellent, the only issue with the audiobook is some editing/tech problems where a few lines get repeated but it's not so bad.

Interesting world building and a long and complex police procedural mystery. The prose is clear and effective and the storytelling fairly engaging throughout.

The narration is pleasant and appropriate (and Leisy, God bless him, can perform female characters as human beings - not something one can count on with male narrators, sadly) although curiously this file contains a lot of errors, where Leisy corrects himself, but the file contains both versions. I didn’t mind it, myself, but in a professional audiobook that should have been fixed in editing before it reached the customer.

The world created by the authors is believable and interesting. The characters are well developed and appealing. I like the minor characters as well as the two mains - A nice feeling of friendships and colleague relationships and caring for others bound up with a complex but well constructed story - I'm a real fan of Melissa Scott's work in general so was very glad to discover this series. The reading is well paced and clear.

Great story but narrator repeats himself!

If you could sum up Point of Hopes in three words, what would they be?

This is a wonderful story but be forewarned. The narration or editing is mediocre. I recommend suffering through the recording or reading the digital version instead so you won't miss the tale. Luckily, the sequels seem to be fine.

The narrator...or an inept editor...kept repeating phrases and sentences. Arrgghh!

Very good story line and characters. There are way too many repeat passages tho. Could really use better editing

3.5 stars due to editing

I found this book under gay fantasy. And while there are some references to same sex couples, and a slight interest brewing toward the end of the book, this is in no way a romance novel. Just FYI. (I do believe the series will lead to a tame romance in future installments).

I really enjoyed the story. It has a lot of politics and is based on an investigation. So, if you don't like these aspects in a book, this one is not for you.

I don't do recaps of stories, but I found this a very nice surprise. I had not heard of this series before, but I have already started 1.5.

The narration was fine, although there wasn't a great deal of differentiation between characters. One issue was that I couldn't tell that I was hearing a female speak unless they were named or their sex was referenced.

My biggest issue was the editing. Lines were consistently repeated throughout the story. This was frustrating, and almost lead to a 3 star review. But, I found the story line to be strong, the world building and characters well developed, and although the plot rambled on at times, it was an enjoyable listen.

This book is a long-time favorite, so I was excited to see the audiobook version. Unfortunately, the production is bad enough that it’s hard to listen to - frequent repeated phrases, and more than a few basic reading errors.

The story is great and he narrator also, but there are many points where the edits were cut with overlapping words and phrases.

Overall this was a wonderful listen of a really good story... The only problem, and it's worth docking 3 stars for, is that the audio editing needs looking at as the narrator REPEATS a fair section of the story; it feels like what has happened is that the narrator has read to a point... possibly ending a recording session, and then restarts the nexxt session by repeating thhe last sentence from the previous recording session... Given this is a $17US audio book I would expect BETTER. I noticed a similar issue with Point of Knives, also narrated by Matt Leisy....
Let's see if third books the charm with Point of Dreams.