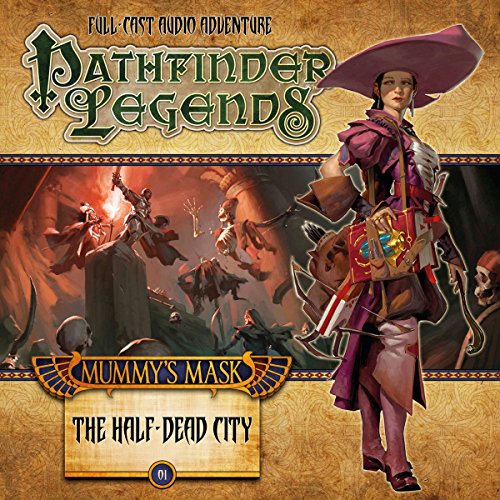 For almost 2,000 years, the tombs of the Necropolis of Wati have remained sealed - until now. Adventurers from all over Golarion have travelled to the ancient city to find lost treasure and uncover the secrets of the past. But some things are best left buried.

As Valeros, Ezren, Harsk and Merisiel face traps, ghosts and undead spirits, sinister forces descend on Wati. The Mask of the Forgotten Pharaoh is about to be discovered - and an ancient evil unleashed.

"As exciting opening chapters go, they don't get much better than The Half-Dead City...the incredible cast have captured the essence of everything that Pathfinder is and have set in motion the beginnings of a true Sword and Sorcery epic." (Tim, Mass Movement)

First this series got my attention as it's about Egypt, a subject I love. It was hard to find all the books and then, even harder had to Google, to get an order for playing. Eventually looked as if this may be the first but don't take my word for it. A shame as the publisher or Audible should do something to give you an indication of the series and the order it should be listened to.

Having said that I thoroughly enjoyed this one. The acting is good, the characters all do their bit and it was like listening to movies along the lines of The Mummy/Scorpion King with elves and dwarves. I just bought the second in the series and if the rest are as good for me as the first I will purchase them all.

They are wonderful to listen to and whilst they may not be everyone's cup of tea, I loved it.

Great cast, however the music is a bit loud. The story feels cut short to make more money.

Loved the voices and how they brought a great fantasy story (and role playing) to life. The characters are well developed, the background music and effects are brilliant, the pace fast, and the story world and plot are rich.