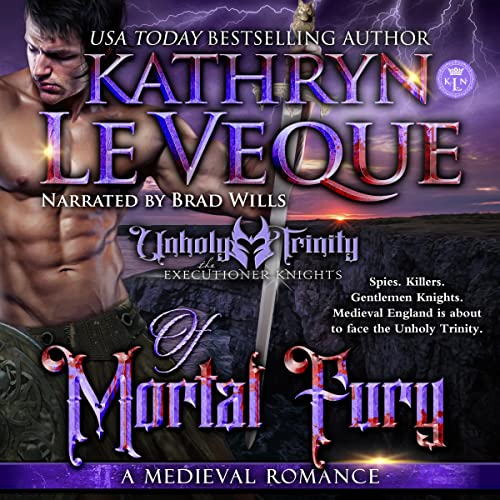 By: Kathryn Le Veque
Narrated by: Brad Wills
Try for £0.00

When Morgan de Wolfe, commander of Richmond Castle, is called by his liege Caius d’Avignon (Winter of Solace) into the full-fledged world of the Executioner Knights to go deep under cover, a de Wolfe becomes a Wolfe in sheep’s clothing for the sake of William Marshal and his spy ring.

Will a de Wolfe be the greatest Executioner Knight of all?

Morgan de Wolfe, cousin to Edward de Wolfe, earl of Wolverhampton (and father of William de Wolfe of The Wolfe), finds himself the perfect man for an Executioner Knight’s job. Assuming the identity of a dead man, he makes his way to the Welsh border to infiltrate his way into a castle stolen by a Marshal enemy. His task is to use the dead man’s identity to reclaim the castle.

What he didn’t count on was a woman who could quite possibly ruin his mission. And possible even his life.

Amarantha de la Haye’s father lay siege to Mount Grace Castle in Yorkshire 20 years earlier in a dispute against William Marshal himself. She has grown up at Mount Grace, an educated and clever young woman who finds herself ruling the house and hold because her father is slipping increasingly into dementia–a rather guarded secret. When a chance meeting with Morgan sees sparks fly between the two of them, she has no idea that she will be the key to Morgan’s mission...and her own destruction.

The Wolfe fangs are sharpening.

Join Morgan and Amarantha on a journey of lies, deceit, betrayal, and ultimately the power of love. Will Morgan obey William Marshal? Or will he obey his heart?

Of Mortal Fury is part of the USA Today best-selling Executioner Knights series.

What listeners say about Of Mortal Fury

Kathryn has given another magical De Wolfe story! She has got gold in her fingers and in plotting these tales.
Brad is a master narrator! His voice can drag me right into it and make me believe I am seeing every scene standing there with every character!!