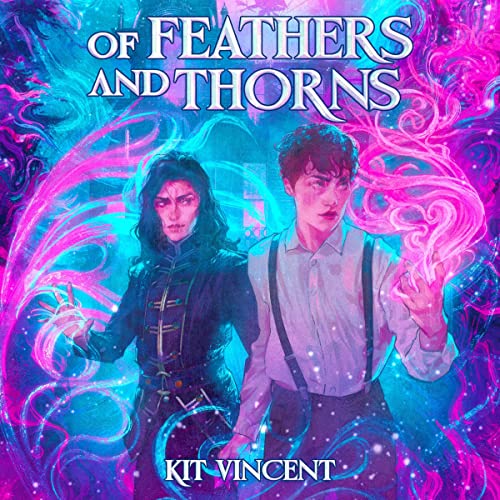 Of Feathers and Thorns

By: Kit Vincent
Narrated by: James Fouhey
Try for £0.00

After manifesting thorned magic and nearly destroying his hometown, Kieren Belltower is summoned to join the Magic Service—an institution in charge of magical affairs—and start an apprenticeship with a high-ranking magician. But instead of the mage assigned to teach him, Kieren is greeted by his haughty and annoyingly handsome senior apprentice Esten, who clearly has more important things to do than chaperone some newbie.

Their teacher has disappeared on a secret assignment, leaving Esten no instructions other than a warning not to trust a soul. But as Kieren's unruly magic proves too dangerous to leave unattended, Esten has no choice but to involve him in the matter. Together they retrace their teacher's last known mission—an investigation into the illegal use of magic and its connection to the devastating phenomenon known as the sludge, which has plagued the country for weeks.

But as Kieren and Esten grow closer, they uncover a plot that thrusts their lives into danger and threatens to shatter everything they know about magic and the world they were born into.

Set in alternative 1900s America, Of Feathers and Thorns is perfect for fans of Carry On and A Marvelous Light.

“Packed with adventure, swoony romance, and of course, magic. This book will enchant you!” (Adriana Mather, NYT best-selling author of How to Hang a Witch)

What listeners say about Of Feathers and Thorns

This is a really well-written, debut novel, hopefully with more to come with the same characters and universe. Once I started listening, I could hardly stop and found myself wanting life not to intrude so much so that I could get back to this story. In fact, listening to it on a long train ride yesterday, I got so engrossed in it that I nearly missed my stop.

By now, I guess you know that I like it. So, where do I start with a review of it? I know that one should never judge a book by its cover, but this one sold it to me. I love the pinks and the blues, and, I have to say, as a gay male, the artwork of both Esten and Kieran, but Kieran sold it for me. It was probably the slightly farm-handish look of him.

The plot is solid, and I couldn't spot any holes in it. A lot happens in a short period of time, but it's not difficult to follow, immersion in the universe was total for me, and the story unfolds itself in a way which is both logical and which still manages to be surprising. In this regard, it reminded me somewhat of Peter S Beagle's "The Last Unicorn", although the stories, settings and style are completely different. This novel stands alone very strongly, in my opinion, but would also be an excellent first novel in a series, and I, personally, would love to see more of these characters and this world.

I love the way that the magic in this world works. Without giving too much away, I really felt the side-effects of thorned magic and its effects on the characters. Some of those brought a tear to my eye, and it really conveys well the dangers of magic, as well as the benefits. I have never come across a magic system quite like it before and found it completely believable and realisitic to the setting.

Kieran's vulnerabilities came across very well, and I could relate to he and Esten's interactions. I couldn't quite work out which of them I liked more and, in the end, I have had to settle for loving the duo. I'm not normally a fan of romances, but I do feel that they have a great future together, even though in some ways they are like chalk and cheese to one another. I'm sort of reminded of Granny Weatherwax and Nanny Ogg from Pratchett's Discworld in that respect: complete opposites in many ways, but they work so well together.

I also like the way that inclusivity is weaved into the narrative. It's subtle and, at the same time, matter-of-fact, and it's good to see a world where, in my opinion, at least, this is represented well. I enjoyed reading about a character with rather literal gender fluidity, one who has aquired a disability, and the general theme of the magic and non-magical worlds existing side-by-side.

For me, though, the real show-stealer of the novel was Ellis Devine. I don't want to spoil others discovering her, but between her and Oi, I got some great laughs.

So, with all this, do I have any criticisms? Only one, really. Becuase the novel is written in the first person, split between two main character's viewpoints, I did find it a little confusing when "jumping between heads" with each chapter. The author seems to have used the character's names as the chapter title to cue the reader into knowing whose head you will be occupying for the chapter, which I think is an elegant solution and I think would work well in print, but with an audiobook (and with my tendency to listen to them on the train), if you miss the chapter title, as I did a couple of times, you may find yourself a bit confused until you work out whose head you are occupying at the moment. This really is a minor criticism on my part; others may have no difficulty with it and, once I realised what what happening, it didn't cause me any major problems. It's just something to be mindful of when you listen to this: keep an ear out for the chapter titles.

Overall, I loved this novel and very much look forward to listening to more stories from this author. They have hooked me in the same way that Harry Potter, Discword and others have: love at first hearing and certainly this is now in my top 10 fantasy reads.

I meant to listen to a bit of this book and wanted to save the rest. I failed. I listened to it from one evening and into the next day. I sampled plenty of fantasy novels and most of the narrators were painfully distracting from the content. James Fouhey delivered the story masterfully. Kit’s writing was approachable while still building a world full of magic. I was rooting for the protagonists and hoping stage antagonists reaped whatever karmic Justice was owed to them—I noticed a lot of parallels between the current climate we live in, but it wasn’t distracting. This has a little bit of everything, and I’d say it’s well worth the read or listen. I’m excited to read more from Kit.

A fun twist on magic, America and the greater world can wait to read more from this author

It's the Riddler all over again.

Like from the lastest Batman movie, this book kind of suffers from the same issue where the "villains" are actually making complete sense but since they are the "Villains" their role in the story can't allow them to be in the right (cause as the villains, we aren't suppose to support or agree with them over the main protagonist ya know!), so instead, the story makes the Villains do the most heinous acts to undermined their (VALID) points.

But the truth is as much as this story tries to convince you that the "villains" were wrong it just feels really forced. It's to the point where I just stopped caring about what happened to either side in the end. At one point, when one of the antagonists points out how they don't get a choice in how they live their lives and are ripped away from their families at children one of the protagonists has the freaking audacity to simplify this as just "well, you shouldn't fight back just because you hate obligation!" as if this "obligation" isn't literally total control over their very lives. Like magicians are despises by the people they are forced to serve and are alone in the world because they were taken from their families....bffr.

Also, the founding magicians were dumb as shit. How tf do escape from one world where humans hate you to a completely new world where you have the power to create your own form of government and even can use magic spells to trick humans into believing whatever narrative you want, but instead of building up a new society run by Magicians where Magic and Magicians are adored by humans, you instead make an almost copy of the same exact world you were forced to escape from because humans hated magic and magicians, but now it's even worse because magicians now are essentially slaves to humans. LIKE BFFR.

Anyway, aside from these points, I would say the story is alright. NOT great. just alright.

Anyway, other than this,