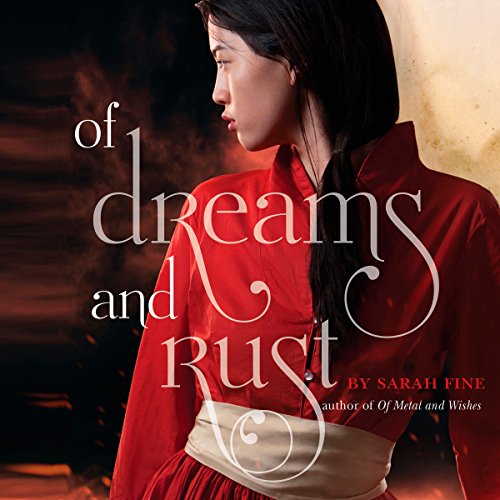 Of Dreams and Rust

By: Sarah Fine
Narrated by: Alexandra Bailey
Try for £0.00

In the year since the collapse of the slaughterhouse where Wen worked as her father’s medical assistant, she’s held all her secrets close. She works in the clinic at the weapons factory and sneaks away to nurse Bo, once the Ghost, now a boy determined to transform himself into a living machine. Their strange, fragile friendship soothes some of the ache of missing Melik, the strong-willed Noor who walked away from Wen all those months ago - but it can’t quell her fears for him.

The Noor are waging a rebellion in the west. When she overhears plans to crush Melik’s people with the powerful war machines created at the factory, Wen makes the painful decision to leave behind all she has known - including Bo - to warn them. But the farther she journeys into the war zone, the more confusing things become. A year of brutality seems to have changed Melik, and Wen has a decision to make about him and his people: How much is she willing to sacrifice to save them from complete annihilation?

What listeners say about Of Dreams and Rust

narrator is great at telling the story. full of action, sorrow, love , hope, and peace. the book is amazing.

Sarah Fine at her best

Of Dreams and Rust is the second part of Sarah Fine marvelous fantasy duology. Fine is an author of considerable experience and strength, who’s proven herself more than capable of executing even the most elaborate plots while paying much attention to the psychological development of her characters. With a PhD in psychology and a Postdoctoral Fellowship at Brown University, Fine puts her extensive knowledge to good use. Her characters are works of art in their own right, with layer upon layer of true personalities and consistencies in their behaviors.


Even such strong characters don’t outshine her plots by much. Of Dreams and Rust brings a rush of excitement in each chapter, a breathless anticipation of things to come. Wen is in constant danger, unsure of her enemies and even more unsure of her friends. She goes through such struggles in this book, challenges much larger than before, and yet she remains strong and brave the entire time.

Wen is truly a heroine one can admire. Although not demonstrative at the best of times, she is still marvelously aware of her emotions and heart. She approaches everything with such calmness and strength and her loyalty and capacity for forgiveness are astounding.

Compared to the previous book, Of Dreams and Rust is much less claustrophobic, both in its setting and the characters. We are introduced to so many places and people and new experiences are offered on every turn. Even though we felt like we knew are main characters, Fine manages to present them all in a new light, revealing slowly the complexities of their personalities and their individual strengths and weaknesses.

As a linguist, I was very intrigued by the Noor language and Fine’s efforts in creating it consistently. The geek in me rejoiced with each new word and the very fact that she paid attention to such details was enough to make me deliriously happy. But that’s nothing new when it comes to Sarah Fine. She is almost unparalleled in her attention to detail and her vivid descriptions. Luckily, she’s also very productive and she doesn’t make us wait very long between books. What could be better than that?