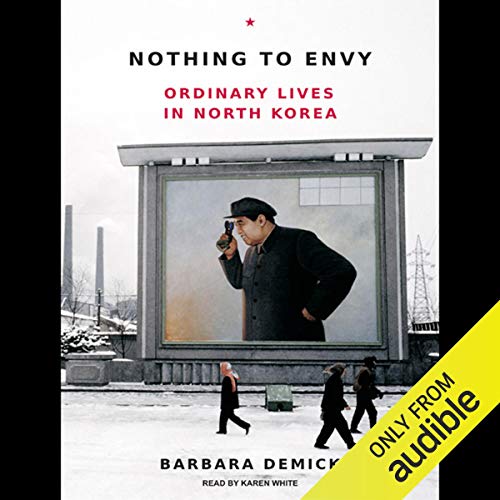 By: Barbara Demick
Narrated by: Karen White
Try for £0.00

Winner of the Samuel Johnson Prize for non-fiction 2010.

Barbara Demick's Nothing to Envy follows the lives of six North Koreans over 15 years - a chaotic period that saw the death of Kim Il-sung and the unchallenged rise to power of his son, Kim Jong-il, and the devastation of a far-ranging famine that killed one-fifth of the population.

Taking us into a landscape never before seen, Demick brings to life what it means to be an average Korean citizen, living under the most repressive totalitarian regime today - an Orwellian world in which radio and television dials are welded to the one government station, a country that is by choice not connected to the Internet, a society in which outward displays of affection are punished, and a police state that rewards informants and where an offhanded remark can send a citizen to the gulag for life. Demick's subjects - a middle-aged party loyalist and her rebellious daughter, an idealistic female doctor, an orphan, and two young lovers - all hail from the same provincial city in the farthest-flung northern reaches of the country. One by one, we witness the moments of revelation, when each realizes that they have been betrayed by the Fatherland and that their suffering is not a global condition but is uniquely theirs.

Nothing to Envy is the first book about North Korea to go deep inside the country, beyond the reach of government censors, and penetrate the mind-set of the average citizen. It is a groundbreaking and essential addition to the literature of totalitarianism.

"Excuse me, but I must insist you listen to this book. This is a mandatory one. It's so well written; beautiful and terribly sad. Demick interviews North Koreans who have escaped and weaves together a narrative that's astonishing. It's the best audiobook I've listened to in the last year." (The Guardian)

What listeners say about Nothing to Envy

I really enjoyed this book- it's well written and the facts and figures were all new to me. I have been to South Korea and was impressed by the attitude of the people there- particularly towards their 'brothers' in the North. many have suffered because of the random decision to draw a line across the country.The journalism is superb - to get such fine and detailed knowledge must have been challenging given the expectations of citizens to inform on each other.
However the narration is dreadful - too fast and monosyllabic - I have found this with several readers just lately and now I am being much more careful to listen to the reader before I purchase as the narrator has a huge impact on both the enjoyment and understanding of the book.

I can't listen to this, I'm 3 chapters in and what ever interest and insight the book contains, it's all drained away by a dispassionate, monotone narrator. I've heard a sat-nav with more emotion in its voice. You have now reached your termination.

North Korea is probably the worlds most closed society, so when I saw this title I was immediately compelled to purchase it as I'd seen so little in the past about the place and its citizens.

This book follows the lives of several North Koreans over the years that eventually led to their defection to South Korea. This is a truly fascinating and often shocking and depressing read at times, but is a real eye-opener to the incredibly hard lives that people have in North Korea. As someone who could only guess at the living conditions in North Korea, even I was shocked to read about the often deeply ingrained level of brain washing the population at large received about the outside world. Despite the primitive conditions, people actually believed that their country was the best there was and that they had nothing to envy of anywhere else.

Particularly during the famine years of the1990's the level of deprivation was truly shocking, but perhaps more shocking was how so many people were accepting of this as the 'norm' and despite hardship and starvation the often unshakable belief that their God-like leader would take care of them. To give you a flavour of how backward the ordinary people were, one person refers to a freezer as a 'North Pole machine' which I thought indicative of how little people had.

Reviews are not my strong suit, but suffice to say that this title is a riveting read and excellently researched and written. It will leave you dumbfounded as to how in the 21st century people are forced to live this way.

Introduction to the last bastion of Communism

I enjoyed this book a lot as I know little about North Korea and It was good to have the human stories explained. It doesn't come to a conclusion but then it never promises to. The writing (reading? listening?) is not excellent but it's pretty good. This book is ideal if you want to learn more about North Korea's history but don't want to have to plough through a history book. It has whetted my appetite to learn more about Korea.

The reader was not very experienced though and made some slip ups.

The destruction of a nation

I thoroughly enjoyed Barbara Demick's book. She gives a history of the deterioration of life in North Korea over the past 20 years by documenting the lives of a number of families and indiviuals. It is extremely informative,interesting, thought-provoking and heartrending. Anyone wanting an insight into life in North Korea will certainly benefit from listening to this.

Great book but shame about the narration 😕

This is a brilliant and interesting book spoilt by the American narration of the author.

I enjoyed discovering the history of North Korea from a more personal perspective. However, the narration was very monotone and almost robotic which I found irritating. It nearly put me off completing it!

I had to clean my house out and wanted to listen to this book whilst I did it, I was so engrossed with it that I was finding excuses to do more cleaning just to get back to the story. It is factually very very interesting and the way you get to know the characters that are being interviewed is the icing on the cake. Best book so far on Audible, 100%.

Rather dull tales of rather extraordinary lives

The real life characters here have experienced a way of life unimaginable to most of us, and went to amazing lengths to escape. And yet I feel the worst of it remains unimaginable, as the author has managed to capture only the boredom and monotony of a rigidly structured & inhibited existence controlled by fear.

Considering how different NK is - not just from the West, but from the rest of the communist world, too - this falls well short of grabbing the attention. There was little literary craft in the writing, there was no narrative arc as you might see in Wild Swans, and there seemed no attempt to place events in a geo-political context.

Perhaps we will only learn the truely facinating detail once the country has begun to open up, as we have with East Germany & China.

Any shortcomings in prose were exacerbated beyond recognition by the narration, apparently by some sort of guileless automaton - imagine the awkward offspring of HAL and Alexa, but without the charisma. I struggled to finish the book because of this.

I persisted to the end because of my lack of knowledge regarding the NK regime (and have awarded 2* to recognise the glimpse it has afforded me), but was glad when it was over.

nothing to envy- wow

This was the first audio-book that I'd listened to and it told a facinating account of the lives of people in North korea. Living is hard, and for those who don't starve to death some do because growing/ selling food is against the communist ideal, and yet the regime can't provide for people. Its a regime that is utterly corrupt and in denial. The stories of people who have escaped are remarkable- if you think you have an idea of what goes on inside North Korea- read this cos you probably don't.

I enjoyed listening to this book a lot. It was fascinating to see inside the lives of people who had lived in North Korea, including those who had left with mixed emotions, or who did not really wan to leave at all. The narration annoyed me a little given her accent, but that may be more to do with where I come from than the accent.

An amazing true story bringing the problems in North Korea into sharp focus. Whilst political games continue to be played on all sides the north koreans continue to suffer. its another cambodia circa 1979 waiting to happen all over again

Barbara Demick sheds new light on the secretive North Korean state by exploring the personal lives of defectors. While she covers a number of gripping tales in an excellent journalistic style, this audiobook is sadly let down by an awful reading performance. Ms White, the narrator, reads slowly and hesitantly in a terribly melodramatic manner. At times she seems to be halting, on the verge of tears. In the end, she fails to do justice to the gripping material she's reading, turning a series of fascinating stories into a long slog, draining the listeners' energy. This audiobook is still well worth the listen but it could have been so much better.

If you like books that make you think, and books real life stories, this is for you

Well written account of inside North Korea from interviews those that were there. Based on a good cross section of society. Surprisingly engaging stories from interviewees who revealed more of their lives than I would have expected.

Narrator's breathing is distracting at first, but you get used to it.

If you like books that make you think, and books real life stories, this is for you.

It follows defectors for a short period after they got out... which is great.

Explains some of the history, and alternative points of view also.

For fiction about North Korea, consider the book The Orphan Master's Son

A very intriguing insight into a part of the world that is closed off but exists right now as we speak. Hard to fathom what their normal is.
Hard to put down.

This book brings great insight into cultural issues, the starvation and deprivation of the 1990s Arduous March and the difficulties North Koreans face when defecting to South Korea. Its main problem is that it is 10 years out of date - a contemporary version in a new book is needed to help understand the North Korea of Kim Jong-un and the nuclear threat his regime poses.