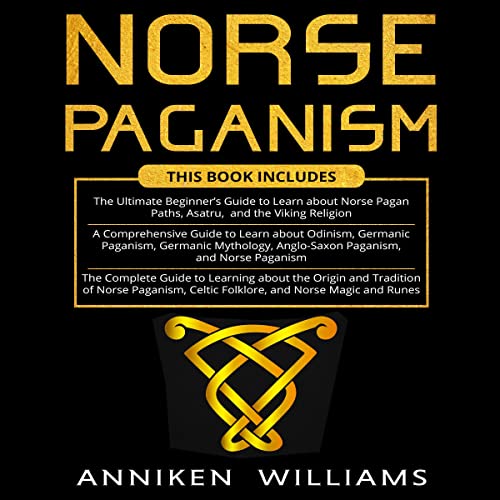 By: Anniken Williams
Narrated by: Ben Herold
Try for £0.00

The complete guide to help you learn about the origin of Norse Paganism, Celtic folklore, and Norse magic and runes.

Have you watched the TV series Vikings and imagined yourself sailing on a longship and conquering new lands?

Do you think it looks thrilling and exciting to have lived in such a primitive manner and living every day as if it were your last? Or does it just look cold and violent, filled with bloodshed and conflict?

The truth is that most media representations of Norse and Celtic times are based on fiction with a smattering of truth and are embellished with a healthy dose of imagination. There are very few written accounts from these societies because the information was passed on by word of mouth. Stories were handed down through the generations and became the sagas we know today but how much of that information is accurate is debatable.

Did you know Asatru, the religion of the Norse, is one of the largest growing religions today? You don't need to be Scandinavian or even European to join. Their ranks are growing, with people around the world turning to a more organic way of worshipping.

This book is all about Norse and Celtic beliefs and how they are just as relevant, if not more so today, than it was over a millennium ago.

This book is an informative and easy-to-listen way to connect with these ancient communities and become more involved with other practitioners today. Find resources that will help you become involved in these growing movements and become part of a larger community.

Explore the fascinating religion of the Vikings.

This book is a deep dive into the myths and the religion that shaped the culture of the Vikings and the Saxons, who later migrated to England.

What listeners say about Norse Paganism: 3 in 1

They'd rather a person do their own research instead of going from door to door or preaching to everyone they meet. Also, paganism is very open to all different religions and does not put any religion down.

I was interested in learning more. I learned a lot from this book, from some of the more recent beginnings of modern paganism to the earth's and nature's cycles and how they are honored in paganism.

You can see where a lot of their rituals originated, by reading works such as this one.
I bought this to start my journey as a pagan, along with two other books.

I have always been fascinated by ancient civilizations and the Norse culture is no exception. Fantastic book, well written, and very detailed.

This is a very basic look at earth religions. It is perfect for beginners who don't have any understanding of the practices and beliefs. The scope is comprehensive and includes everything from deities, beliefs, wheel of the year, rites of passage, rituals, symbols, and tools.

This is a must-have book for anyone interested in learning about Paganism. It's packed with info and even includes easy-to-read descriptions of different variations of Paganism. I've always been interested in the mystery behind this religion but was afraid to ask too many questions. This book gave a perfect insight and cleared up the confusion.

I did not know Norse mythology and I bought this book to learn more, I must say that it explains everything simply and effectively so that even those like me who do not know anything can get a good culture of this mythology

A nice informative book. I know quite a few pagans and read the book to try and understand their beliefs. I was amazed by how much Paganism already touches our lives.

A good introduction to paganism that will leave you wanting to know more. Recommend to anyone new to paganism seeking to learn the basics of what paganism is,...

This is easy to listen to, with a comprehensive overview of items such as the Pagan calendar, deities, rituals, symbols, and a lot more. I like that there's even a quiz included in the back of the book to help you determine which tradition might best suit you. There's also a good glossary and resources, as well as references.

A good and interesting, and sometimes inspiring read.Very informative and thought-provoking for someone exploring their reality.

It is very useful as well as interesting and will interest anyone who is passionate about runes or wants to discover their secrets.

The Pagan way explains how inclusivity and diversity are the strengths of nature and this religion, as well as the personal responsibility required to maintain integrity, interconnectedness, freedom of choice, and spirituality. Symbolism and ritual are described succinctly. I recommend this book to those searching for something other than organized religion and who find more solace in nature than inside a church. The author provides resources for further research.

I have learned a lot.

This is information packed in a beautiful easy to listen. yet hits on a lot of info that other books on paganism do not cover at all. The author doesn’t hold back on all the different aspects that need to be considered to get a full, broad-spectrum view of Paganism.

This book was super enjoyable!

You could say that I was an occasional fan of Norse paganism since I have come across it and have learned a bit about it but this book made me fall in love with it! This book was super enjoyable!

I was very surprised

I was very surprised by this book, the author writes many topics about Norse paganism. From Norse mythology, Norse myths and tales, the runes ... to runes activation and other rituals. I liked it very much, I recommend it.

Interesting AudioBook to learn about the history of the Norsemen over the centuries. One chapter is dedicated to myths, tales, and gods. The author explains in detail for beginners. It is written clearly and fluently.

When I became interested in paganism I felt completely overwhelmed by what I was reading on the Internet, I couldn't make head nor tail of anything so I thought it best if I bought a book.

There is an excellent analysis of the Wheel of the Year, and the holidays associated with the Pagan calendar. All of which I found most helpful in my practice.

Simple rites are given near the end that can be used by a sincere person to begin their journey. I like this book. It is to the point and practical. A very good addition to the new or old practitioners' library.